END_OF_DOCUMENT_TOKEN_TO_BE_REPLACED

Dungeon of Darkness, Pekin, Illinois’ longest running haunt, had a great Halloween season this year with the integration of new rooms and new scares. The haunted attraction, ran by Matt Ruder, his wife Beth Ruder, and Dennis Shea as well as many others involved have made an impact in Pekin for a long while with gruesome scares to startle all ages.

Matt Ruder, also most recently won a contest through DirectTV, for his great makeup and costume for his character in the haunt named Havoc. This happening also gave the haunt attention as well as a spot on Central Illinois’s WEEK News 25. These highlights have helped the Dungeon of Darkness gain local recognition.

Bobby Lee was also involved in the haunt for a long time and was remembered for his scares, while having parted ways with the group this year for his own reasons. The team of Ruder, Shea, and Lee were a major part of the attraction with their detailed costumes and makeup as a group of clowns. Their efforts made the haunt an outstanding one due to their ability to catch people off guard and scare them effectively.

Everyone included in the attraction worked long hours to make the rooms and scares a success. The staff and large amount of people enlisted in volunteering made this year a positive one for the Dungeon. Additionally, the long hours spent on outstanding makeup by Beth Ruder, appropriate costumes, and awesome scares in rooms that all had a different theme made the Dungeon the haunt to visit this October. The major draw to the Dungeon was the enthusiasm showcased by everyone involved and the ability to get into character convincingly for each scare.

Many of the rooms this year involved different themes opening with a freezer with Scott Jackson as a bouncer, then headed to a vampire rave room with loud music and vampires feasting on wounded humans. The VIP Room with vampire bouncer Stella Link and following with a head vampire lunging for another victim scared many as patrons continued on through the maze of various room types.

Other highlights include: a zombie room with various zombies, a butcher shop with a creepy butcher shop keep, and various other surprises. The details added to each room with lots of preparation made this year’s attraction exciting and scary. The fear factor was definitely in the imagination and creativity of the haunt’s creators.

For more information about this great haunted attraction, check out the Dungeon of Darkness page on facebook at: http://www.facebook.com/dodpekin and look forward to next year’s
horrors as Halloween approaches. Also, check out the WEEK News 25 news piece on the Dungeon online at: http://www.centralillinoisnewscenter.com/news/local/Haunted-House-Safety-Tips-132755463.html. 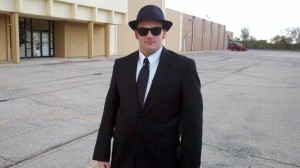