END_OF_DOCUMENT_TOKEN_TO_BE_REPLACED

October 2015 was officially decreed Oak Awareness Month, or OAKtober, in Illinois. The initiative to recognize the plight of oak forests was spurred by The Chicago Region Trees Initiative and its partners throughout the state. It is part of a decades-long effort to build a public understanding of the ecological peril that our native woodlands are experiencing, and time is running out for the healthy future of oak woodlands in the Midwest.

At first glance, one wouldn’t think there is anything wrong with woodlands in Illinois. As a matter of fact, the number of trees and the amount of forest cover has increased steadily in Illinois in the last century. Unfortunately, many of these recently developed woodlands have little resemblance to the ancient oak woodlands that once existed in Illinois. There are around 20 species of oaks native to Illinois, and ecologists consider oaks as a “keystone species” in our forest. They produce large amounts of seed in the form of acorns that are important for wildlife. Their roots interact with other plants and fungi to form a living matrix in the soil. Their leaves, buds and twigs are food for numerous native insects that in turn provide food for countless species of birds. Oak dominated forests are truly the epicenter of Illinois biological diversity . . . and they are in trouble. 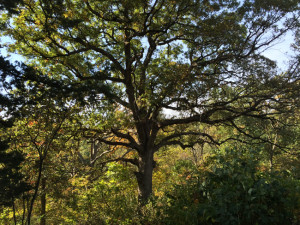 The oak tree’s ability to reproduce in woodland is directly tied to the ability of sunlight to reach the forest floor in adequate amounts to allow for the growth of oak seedlings into oak saplings. If light levels are too low, the oak seedlings starve and recruitment of young oaks into the forest ceases. In our Peoria Park District Natural Areas, we saw this evidence 25 years ago. We conducted studies of the age and composition of trees in Forest Park, Detweiller Park, Robinson Park, Camp Wokanda and Singing Woods. In most areas, new oak regeneration hasn’t taken place in over 60 years. Small pockets of new oak recruitment were taking place in areas that had recent disturbances of wildfires. Here was a clue as to an important part of the ecology of oak woodlands.

In areas where oaks were not reproducing, fairly dense stands of young sugar maple had grown up in the understory of the old oak trees. These sugar maples are well adapted to growing in the shade of oaks, but their success came at the sacrifice of any new oak trees having enough sunlight to stay alive. In areas where there was evidence of past wildfires (30-50 years ago), the fire thinned the young sugar maples out, and oaks were able to grow. Fire, it seems, is a friend to some trees, but not to others. Sugar maples with their small seeds, and tendency to put more stock into growing tall, rather than building root structure, have a hard time growing in areas where fire frequents. Oaks, on the other hand, have large seeds that help establish seedlings with large root systems. They have corky bark that insulates them from the heat of wildfires. If a fire happens, they can sprout from the ashes, even if their tops are consumed by the flames. The sugar maple doesn’t have those adaptations in its bag of evolutionary tricks. The sugar maple banks on a period of time when fire is scarce. It puts energy into creating millions of small seeds that the wind carries to new ground. The seedlings grow fast enough to shoot up in the forest, intersecting the sun’s rays to fuel its growth.

If you went through a basic ecology class in grade school, you probably learned the term “forest succession.” It’s where a young forest comprised of certain species of trees grows into a climax forest comprised of entirely different species over hundreds of years. What we are learning about forests is that sometimes these simple models are just too, well . . . simple. There is no doubt that oak woodlands played a dominant part of the Illinois landscape since the end of the last ice age. They were the “Climax Forests” of our region. It is also evident that the oak forest community has only begun to decline in the last 100 years. It is no coincidence that this recent decline coincides with our modern impact on the landscape. It is caused by the effects of our activities that fragment and isolate nature to small areas. Therefore, it is something that only we, as a species, can correct. We are the “keystone species” now. What will we do to fix a problem we have created? Time will tell. All of the species that once depended on the oak forest are waiting to see if “OAKtober” is something more than a marketing gimmick.

If you would like to take an active part in restoring the health to oak woodlands, become active in organizations such as Peoria Wilds, Peoria Audubon, HOI Sierra Club, and many others. Feel free to contact the staff at Forest Park Nature Center 309-686-3360 to learn more.