END_OF_DOCUMENT_TOKEN_TO_BE_REPLACED

“We have a revolving door of poison,” said Dr. Brian Bostwick, assistant professor of clinical pediatrics and medicine at the University of Illinois College of Medicine at Peoria.

Once children are poisoned by lead, they face lifelong problems. There is no “cure” for lead poisoning, and research is confirming that lifelong harm is done at lower levels than previously understood.

The only safe level is zero, Bostwick said.

In Flint, the director of the pediatric residency program put it this way: “If you were going to put something in a population to keep them down for generations to come, it would be lead.”

Bostwick called lead poisoning levels in Peoria children living in zip codes 61603, 61604, 61605 and 61606 “frightening.” Nearly half of all children under age 6 in the entire city of Peoria reside in these four zip codes. The highest rate of lead poisoned children was 27 percent of children tested in zip code 61606. The average for those four zip codes is 13.5 percent.

The 2013 Illinois lead surveillance report indicates 14.8 percent of children under age 3 tested for lead in Peoria County had elevated levels compared with 8.1 percent in Cook County.

“The problem we are creating in Peoria will stay in Peoria,” Bostwick said, noting many of these children will need additional resources for life and they are likely to remain in the community where they were born.

Dr. Stephen Lasley, a metal toxicologist and professor of pharmacology at University of Illinois College of Medicine at Peoria, said research into developing medications to help children with lead poisoning has lost most of its funding.

Without a new drug treatment, there is little that can be done once lead has become embedded in children’s bones. When the governor of Michigan states he will “fix the problem,” he fails to communicate there is no fix for children once they have lead poisoning.

“No one is going to say your child is harmed permanently,” Lasley said, acknowledging that the harm is, in fact, permanent.

However, he said Head Start programs can help children develop favorable attitudes toward school and learning. That and a healthy diet rich in calcium, iron and zinc can help the body suppress lead absorption.

The best public health policy is to prevent exposure, Lasley said, but diet and education can help after exposure has occurred. He’d like to see restoration of research funding looking for a medication or supplement that can bond with lead and excrete it from the body with urine. For example, there has been some research into a compound in green tea that diminishes absorption of lead.

The Peoria City/County Health Department recently received another $3 million grant from the U.S. Department Housing and Urban Development. Once children with lead poisoning are identified and the source is confirmed as household exposure, the grant helps fund a program that moves families to lead-safe homes and funds renovations that remove lead contamination from homes. However, Bostwick said unless the property becomes part of this program and the home is renovated and sources of lead are removed, the next family moves in and children are again exposed to lead.

The HUD grant helps pay the cost of home lead mitigation that can involve removing old doors and windows and replacing them with lead-free materials. Most of these homes are in low-income areas and are poorly maintained by landlords. The cost of remediating Peoria’s housing stock can exceed tens of millions of dollars.

“The financial burden to replace or mitigate is astronomical,” Bostwick said, “but we can’t afford not to do this. We have homes that are poisoning children. We have a rotating door of poison.”

According to the HUD grant application, there are about 23,000 housing units built prior to 1978 when lead-based paint was used in the four zip codes with the highest number of children with lead poisoning. The current grant is expected to cover 180 housing units over three years.

“The developmental issues caused by lead further increases the divide. These children have even more issues to combat. This is a huge public health concern,” she said. “It destroys generations. We are fortunate we have had legislators in our area who understand how huge this issue is.”

“This is not just a health problem. While it falls in the world of health, causations down the road include schools, discipline, learning issues, zoning and urban development,” Hendrickson said. “We see effects lead has on the body in the adult population in prisons. Few things have such a large harmful impact on the individual and the community.”

The U.S. Environmental Protection Agency requires that samples of tap water be tested for lead contamination. Illinois American Water Co. issued a statement indicating the company is in compliance with all EPA regulations for lead, and the treatment facilities in Peoria add a corrosion inhibitor, orthophosphate, to protect the water distribution system infrastructure.

Wil Hayes, director of environmental health with the Peoria City County Health Department, said water is not the source of most childhood lead poisoning in Peoria. Most cases involve lead dust from doors and windows in homes built prior to 1978. While there is no current requirement that a housing unit be lead safe prior to rental or sale, property owners must provide notice if there has not been any lead abatement.

Hayes said homeowners should be cautious when doing any home remodeling. After working on a project, people should wash their work clothes separately from other family laundry.

Houses built prior to 1978 could have lead in pipes, solder or fixtures. Whenever water has been standing in pipes such as over night, Hayes said homeowners can flush the system by running water for four to eight minutes.

“This is a problem that affects everyone,” Bostwick said, noting that IQ is plotted on a bell shaped curve, and a shift down of 5 lost IQ points on the low end, diminishes the entire population.

“It’s easy to be paralyzed by the magnitude of this problem,” he said. “But this is a problem we can’t afford to ignore.” 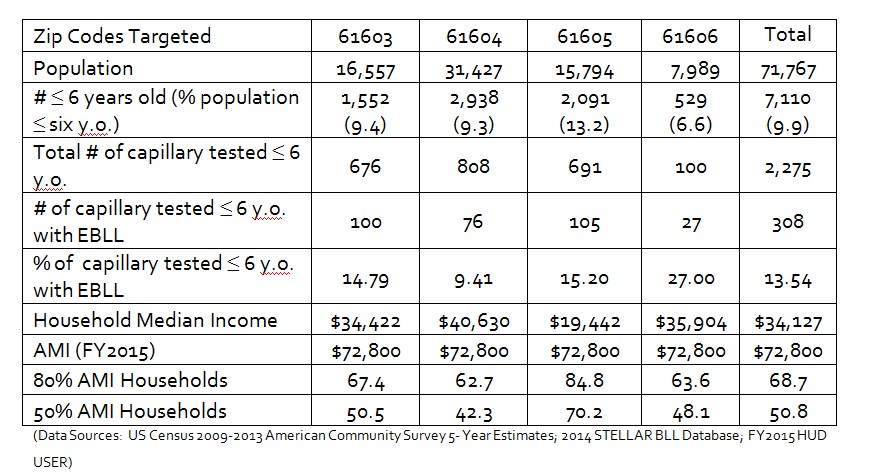 The Peoria City/County Health Department completed lead mitigation on nearly 200 homes with a 2011 HUD grant covering three years of work. The health department had a waiting list of more than 200 homes when it was recently awarded another HUD grant for lead mitigation. The grant focuses on homes in the 61603, 61604, 61605 and 61606 zip codes. In 2014, there were 456 children with elevated lead levels above 5 micrograms per deciliter in Peoria County and about 70 percent of them were within these four zip codes. The chart showing population shows household income within these zip codes compared with area median income (AMI). 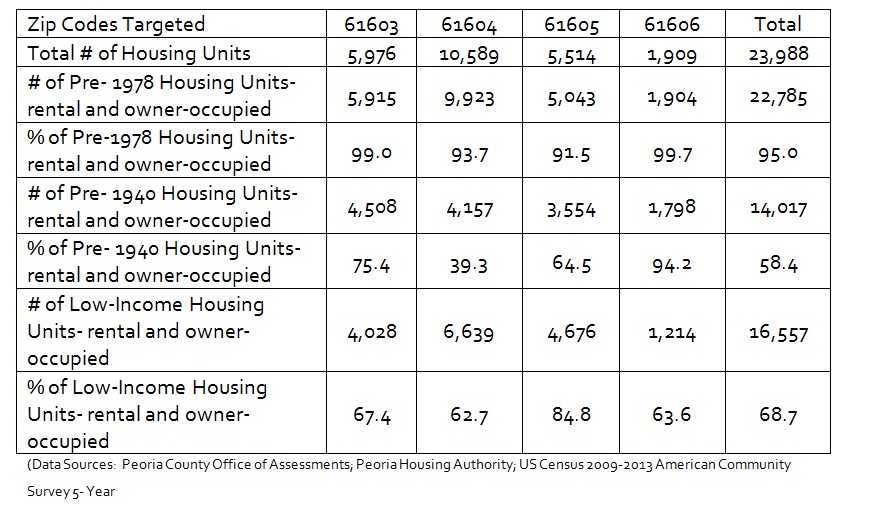