END_OF_DOCUMENT_TOKEN_TO_BE_REPLACED

The story goes that Alice Algae was a wonderful cook who had the special ability to take sunlight and whip up a wonderful meal. Alice had a hard time of it though, while she could feed an army, she wasn’t very handy about building a place to live. This limited her ability to survive in places that didn’t meet her specific requirements for shelter. Franky Fungus, on the other hand, wasn’t skilled at all in the culinary arts. As a matter of fact, he usually had to depend on someone else’s scraps and leftovers to survive. Franky was good at building things though…. Wonderful structures that could survive in a variety of locations.

As you can guess, it was quite advantageous for both Franky and Alice to strike out a relationship. Alice provided food in the form of photosynthesized sugars while Franky built a structure that allowed for the protection of Alice. The union goes down as one of the best marriages in ecological history. They took a “lichen” to each other, even though some have said that their marriage was on the rocks.

This is a fun story to tell folks on a general nature hike, and it is a good description of what a lichen is. It is a story that is a bit simplistic. If we look deeper into this relationship between fungus and algae, the story becomes much more fascinating.

There are around 14,000 species of lichens in the world. In North America, there are over 3,600 species. They are found from pole to pole and from the intertidal zones of oceans to the highest peaks of mountains. They grow on a variety of surfaces from soil, rocks, tree bark, rotting logs and even on the backs of living insects. Ecologically, they play a crucial role in succession, often being the first things to inhabit a rock surface and can set the stage for mosses and vascular plants to grow later.

From our simple story, we know that lichens are composed of a fungal component. While we are familiar with fungus that form mushrooms and fairy-rings in our yards, the fungi that are found in lichens are, for the most part, from the group of fungi known as Ascomycetes, or “sac fungi.” There are over 30,000 species of Ascomycetes, almost half of which form lichens. Lichens have an interesting evolutionary history. Since there are so many nonrelated species of fungi associated in lichens, there isn’t a common ancestor. It is an example of how a good evolutionary step can develop independently and simultaneously.

The other part of the lichen is the algae. Unlike the diverse number of fungi associated with lichens, the number of algae found in lichens are much fewer. There are about 25 genera of green algae and 12 genera of blue-green algae, a few golden algae, and one brown algae that make up this component of the lichen. These algae form what is known as the photosynthetic symbiont (photobiont for short) in the lichen. They provide the food for the fungi.

Since lichens are composed of two organisms, scientists 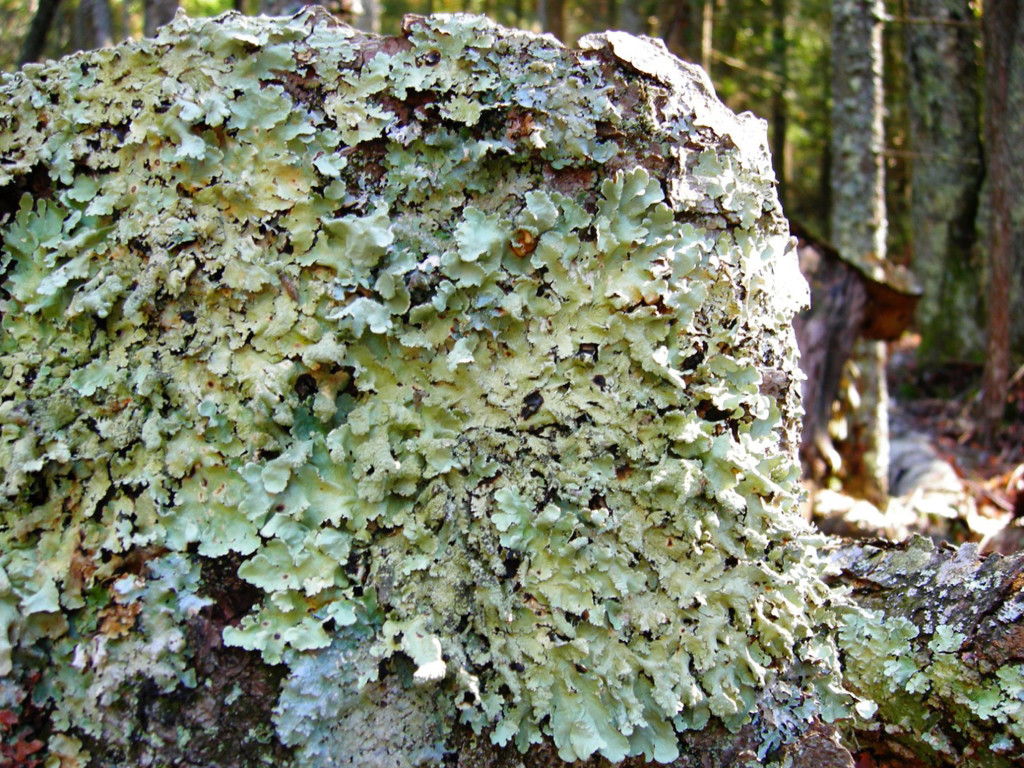 can separate them and grow the components independently. If the lichen has a photobiont of a green algae, the resulting culture of algae will be a green colony composed of cells that have very little resemblance to those found in the intact lichen. If we try to culture the fungi of a lichen, the result is a lump of hyphae that looks nothing at all like the lichen. These two organisms truly need each other to create the lichen. If we mix the cultured algae and fungi together in the right condition they will create an association resulting in a structure that resembles the parent lichen. It’s like a broken Humpty Dumpty reassembling itself. The process of these two organisms forming something that looks like neither is called morphogenesis. It is a genetic miracle in which the algae somehow turns on or off the genes within the fungus and cause it to grow into the finished lichen structure. It is a process we are just beginning to understand. We do not know how it is done, but the ability that it can be done has profound implications in understanding cell transformations. In the future, we might look to lichens and learn the secrets to solving many diseases.

Alice and Franky can be found all around us. The next time you see a spot on a boulder, or a patch on a tree, take time to get close, use a hand lense, and take a peek into their world. Don’t worry, Alice and Franky won’t think you are nosey. As a matter of fact, once you get to know them, they will invite you in and you will be fascinated with lichens before you know it.