END_OF_DOCUMENT_TOKEN_TO_BE_REPLACED

“Sticks and stones will break your bones, but names will never hurt you,” goes the children’s rhyme.

In Canton, some 40 miles southwest of Peoria, it might be said, “Names will never hurt you, but fists can.”

On May 29, a misunderstanding near a rope tree at Canton Lake north of the campgrounds there apparently escalated into a verbal exchange, which grew into a shoving match, and then exploded into violence – violence seemingly shaded with the dark venom of racism.

Carrie Weller, 42, of Canton and her sons Shane, 19, and Corry, 22, were eventually arrested and jailed in the attack on 15-year-old Dedric Foley, whose father is African American and mother is white.

Shane’s scheduled to go on trial Aug. 1; Corry and Carrie are set for Aug. 29 court appearances.

Most of the media attention since Memorial Day weekend has died off, but the incident continues to nag at consciences throughout the area and spark concern about current headlines and uncomfortable memories.

Fulton County has a contradictory history, reliably voting for liberal political candidates on the one hand, but also being the scene of a 1995 Ku Klux Klan rally – around the same time Dedric’s mother Tina says a cross was burned in her yard.

Organized by the Chicago-based Original Federation of Klans, that ’95 rally drew about 200 white people around a 30-foot burning cross at the center of a field between Ipava and Duncan Mills littered with flyers that said, “The only reason that you are white today is because your ancestors believed in and practiced segregation yesterday.”

Besides a few masked and hooded Klan members in the familiar white robes, the rally featured Imperial Wizard Ed (Melkonian) Novak, former Illinois Grand Dragon of the Knights of the Ku Klux Klan, who called for people to fight those seeking integration (and who would concede that many of the Klan people had come from Alabama, Iowa, Kentucky and Wisconsin).

However, a peaceful anti-Klan demonstration was held that night at Canton High School.

“I’m proud to be from Illinois,” says Dedric’s older brother Jordan. “I tell people from Alabama it’s not like that up here, and now some people tried to drown my brother, calling him the N-word, ‘Kill him….’ ”

Tina adds, “I’m not condoning my child’s behavior. He was talking to a friend and someone told him to shut up and then threatened him and he said ‘F you, B.’ But it was talk. And they all jumped on him.”

In court testimony at a preliminary hearing, Canton police officer Keaton Canevit said he spoke to several witnesses and the victim – who the officer said showed no signs of intoxication, as had been alleged.

Canton Detective Josh Wages added that witnesses reported that Shane Weller initiated physical contact by flicking Dedric’s eyebrow ring and the juvenile shoved him away, after which Shane struck him.

As Shane was hitting the 15 year old, Corry grabbed Dedric’s lower body and the two shoved him into the water.

A witness – a white kid, Tina says – caught some of the melee on a smartphone and brought it to her and she showed it to local police. A woman can be heard on the video encouraging the attack, adding, “Kill that n*****!” ”Drown them f***ing n******!”

The brawl lasted less than 15 minutes, but its impact could be long-lasting.

With the new evidence, the Fulton County State’s Attorney’s Office added felony charges of aggravated battery, mob action and commission of a hate crime. After their release from custody on original charges of battery, and after warrants had been issued for the more serious charges, Carrie and Corry were apprehended and Shane evaded capture for a while. But by June 1, police from Canton, Pekin and Creve Coeur had all three back in the Fulton County Jail in Lewistown.

Hate-crime legislation was passed in bipartisan action in the ’80s and ’90s during the George H.W. Bush and Bill Clinton administrations, intending to deter violence motivated by bias. Penalties for people convicted of hate crimes alone range from probation to three-year terms in prison 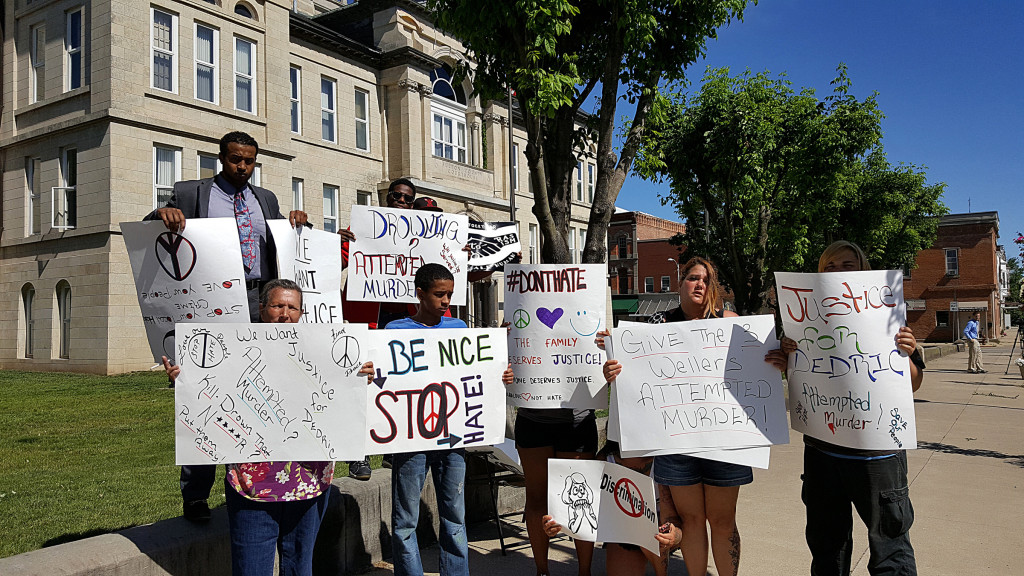 PHOTO BY BILL KNIGHT
A small group demonstrates outside the Fulton County Courthouse June 29 while people accused of a hate crime appear at a preliminary hearing.

FBI data show that between 2008 and 2012, African Americans were victims of hate crimes almost twice as often as Lesbian-Gay-Bisexual-Transgender people, and six times as often as Muslims.

“Hate crimes – committed solely because the victims have a different skin color or a different faith or are gays or lesbians – leave deep scars not only on the victims but on our larger community,” Clinton said in 1997. “They are acts of violence against America itself.”

And west-central Illinois, of course.

“I’m not going to allow my son to be treated like some piece of trash. He’s not,” says Tina, who says she’s also had conversations with the FBI.

Meanwhile, the family says they face threats they’ve heard about, and they worry about a rumor of a “hit” on the youngster.

“I guess I’m disappointed in Fulton County, although I’m not blaming the whole county,” Tina says.

But we could blame hate.