END_OF_DOCUMENT_TOKEN_TO_BE_REPLACED

Central Illinois may well be the Saudi Arabia of water.

“There’s extreme value in the water,” says Bryan Stubbs, executive director of the Cleveland Water Alliance. “It is the new oil.”

It is safe to say most of us don’t think of water that way. In this area, you expect clean water and plenty of it. Unless you’re a civil engineer — or maybe a CEO — you probably don’t think about water at all.

The League of Women Voters of Greater Peoria wants that to change.

Look at Arizona and Southern California. Southwestern states have been fighting over water rights for decades. As just one example, earlier this year the Navajo Nation Council cut a deal with Utah to get at least some of the water which has bypassed tribes living in poverty and been sucked up by affluent boomtowns like Las Vegas. Western tribes are in negotiation with the U.S. Department of the Interior over 17 more water rights cases.

Look outside the United States. Worldwide, an estimated 780 million people do not have access to decent water and 2.5 billion people lack access to sanitation. According to the Centers for Disease Control and Prevention, about 2,200 children under five years of age die from diarrhea each day, mostly due to unsafe drinking water. Millions more people are infected with parasites and diseases from inadequate sanitation. 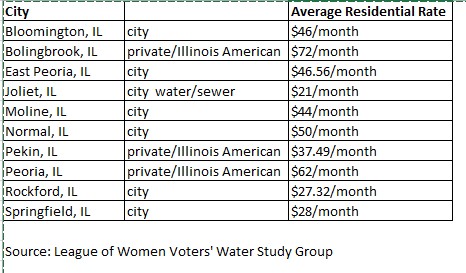 If you don’t want to look elsewhere, look at Peoria a century ago. Before the national income tax in 1913, whiskey provided a third of the U.S. government’s revenue, and Peoria paid the biggest share. Before Prohibition, dozens of breweries and distilleries took advantage of abundant groundwater and the Illinois River.

Prohibition is long over; both those resources remain.

Stubbs says corporations like Levi Strauss are planning for a future where water is scarce. Even now there are places where “you can’t buy water, at any price,” which is an opportunity for areas where it is abundant.

This is a different perspective for Central Illinois, where water mostly makes news when the argument over public vs. private management resurfaces. Already, Peoria is unusual for two reasons. While 85 percent of America’s water supply is handled by public bodies, the city has a private franchise. And, unlike most cities with outside management, that franchise has been up for renewal every five years since 1889.

The current agreement expires in May 2019, but the City Council must make its decision six months earlier. Hoping for a vigorous debate, the League of Women Voters of Greater Peoria, a nonpartisan organization, has begun its own water study.

About six months ago, the LWVGP began to wonder about water. It didn’t think citizens were getting all the facts. While most people appear satisfied with the service provided by Illinois American Water Co. — and skeptical about the city of Peoria’s expertise — League members suspect they don’t understand the costs or the alternatives.

Without taking sides, a study group was instituted in May.

“The study is important because information on this issue was ‘light’ or ‘lite’,” said president Cheryl Budzinski. “The community spends a lot of money on their water bills and the question of whether we are getting much for the money could be addressed in the public sector. But there is a wall because Illinois American is a private company which doesn’t provide detailed information about utility expenses in our community.”

For example, she says, local revenues go to pay dividends to investors and replace infrastructure in other communities.

Budzinski helps the study group, which has members with backgrounds from law to journalism to public service. The City of Peoria has sent representatives. Illinois American declined to participate, and declined to comment for this story, as well.

“I got involved because I did not know much about the water company buyout option, and I wanted to learn more,” said co-chairman Ryan Hidden. “Access to water is a human rights issue and recognized by the United Nations. The availability of water is essential to life and is coming under increasing pressure as the impact of climate change becomes more clear. It is important to make sure water is available to everyone and to find the best way to accomplish that.”

The group decided upon one deceptively simple main question: Does public or private ownership of the water company offer greater benefit to the people of central Illinois?

After a couple months of consideration, that question was found to have six facets worthy of individual attention: Water quality and water supply. Maintenance of the water system. Water rates. Economic viability of the region. Public health. Conservation.

Each facet prompts more questions. Primarily, that means “How does Central Illinois compare with other areas?” For example, when it comes to water rates, how much do Peorians pay compared with other cities?

While the study is by no means complete, the preliminary answer to that question is: A lot.

Although the national conversation on water lags 15 years behind the discussion of energy, Stubbs said, that’s changing.

“People are finally waking up to water,” he said.

The Cleveland Water Alliance recently completed the first phase of a two-part study on water’s benefits and values. In the second phase, with a grant from Coca-Cola, it will examine water’s economic development possibilities.

“It’s important we cherish it, we value it,” says Stubbs. “But also, that we use it as an asset.”

Recent surveys show water awareness rising in his area. He’s also encouraged by national efforts such as “Imagine a day without water” on Sept. 15. (imagineadaywithoutwater.org)

In Peoria, awareness efforts have just begun. The LWVGP study group asks for your help at a public meeting at 6 p.m. Thursday, Sept. 29 at the Peoria Public Library North Branch.

“We chose certain areas to research, but the community has other questions,” says Budzinski. “The public needs to attend to ask those questions and say what is important to them.”

Plato:  “Only what is rare is valuable, and water, which is the best of all things … is also the cheapest.”

Terry Bibo is a freelance journalist and member of the LWVGP water study group. She can be reached at terry.bibo.freelance@gmail.com.