END_OF_DOCUMENT_TOKEN_TO_BE_REPLACED

The Art of Channy Lyons

Chandler Lyons Wildemuth was every bit as formidable as her name.

Like Walt Whitman, she contained contradictory multitudes. She was a writer, an historian, an arts and animal lover. She was both warm and stern, idealistic and practical. She cast a dim Yankee eye on a wasted minute, yet she apparently considered patient hand-holding of the quasi-neurotic to be a good use of her time. 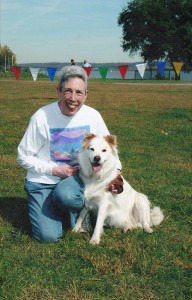 Channy Lyons with her dog, Lucy, at a Bark in the Park fundraiser.

Fortunately for Central Illinois, Channy Lyons spent much of the last few decades suffering artistic fools, gladly. Before her death on Feb. 1, she poured out her days by generously encouraging every sculptor, painter, performer and writer within her considerable range of influence (including this one).

She wasn’t exactly unknown. Among other honors, she was named ArtsPartner of the Year in 2014. Yet Lyons had a knack for staying in the background. Even her obituary, which she mostly wrote herself, omitted her birth and background to concentrate on projects and other people. Then again, just the projects took considerable space.

“If you care about the arts of all types — the humanities — she really encompassed the whole gamut,” said Esther Cohen, a legendary patroness of the arts who has held more than a few hands herself. “She became an automatic leader because she had the vision and the skill to accomplish so much.”

A partial list of Channy Lyons’ oeuvre includes books, articles, workshops, columns, websites, slide shows, symposiums, radio and television programs. A common thread was her passion for artists who would otherwise be forgotten, mostly female, which apparently prompted her to found the Illinois Women Artists Project in 2006.

“These would be women who had not remained well-known beyond their lifetime or who were not prolific but were capable,” said Kristan H. McKinsey, now IWA Project Director. “ . . . Certainly her strong interest in stories and ‘her stories’ about women of the past and how they bring the women back to life for us.”

Via e-mail while on vacation, McKinsey cited the IWA Project, its evolving website and what is now called Citywide Celebration of Women in the Arts as visible parts of Channy Lyons’ legacy. Then she mentioned the less easily quantified contributions — the creative connections — that arise in every conversation with Lyons’ friends and colleagues.

“Very important was her ability to bring people together in promoting and supporting the arts collaboratively and her ability to think up diverse and creative ways to celebrate women artists,” McKinsey said. “I’m thinking of the programming that she thought up during the 2015 exhibit, ‘Making Their Mark: Illinois Women Artists, 1940-1960.’”

Lyons’ husband, Jerry, was her self-described “technical side” and watched her ply her skills first-hand.

“It was more of a collaboration, I suppose, trying to connect Person A with Person B. All of a sudden, they work together and support each other,” he said. “The point has never been her. The point has been prioritizing someone else, getting people to recognize what is going on in the community.”

“First of all, you could never turn her down, her enthusiasm for every project,” Cohen said. “She had an answer for every question, for every doubt you may have.”

“She was just a well-rounded person,” explained Molly Crusen Bishop, who coordinates rentals for the GAR Hall. “About art, about history, about community. She was always pushing for other people. She was very humble.”

Bishop and Cohen were speaking against the hubbub of the Peoria Women’s Club 135th Anniversary tea luncheon on Feb. 16. With their similar agendas of promoting the arts, Lyons had assisted in many club events, including this one. She excelled at research, helping to ensure every detail was accurate from costumes to timelines. Even mortal illness barely seemed to slow her down.

For the past 13 months, Lyons had approached colon cancer with the same gracious tenacity she approached everything else. She answered questions about her health with one or two sentences, then promptly steered conversations elsewhere. Throughout 2016, her approach appeared to work. She may have “gifted” Bradley with IWA in September, but before the holidays she was brimming with plans for next fall’s events. Then cancer roared back in January and she was in hospice care by month’s end.

Now colleagues have barely come to grips with Lyons’ death, much less what comes next.

“Her loss is going to create a serious void,” said Janis Straesser, a Women’s Club member and personal friend who says she benefitted from Lyons’ support of her own fiber art. “There’s just no way around it.”

“As for how she will be replaced, that’s not really possible,” said McKinsey. “Couples such as the Leunigs and the Amdalls are as active and supportive, and have lots of ideas, but they work in different ways. Channy had a different kind of persistence and encouragement. I certainly will do my best to continue what she was doing with the IWA but also to expand it and build upon her success to make it even more important statewide and in terms of regional art history.”

“Amazing” is a multi-purpose word where Channy Lyons is concerned. For the last several years, she has been working on “Amazing Grace,” her biography of Grace Hall Hemingway.

“We’d hoped to have a special program in May,” said Straesser. “We were planning to do her national book launch right here from Peoria Women’s Club. I’m not sure where it stands.”

By now, you probably aren’t surprised to hear Lyons discouraged any services or celebrations of her life. Memorials to Bradley University or Pets For Seniors were suggested instead. But her friends and admirers hope to host something anyway, perhaps in May, perhaps involving “Amazing Grace.”

As far as they are concerned, Channy Lyons is beyond amazing.