END_OF_DOCUMENT_TOKEN_TO_BE_REPLACED

Central Time Ceramics is designed to gauge the production of emerging and established ceramic artists in the center of the United States, Canada, Mexico and South America. Jurors with varied backgrounds and expertise over the years guaranteed a complex range of forms and ideas and provided an opportunity for artists to measure themselves against leading professionals and developments in clay. Carlson recalls, “The idea of Central Time was an attempt to create something a little different from the typical regional sort of geographic restrictions such as contiguous states, which is the most common.”

Carlson noted a number of artists this year are from university programs like John Utgaard, who is an Alfred University grad, one of the most sought out clay programs in the United States, and Chris Leonard from South Texas whose dynamic slab structures have been featured here before. He also mentioned Elizabeth James from the University of Minnesota, Duluth who produces impactful utilitarian as well as sculptural work.

He added that Joseph Madrigal, working in low fire constructions, completed an MFA at ISU and now is teaching at Luther College. Nolan Baumgartner, who makes both utilitarian and sculptural constructions and has an MFA from the University of Utah, was recently a resident at Lillstreet in Chicago. Jess Benjamin hails from Nebraska and generates iconic structures that refer to water rights and conservation.

Eric Bosch who has also been in the show previously utilizes sgraffito which embraces turbulent, undulating surfaces. Michael Ware’s abstracted compositions are ambitious and celebratory and recall abstract expressionist studies employing tasty earth-toned glazes bundled and served on a saucer.

The most complex, and canny work is that of Bradley alum Angela Dieffenbach who addresses social and psychological aspects of modern medicine. Dieffenbach who resides in Chicago, writes that her work is “tied to strange experiments and medical innovations as well as an interest in post-natural beings — organisms that are artificially constructed. She says that while she often exaggerates that content for the sake of composition, the work is based on “real experiments or practices that are often unimaginable.”

Her earthenware construction “PostNatural Vascular” grew out of an interest in the use of toad venom in the treatment of heart disease and is a reflective of the use of amphibians in both eastern and western medicine. Dieffenbach says she gravitates towards animals that she is familiar with as a nod to her rural/farming background near Peoria.

Challenging craft production like Dieffenbach’s, which is rural and urban and has both social and aesthetic implications, succeeds with or without the endorsements of coastal art institutions or artificially stimulated art market schemes. Ceramic artists of note are dispersed all over the country in variously sized communities and academic programs in all of our cultural zones. These more autonomous communities empower artists to focus on meditative, labor-intensive practices. The results are unequivocally independent and more apt to develop and educate audiences about historical materials, methods and themes — not to mention artists, mentors and patrons who live in the vicinity. The cultivation, contribution and critique of site-responsive art, crafted to reflect the inherent logic of a particular medium, is a worker’s slog and a ceremonial rite. It’s just the opposite of the artist as conjurer with exotic illusions and vogue contrivances. Here we have aesthetic objects but much, much more. The production of hybrid clay forms that speak to the relationship between utility and imagination is consistent and more empirically engaged when it has some distance from the business of the art world. Clay is a leading medium in the mindfulness about custom, place and artistic genealogies that spring from the modernist principles of repetition and renewal. Central Time Ceramics is an exceptional illustration. 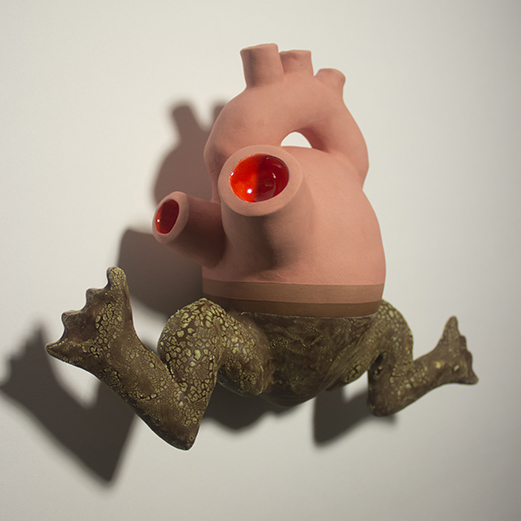