END_OF_DOCUMENT_TOKEN_TO_BE_REPLACED

Racists and neo-Nazis with guns and badges within the ranks of local law enforcement across the country is antithetical to American democracy, yet the evidence is visible and documented by the FBI, Office of Homeland Security and Southern Poverty Law Center.

The overt “skin head” is now a “ghost skin” dressed in suits and uniforms to blend in with regular society but the philosophy of hate, violence and extremism is unchanged.

Peoria attorney Don Jackson perceived the role of radical hate groups in Ferguson, Mo., Charlottesville, Va., and on the Cleve Bundy ranch. All these incidents and scores of other confrontations between law enforcement and the public likely have involvement with white supremacists and hate groups that have either posed as law enforcement or infiltrated the ranks of local police forces.

Research by Southern Poverty Law Center tracks that infiltration and calls it a serious threat to American democracy and the rule of law.

Recruitment by extreme hate groups is accelerating under the Trump presidency and poses a significant threat to the country, said Ryan Lenz, a spokesman for Southern Poverty Law Center.

“Someone who holds beliefs counter to the rule of law should not be allowed to be a member of law enforcement,” he said, adding the infiltration of “anti-government and racist groups is tantamount to the complete collapse of the rule of law.”

One extremist group in particular, the Oath Keepers, claims it has 30,000 members among police, first responders and military, Lenz said.

A search of the Oath Keepers web site shows rambling spiels about government conspiracy theories, personal attacks against Hillary Clinton, John McCain and others and speculation that forces from the United Nations and foreign governments plan to take over America after all American citizens are forced to give up their guns.

Jackson, former president of the state and local NAACP, posed a question at a recent NAACP forum with the two candidates running for Peoria County Sheriff. He asked if law enforcement officers and recruits are questioned on a polygraph test about whether they are members of white supremacist or other hate groups.

The answer was no, the polygraph test given to new recruits did not ask that question. However, following the question, both Peoria County Sheriff Brian Asbell and Bartonville Police Chief Brian Fengel revised their tests. A question about gang membership was expanded to include a question about affiliation with white supremacist and hate groups.

Asbell said membership in a hate group would conflict with an officer’s ability to insure laws are equally enforced among all members of the community.

The polygraph is given to all new applicants, however, the union contract prohibits polygraph testing of existing employees.

Asbell and Fengel said any complaints or suspicions about existing employees are taken seriously and are immediately investigated. They hold officers to standards both on the job and off duty.

“All employees are well-aware that they lead by example, even off duty,” Asbell said, noting the department has explicit standards about social media messaging.

He and Fengel have written policies about social media use by officers.

If someone posts a photo of himself wearing a shirt with a swastika or racist slogan on social media, a red flag goes up, Asbell said.

“I can be selective in who I hire. Why would I take a chance?” he said. “When I go to the high schools and talk, I tell students they are building their resume (with every post).”

Fengel said his department also does extensive background checks. He is not aware of any member of his police force who has connections with extreme hate groups. He called the infiltration into law enforcement “disturbing and sickening. We work very hard with all groups to make the community better. These hate groups generate hate” and that works counter to strengthening the community.

“After someone has been hired, if a complaint is brought to our attention, there is an internal investigation or the complaint is sent to the state police,” he said.

Jackson said the social media post by a Peoria Police officer wearing a t-shirt with the lettering “B.D.R.T.” (Baby Daddy Removal Team) was a racist reference, but it was not the first offense made by the officer who was subsequently fired.

Jackson said he strongly suspects some of the out-of-state “law enforcement” officers who showed up in Ferguson following the shooting death of Michael Brown were actually members of Oath Keepers. They could be identified at the scene in Ferguson with AR-15 rifles.

“What would have happened if members of the Black Panthers or Black Muslim party showed up with assault weapons?” Jackson asked.

He said there is a legal standard called “negligent retention” that could open a city or county to charges of negligence if a department knew an officer was biased, whether against LGBT, Muslim or African American people, but did not take disciplinary action.

“There is an obligation to investigate and take appropriate action,” he said. “Monitoring is as important as screening.”

Interim Peoria Police Chief Loren Marion said there is intense screening of applicants and then ongoing annual training of police officers. The department used to have the same social media policy as the city, but the department is revising the policy and making it stricter. Like Asbell and Fengel, Marion said the department has zero tolerance for membership in hate groups.

There is no uniform standard for law enforcement nationwide regarding membership in hate groups. That creates a situation allowing some law enforcement departments to fail to screen and monitor racist behavior. Without a uniform standard, people are at risk traveling through some locations because they don’t know if they are targeted or protected.

Marion said a uniform policy regarding hate groups would be helpful but would likely have to come from Congress or the Department of Justice.

Jackson said, “Profiling is with us today. The ACLU has affirmed that fact. Our highways are hotbeds of racial profiling.”

Jackson said a uniform policy is needed to clearly state that members of white supremacist groups and other hate groups cannot serve in law enforcement in any capacity.

Marion said his department and others receive regular notices from the Statewide Terrorist Intelligence Center (STIC). He has received no indications to date that hate groups are targeting his officers for recruitment. 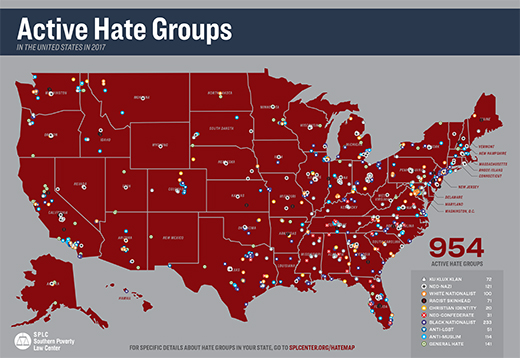