END_OF_DOCUMENT_TOKEN_TO_BE_REPLACED

We had a chance to talk with Allison recently about her vision for the festival. 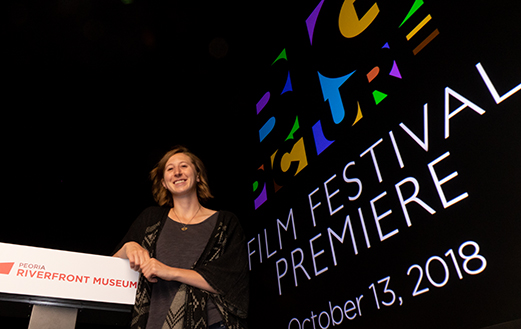 Allison Walsh, program director of the Big Picture Film Festival, is an indepedent producer. She is a graduate of Bradley University, co-chairperson of Yaku digital and a board member of the Peoria Art Guild. (PHOTO BY DOUG & EILEEN LEUNIG)

Doug & Eileen: (D&E) Why hold a film festival in Peoria?

Allison: After participating in the 48-hour film festival the past two years, I’ve realized that Peoria is absolutely ready for another film festival—one where filmmakers can spend more than two days on a film. I have been so impressed by what people can make in only 48 hours, but I wanted there to be an opportunity for filmmakers to get together and make something that might be a longer production, or share something they’ve made and haven’t screened yet in Peoria.

D&E: If you were to dreamscape the future of film in Peoria, what would it look like?

Allison: I believe there is great potential for the filmmaking community in Peoria. We have tons of space, unique perspective, and stories that people in Hollywood aren’t telling because they’re simply not here. I think there is so much value in unique storytelling, so I’d like to see more videographers and filmmakers grow in Peoria. I hope there will be more resources for young filmmakers in the future, which can happen with the right amount of community engagement and determination from creative people.

D&E: What do you hope to see as a result of the first annual Big Picture Film Festival?

Allison: I hope people realize how talented the filmmaking community is in Peoria and Central Illinois. I think there’s a great group here and I’d like us to take the time to celebrate that. I hope people find inspiration, partnerships with other filmmakers and a sense of a creative community here.

D&E: You’ve lined up some great judges for this year. You’ve got Helen Caldwell, the script supervisor from Breaking Bad and Better Call Saul, and Seth Henrikson, the director of Pottersville. How will they benefit the festival?

Allison: I think it’s great to bring in judges who have strong experience and talent in film because we get to hear their thoughts on our films and hear advice on how to grow as aspiring filmmakers.

D&E: Your film Parallel Lines was chosen to be part of the Paris Art and Movie Awards. What did you learn from your experience in Paris that you will be bringing to the Big Picture Film Festival?

Allison: Oh, I learned so much from going to the Paris Art and Movie Awards. I already have ideas for next year’s Big Picture festival. My biggest takeaway was actually that I’m so happy to be a filmmaker here in Peoria. I want to share new perspective and focus on making great work, and I can’t think of a better place to do that right now than Peoria.

D&E: What does it take to make a film?

Allison: It takes a community of support and guts to make a good film. Films can be really challenging at times if you try to do everything by yourself. It’s important to ask for help if it’s going to make the work better (that should be your main goal) and it’s also important to keep your artistic vision –– trust those you respect and also know yourself –– what is your story.

D&E: You recently taught a summer film class at Peoria Public Schools. What were the highlights of your experience with the students?

Allison: The summer film class was amazing. The highlight was taking a field trip to Glen Oak Park and the riverfront to film a few different student films—one group was making a documentary and another was rolling a garbage can (their main character) down hills. It was an exciting class and I was happy to spend some time sharing what I love. The films are available on YouTube by searching for Big Picture Summer Film Class 2018.

D&E: Smartphones have opened the possibility of film making to more people. How do you think this is impacting the film industry and what opportunities does it offer for aspiring filmmakers in the Peoria area?

Allison: Smartphones make it easier to make films –– there’s a lot that comes with that, but ultimately, I think it gives society a better chance of recognizing talent, learning new perspective and experiencing the best films. I’m happy technology has made filmmaking more accessible so it’s not so scary to start. You don’t have to buy super expensive equipment, you can use a phone to share a story no one has ever thought of before. 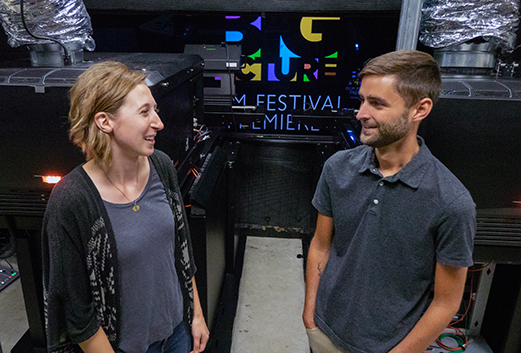