END_OF_DOCUMENT_TOKEN_TO_BE_REPLACED

This year’s Peoria Sculpture Walk raises a few questions about public art –– for Peoria and for urban settings in general. It’s perennially challenging for any artwork to hold viewers attention in the turmoil of urban settings –– particularly if one expects sculpture to accessorize lackluster sidewalks or architecture and still be evidence of an artist’s key ideas. Even when sculpture has the physical dimensions to thwart frenetic business districts, few sculptors have the resources or vision to tame a four-lane border street between the river district and downtown.

Important public art finds a way, formally or conceptually, to transcend the city. Decoration is not an option. Sculpture that has our attention is carefully sited and responsive to communities. In that respect Preston Jackson’s remarkable memorial to Richard Prior is an example that addresses a wide span of local history and popular culture. On the other hand, one of last year’s memorable Sculpture Walk submissions was of an anonymous spirit/figure submitted by Patricia Keck. It was fictive and introspective and its absence now seems like part of the work. Fisher Stolz, who has been an advisor to the project, produces graceful abstract forms that connect easily to the region’s industrial design legacy. These sculptors, among others like Bob Emser, excel in urban environments because they make a cognitive pathway for a historic municipality. The formal sophistication and intellectual depth of their work is the result of a finely tuned balance of materiality and myth.

This annual event, which for the first time did not have impresario Joe Richey at the helm, features some notable variations of sculpture as allegory and commemoration. The current slate is much like the past –– all highly competent sculptors, some with long careers, a few hits, and a few misses. Each year there are works that draw most of the attention. Ray Katz, John Adduci, and Jacob Burmood made exceptionally animated abstract work but his year belongs to one sculptor whose first large bronze performs on all fronts.

Herb Eaton, from Bloomington, nurtures icons of the Midwest such as cornstalks, barbed wire and the Mackinaw River watershed. On the west side of Washington Street he’s reconfigured a sort of post-ruralist subject with a naive protagonist. Eaton’s work is often anecdotal, fragmentary and ritual-based. After decades of mulling over cultural history and our inscrutable relationship to nature, he constructs a tribute to some sublime mortal indulgences.

The piece, modestly/humorously titled, “Mommy’s Broom,” functions on several levels. The first is the form of traditional equestrian statuary, the classic commemorative precursor to post-obelisk abstraction. Eaton has long enthused about commemorative bronze sculpture with its symbolic battle accoutrements and the obscurities of its age, fabrication and aesthetics. He lauds the materials and antique technology that keeps classic sculpture vivid in our hypermediated present. In “Broom,” he conflates the heroic posture of a celebrated warrior with an adventurous child. He’s drawn inspiration from a text by the noted cultural critic E.H. Gombrich, whose “Meditations on a Hobby Horse” offers notes on the radical displacement and valorization of mundane objects as a key element in comprehending the motivations of modern artists.

Eaton’s bronze child, clad only in a loin cloth and a cap with a propeller beanie, is charismatic but not cloyingly so. It’s encumbered by some nostalgia but it’s a subject for critique, more than amusement. “Broom” appears to be a Bildungsroman illustration intended to stir repressed desires for a valorous life compromised by an alarming degree of mischievousness. There’s menace in a Bolshevik-style bomb with a burning fuse at the foot of the figure. There’s sorcery in the cornstalk wielded as scepter. Eaton’s man-child rides his fictive hobby horse, ala Don Quixote, out of a truthfully unchivalrous planet, casting the artist’s hybrid perspective in bronze and scrawling an ode – or is it an elegy? – in stainless. 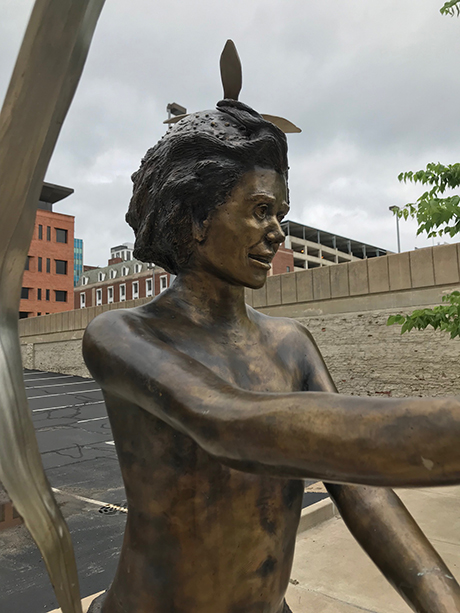 Detail of “Mommy’s Broom” by Herb Eaton –– one of the pieces in Peoria Sculpture Walk. (PHOTO BY PAUL KRAINAK)