END_OF_DOCUMENT_TOKEN_TO_BE_REPLACED

William Butler is widely known in Central Illinois as director and curator of the Contemporary Art Center in Peoria. The Center has been a longstanding institution for bringing together a diverse, challenging, and entertaining body of artists and musicians. The Center offers artists solo shows in a space that provides the scale and visibility only available in venues in Chicago and St. Louis. William’s responsibilities include organizing and managing every aspect of the Center, showing artwork, scheduling musical events, managing over 15 artist studios that help support programs, and seeking other fundraising opportunities. He wears a lot of hats.

William talks about the complexity of the job that he loves.

“Most people assume all I do is curate art and hire bands, but it’s a small part of my daily activity,” he said.

He spends 50-60 hours per week handling correspondence, promotion, maintaining email and membership data bases, planning regular and special events like art education programs, organizing volunteers, etc. With the owners of the building, he helps to oversee general building maintenance and projects for the entire facility. He manages volunteers and one part-time employee. 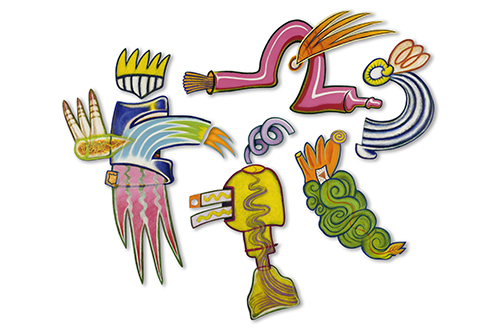 William acknowledges, as a practicing artist, the position is a blessing and a curse. It takes time from his studio, which he maintains on the third floor. While the process of planning and producing the exhibitions is creative and fun, he’s grown more excited about his most recent body of work, one of which, just earned first place in painting at the Illinois State Fair exhibition. The work shown here, titled “Animated Consul” is an example of his “cut out” paintings, initially taken from doodles that he regularly develops into larger works. William often disengages the details from original drawings and arranges them to float freely on the wall. Their unrestrained consciously naïve forms call to mind some of the devices of underground comics chaotic energy, but he turns narrative on its head or deflects it all-together. In this respect he shares a fascination with the genre’s rebelliousness and vulgarity as did many of the Chicago Imagists. But William arrived at his anti-formal language on his own, being absorbed by comics and the various boisterous styles of their best illustrators. His background in graphic design also prepared him for a degree of sensationalist parody which still courses through the work.

William was also influenced by early modernists such as Joan Miro and most interestingly the paintings of Le Corbusier. I can count on one hand the number of painters I’ve met who acknowledge Corbusier, a fountainhead of modern architecture, as a source of inspiration for painting. But “Corbu” is an apropos figure partly because he fully engaged two-dimensional art mediums and collaborated with Amedee Ozenfant in their conception of Purism. The idea was a reformed Cubism and their compositions were more well-behaved, flatter and formal. William was drawn to Corbu’s focus on structure and experimentalism that spoke to his more deliberative side. William then augmented the Purist surface texture and juxtaposed other art languages with a penchant for Surrealism. This led him circuitously to Elizabeth Murray, whose richly corrosive color pallet and contours were whimsical and as sculptural as they were painterly. William’s images became more abstract, but quizzical, and exceedingly funky as he employed more free association and gesturalism.

William exploited the kitschified air that distinguished many ‘70s Midwestern and Californian regionalist painters, printmakers and illustrators. He absorbed imagery that remind some of the Neo-Pop artist Peter Saul whose quivering, acidic images influenced a decade of young High Fructose Magazine illustrators. William’s references to body parts, flower blooms, syringe-shapes, cox-comb details and bric-a-brac mimic lost board game pieces and picture puzzle fragments and are saturated with absurdity. For William they emerge, spontaneously and dreamlike from an imaginary laboratory experiment gone off the rails. Their vague cautionary tales still maintain dark outlined images from comic book illustration and they deflect theoretical analysis with humor and cyclone debris.

The connections to printmaking iconography, comic books and the experimentalism of the original avant-garde are remnants of modernism’s critique of classicism and mainstream culture. William’s work is fun, sure, but it’s also antagonistic to more sober art forms and today’s sanctioned globalist styles. He has a quirky, but verifiable, connection to folk art and neo-primitivism that gripped European modernists as they rebelled against the academy in the early stages of modernism. Decades later, post-war anti-formalists in the States recalled the Surrealists and Expressionists and depicted alternatives to academicism, resisting progressivist kinds of orthodoxy. William Butler contributes skillfully and cheerfully to the still independent, vibrant, introspective pictorialism that continues to resonate for many Midwest artists.