END_OF_DOCUMENT_TOKEN_TO_BE_REPLACED

It’s not everyday that I get stumped when I’m out in nature, but every once in a while, I see something that I have no idea what it is. A few weeks ago, Peoria Park District staff and volunteers were out working on the hill prairie in Forest Park South, along the Pimiteoui Trail. It is a nice little hill prairie with several species of native plants. We happened to be there when the goldenrods, asters and blazing stars were in full bloom.

We were removing invasive shrub species, mostly bush honeysuckle, autumn olive and European buckthorn. These exotic-invasive species can overwhelm a prairie rather quickly. Someone pointed out what looked like Tree of Heaven, another invasive species that can be a problem, so we headed down-slope to have a look. 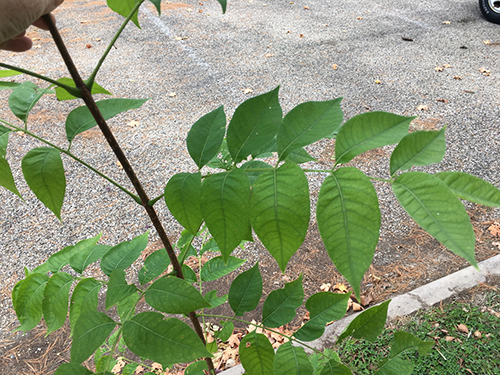 Leaves of the Amur Cork Tree. These invasive trees were found on the hill prairie in Forest Park South. (PHOTO BY MIKE MILLER)

When we got to them, we were all stumped. They weren’t Tree of Heaven. They had pinnately compound leaves similar to tree of heaven, but the leaves were opposite of each other on the stem. The bark was rough. There were clusters of green fruits which were turning dark blue, and the wood under the bark of the branches was a neon-yellow. I can honestly say that none of us knew what we were looking at. There were about a dozen of these trees, all about the same size, growing at the edge of the hill prairie.

I went back to consult some of my tree guides, to no avail. Most of the tree guides I have deal with trees that are regularly found growing in the wild. Since this one wasn’t found in the guides, it made me think that it must be some type of cultivar that has escaped into the wild. Some more sleuthing pointed me straight towards an obscure tree known as the Amur Cork Tree (Phellodendron amurense). This tree is native to Northern China, Japan and Manchuria. It was introduced to the United States around 1856. For the most part, it has become just a benign street tree that landscapers have moved into the mix of “things we can plant that are easy to grow.”

A quick online search shows that the Amur Cork Tree has been documented as an invasive species in DuPage County. Now we can add Peoria County. We are no longer stumped about what it is. We can add it to the list of things that can become an aggressive, invasive species that threaten the ecological integrity of our remaining natural areas. That’s a list I hate to see grow.