END_OF_DOCUMENT_TOKEN_TO_BE_REPLACED

Early in Michiko Itatani’s career she coaxed viewers into unpredictable formal paths in painting and installation discretely probing relationships between radical pictorial composition and societal and geological boundaries. All of her work coincided with the contemplative legacies of reductivism and phenomenology and served as a conceptual springboard for her as a painter. Itatani is now known for having incorporated a more spontaneous pictorialism –– aggressive, extravagant and noticeably arduous. Her practice now circulates around vestiges of civilization that inhabit libraries, observatories and laboratories. Itatani rummages through the 20th century, considering all of its chaotic hits and misses, its sometimes volatile outcomes and staggering innovations.

Itatani’s work is a product of a strenuous and consuming studio practice – often producing exhibitions with scores of meticulously crafted small pictures that accompany anchor paintings regularly reaching widths of more than 100 inches. Yet Itatani’s work has always been about text and structure from dry white paper, canvas, and installations to her fuel-injected, color saturated stretchers and muscled into suitable gallery architecture. Her work is now more readily suspended between an Asiatic and European history, charged with foregrounding the realm of historians, scientists and philosophers. Itatani’s art and language fusion generate a visual text with deference to her subject, but also of its uneasy proximity to mythology. 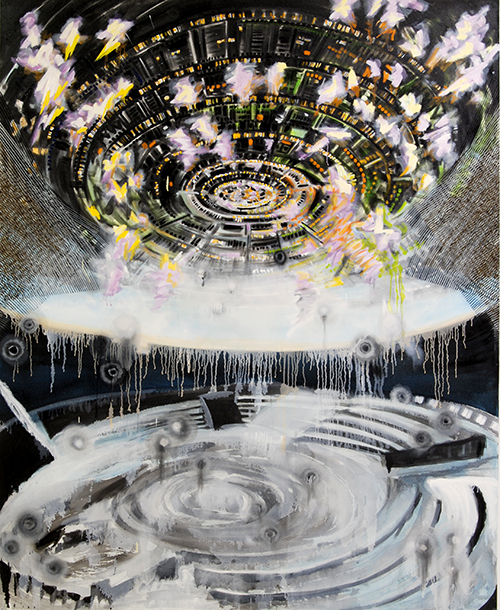 “Polaris,” Michiko Itatani’s epic oil painting from 2016 illuminates the artist’s decades-long epistemological endeavor. Polaris is the North Star, the furthest galactic body in the asterism of Ursa Major and historically consequential as navigators’ or astronomers’ pole star. Its symbol as a beacon is not wasted on Itatani’s geographical and metaphysical mindfulness. Her sensitivity to the idea of inner and outer space exceeds the ideological construction of East and West as it does her residence between coasts. She composes facsimiles to historical repositories, archival monuments, museological edifices, some on the Pacific Rim and some in the Americas – correspondingly representational and abstract. She fuses them with Sumi ink and oil paint in sometimes awkward, explosive relation to one another, erupting from altitudinal vacuums and fleshed out by phantom light sources. In Itatani’s “Polaris,” a science-fiction trope overwhelms the perpetual dome of her night sky, producing nimbus-festooned luster and spirited painterly invention. They crowd space, with opulent, galactic, consecrated and carnal paint with a lingering note about popular culture’s distorted mediation of legend and its deficient centering axis.

For decades Itatani watched friends exit the Midwest for the coasts only to have their work become stylistically undermined or just absorbed by art-monoculture. Itatani opted to stay in Chicago and beside becoming a remarkably gifted and prolific artist, was a key figure in the implementation of N.A.M.E. Gallery. She, Othello Anderson and Guy Whitney were the longest serving members of the project –– the literal and symbolic backbones of a space which was instrumental in re-shaping the city’s image as a one-style town. Chicago continues to afford her the cultural and intellectual resources that transcend the prisons of either art market or art theory campaigns.

Despite a small serving of regionalism that rightfully distinguishes the city, too many Chicago artists are overlooked by its museums. They also remain relatively free of the curatorial contrivances, consumerism and theatricality of coastal art production, however. If Michiko Itatani is not as recognized as New York or Los Angeles-based artists who have comparable exhibition records, her independence and the narratives that identify her orbit, have consequence and no expiration date.