END_OF_DOCUMENT_TOKEN_TO_BE_REPLACED

Most people didn’t hear about some big news this spring. It was good news but wasn’t a surprise, say local arts advocates. But the absence of reporting on it seems to some like the heavy-equipment industry making unexpected gains but getting little notice.

The Department of Commerce in March said that in 2015 the arts and cultural sector contributed more than $763 billion to the country’s economy – more than the nation’s agriculture, transportation and warehousing sectors.

Area arts advocates said they weren’t surprised, and most expressed dismay with a lack of media attention and the related lack of public appreciation – despite popular support for the arts.

“What’s great about this government report is formal recognition of arts and culture as an industry by the economists of the U.S. government,” says Margy Waller from Topos Partnership, a public-interest research group. “In the same way that ‘travel and tourism’ is treated like a real industry, so are the arts.”

Corn Stock Theatre Board member Rebekah Bourland says, “The $763 billion figure is a very big number, but it doesn’t surprise me that the impact of the business of the arts and culture surpasses other more ‘commercial’ sectors.

“Also, the Commerce numbers don’t reflect the amount of human capital invested, particularly the performing arts and theatres,” she continues. “Musicians are generally paid, but thousands of volunteer hours are invested.”

In Illinois, the arts added $25.9 billion to the state’s economy, with $14 billion in compensation for more than 205,000 people employed in artistic/cultural endeavors, Commerce reported.

Elsewhere, the Census Bureau’s last Survey of Public Participation in the Arts shows that 53.8 percent of U.S. adults (132.3 million people) attended a performing-art or visual-art activity at least once that year (2017), up from 50.2 percent five years earlier.

That said, “the public generally does not understand the impact or value of the arts,” Bourland says. “It is a particularly tragic loss within schools, where every child used to have the opportunity to play an instrument, learn to read music, sing in the choir. The football program is sacred, but not band, even though it is proven that exposure to music at an early age increases brain flexibility and mathematical ability. I think the general public is aware of this, but doesn’t give it enough credence to insist on arts education.”

ArtsPartners Executive Director Jenn Gordon says, “What the latest iteration does is provide us with proof that the arts and cultural sector continues to show growth as an industry. It’s not just the nonprofit sector, but also commercial and entertainment sectors, individual artists, Broadway, motion pictures, architecture and design, university programs, etc.”

Apart from audiences, institutions have historically helped underwrite the arts. However, too many contributors see themselves as benefactors, not economic drivers.

“If we invest in the arts, they will bring new life into our city and the economic impact of them will sustain us for years,” Cox says.

Bourland adds, “I have always encouraged the organizations I’ve been involved with to seek investments, not donations. Donations support poverty, illness, education – generosity to improve lives and opportunities of the less fortunate. Investments reap returns, and arts and culture reap returns in ways they stimulate the economy. Money begins to circulate when people go do something. Ticket prices and taxes, dinner out, the babysitter, parking, gasoline – all are associated with arts activities. The arts are a business.”

But as a business, the arts have no hard-nosed group advocating like the Farm Bureau for agriculture or the American Society of Civil Engineers for infrastructure.

“The arts could benefit from lobbying,” Bourland says. “Funding of the National Endowment for the Arts, the Illinois Arts Council, and other organizations has been drastically cut over the past 20 years. For most people, arts and culture are a ‘soft’ cause, but what we remember and what we leave behind is largely what has been created through the arts.”

That legacy starts in the here-and-now.

“A strong arts/cultural sector is essential to the health and well-being of our economy,” Gordon says. “It contributes to the revitalization of neighborhoods, a strong workforce, local government and an enhanced quality of life.”

Echoing Bourland, Cox says, “The public doesn’t understand or really think about the worth of the arts.”
People aren’t regularly informed, they say.

Last month, Peoria magazine editor Jonathan Wright’s affectionate retrospective on Central Illinois’ arts in the last decade was enjoyable, but it was an inadvertent reminder of the lack of day-to-day media attention.

“If the arts were covered like sports, it would make people more aware of their opportunities,” Bourland says.

Commanday agrees, saying, “Media attention is a problem. Coverage of the arts has been one of the first areas to lose as reductions in staff have been made. More coverage might allow for more adventuresome programming, if arts leaders knew they could have enough coverage.

“Decision-makers tend not to focus on the arts, particularly in times when there is so much general stress across our economy,” he continues. “Sports generate big revenues and appeal to the broadest sections of our population, but [coverage] is regrettable, because it is a downward cycle. If more people, especially young people, do not experience and learn to appreciate the arts, fewer will support them. Most importantly: Too few people realize how powerfully engagement with the arts at a young age leads to excellence.”

“I think we do a good job of featuring arts during our local programming,” Newell says. “This comes from covering stories of interest in newscasts and doing more feature pieces on our lifestyle show ‘Living Well’ and our more entertainment-based morning show ‘Good Day Central Illinois’ on WYZZ.”

“If you look at our programming as a whole, you will find a lot of coverage of different forms of the arts,” Newell says. “There may not be a set segment like sports on the 6 and 10, but I feel it balances out pretty well.”

Artists and supporters think more should be done.

“Visionary decision-makers should recognize and understand that future prosperity depends on our continuing leadership in innovation and creativity – not merely the ability to ‘do sums’,” Commanday says.

Gordon adds, “The interesting thing about live-performance experiences is that while they are temporary and fade over time, they possess the ability to inspire us and stay with us long after the curtain falls.”

Indeed, that was recognized in the ground-breaking National Foundation on the Arts and Humanities Act of 1965, which said, “Democracy demands wisdom and vision in its citizens. It must therefore foster and support a form of education, and access to the arts and humanities, designed to make people of all backgrounds and wherever located masters of their technology and not its unthinking servants.” 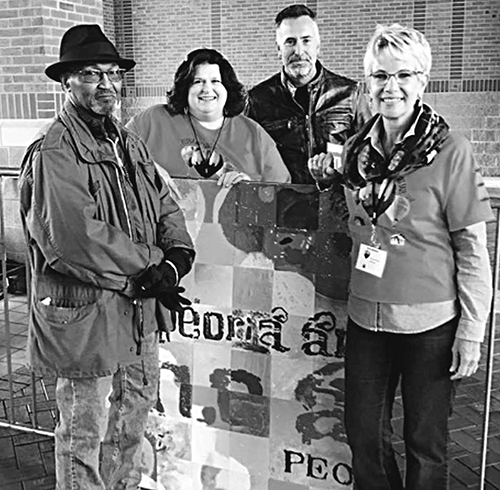 ← When “the best of the best” is arrested
No. 1 in nation for “Draconian,” mandatory drug sentencing →