END_OF_DOCUMENT_TOKEN_TO_BE_REPLACED

My salutations to the guru who opens the eyes of the one who is blind due to the darkness of ignorance with an ointment of knowledge.

The first full week of May is celebrated as Teachers Appreciation week in the U.S.A. I fondly remember teachers’ day in my school in India when the graduating 10th grade students took on the role of teachers for a day and taught lessons. As I grew older, the impact of the teacher became more and more evident to me. Not only we learned from teacher the subject content, but also learned how to learn. They taught me how to think and at their best, they taught me how to differentiate good from bad masquerading as good.

The word Guru is formed from root words Gu- darkness and Ru-dispeller of. In Hindu tradition, a Guru is placed in an exalted position. Any Hindu who has achieved prominence in a field, will proudly proclaim their educational lineage. This is especially true among classically trained musicians and dancers, who will place a photograph of their teacher in front of them during a recital. Children are told many inspirational stories of great teachers and their students. Often repeated is a story of the King Shivaji who offered his kingdom as the honorarium to his Guru Saint Ramdas. The Guru in turn asked the King to rule in his name, thereby setting a standard for the behavior of the ruler and the principles for his administration. In modern times our school teachers embody these attributes. 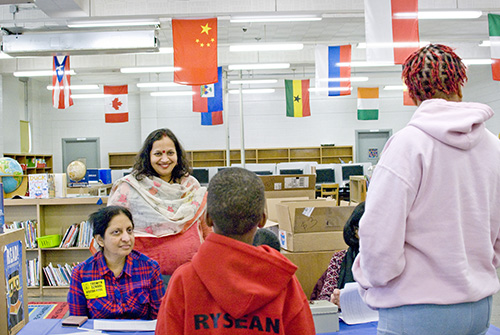 Mugdha Pattekar and other volunteers from the Hindu Temple of Central Illinois staff a special book fair at Trewyn School. (PHOTO BY CLARE HOWARD)

I can vividly remember the times I have glanced into classrooms at the school where we conduct a reading program. The patience and dedication with which the teacher interacted with students especially some with behavior difficulties was superhuman. Even gifted students can be exacting at times. But, day after day, year after year, decade after decade, the teacher turns out men and women who will shape the future of mankind. These special beings deserve more than a thank you card. In the U.S.A., Hindu Swayamsevak Sangh, an organization to which I belong, annually conducts Guru Vandana Program. Last year, 70 chapters invited teachers to a ceremony where they were felicitated in a traditional Hindu ritual with garlands, offerings and obeisance.

There are thousands of ancient manuscripts in Hindu literature and philosophy where texts are attributed to a name but are dated over hundreds of years. This is because each subsequent writer wrote under the name of his teacher, who had himself written under the name of his own teacher. Thus, the first teacher’s name carried on for centuries. Just imagine this in today’s world of copyright and patents.

The first teacher of a child is the mother. This education begins in the uterus prior to exposure to the outside confusing, cacophonic world. This stresses the responsibility of the expectant mother and the people in her vicinity to maintain the ambience where good thoughts and acts prevail. Keeping such a pristine environment is difficult but attempt should be made in that direction.

The relationship between student and teacher is bidirectional. Given the god-like status of the teacher, it behooves them to maintain their behavior to that standard, not just in the school environment but also at home, on weekends and on vacation. A student should never see the teacher in a less than optimal situation. I understand that some will say, “I did not sign up for this tall order. Just give me my salary, and I will educate your children.” That’s OK. But for the rest, I bow my head to you. May you complete your evolution from teacher to Guru.

Dr. Pattekar is a radiologist. He serves as National Director of Service Activities for Hindu Swayamsevak Sangh, USA. He also serves on the Board of Volunteers of Hindu Temple of Central IL, Peoria.