END_OF_DOCUMENT_TOKEN_TO_BE_REPLACED

As May turns to June, bird migration in Illinois winds down and most resident species have taken up housekeeping. They have established nesting territories, and started raising young. During this time, they sing less often and even the most strident seed-eaters will be spending the bulk of their time searching for insects. These protein packed foods are crucial for raising young.

This spring’s migration was an interesting one. The fact that winter held on for so long kind of compressed our spring. Birders live for the first couple of weeks of May when we have the maximum amount of species pushing through Illinois. Many will stay, some will only be here for a brief time before they push further north. During this time, citizen scientists head out to the field in Illinois to conduct the Spring Bird Census. In Peoria County this took place on May 4 this year. Birders spotted 136 species, which was lower than usual. With spring being “late” this year, there were many species that usually nest here that hadn’t shown up yet in numbers. Dickcissels, Bobolinks, Eastern Wood-Pewees and many other nesting species were quite rare during the count this year. Birds that eat flying insects were also late this year. Some of my favorite late arrivals are those members of a family of birds with the unglamorous and misleading name “Goatsuckers.”

There are two species of goatsuckers that can be found in Peoria County. Most widespread is the Common Nighthawk. Its cousin, the Eastern Whip-poor-will is less common and much more elusive. But why are they called “goatsuckers” to begin with? Apparently, it all goes back to a 2,000-year old superstition that these nocturnal birds with very small beaks but wide, gaping mouths sustained themselves by milking goats at night. No one really knows how this story got started, but the unglamorous family name has stuck.

Nighthawks are common in the evening sky over cityscapes and rural areas. They begin to fly right around dusk. They are a medium-sized bird with long slender wings that can span over 20 inches. These wings have a distinctive white blaze marking about two-thirds of the way out to the tip of their wings. In areas rich with insects, they can be seen flying in flocks, wheeling through the air together. They also have a distinctive nasal “peent” call when flying. During courtship, the males will dive from the air toward females and pull up at the last second. When pulling up from the dive, they flex their wings making air rush through their primary feathers. This creates what sounds like a large rubber-band being strummed. This booming call and their nasal “peent” are a true sound of warm June evenings in the Midwest.

Another night-call familiar to some is the loud call of the Eastern Whip-poor-will. He loudly says his name over and over to the night air. Whip-poor-wills are not as common as they once used to be. They are ground-nesters, who have a love of openings in the woodlands for their preferred nesting site. These types of habitats are increasingly rare. The Common Nighthawk has learned to adapt and has found flat-roofs, covered with gravel, to be a suitable nesting site, hence they have found an urban refuge. Both the Whip-poor-will and the Common Nighthawk spend their daytime hours sitting camouflaged, often in plain sight. Their mottled color patterns allow them to blend in to either the ground or a branch of a tree.

Warm evenings of summer are the perfect time to relax and cool off on the porch. The sound of Common Nighthawks are sure to be there to greet you. If you are particularly lucky, and live in a rural, wooded setting, you could hear the calls of the Eastern Whip-poor-will. Take some time to seek out these sounds of summer. 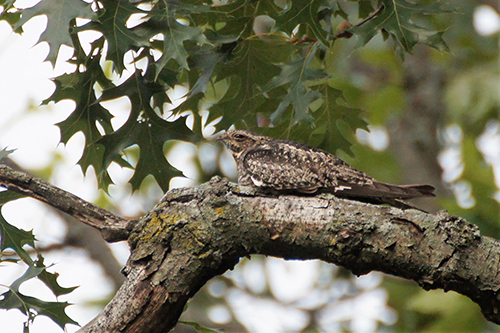 A Common Nighthawk sits on a branch at Tawny Oaks Field Station. Nighthawks eat flying insects and are members of a family of birds with the misleading name “Goatsuckers.” Another member of that family is the Whip-poor-will, a species that is less commonly spotted in central Illinois. (PHOTO BY MIKE INGRAM)