END_OF_DOCUMENT_TOKEN_TO_BE_REPLACED

Thankfully, most Democratic candidates for the presidency are calling for the abolition of the Hyde Amendment. The amendment was passed in 1976 shortly after Roe v. Wade established the legal right to abortion. Hyde restricts federal funds from being used for most abortions, but the reality is it restricts funds for low-income women. It is transparently discriminatory.

Wealthy women pay for their own abortions and travel anywhere to obtain the procedure. Low-income women on Medicaid have to secure help from family, friends and charities to fund their abortions because Hyde prevents federal Medicaid dollars from being used for abortion with the alleged exceptions of pregnancies that endanger the woman’s life or because the pregnancy is the result of rape or incest. Those exceptions are nothing more than political cover and political jargon. The reality is there are virtually no exceptions. Women who are pregnant by rape or incest still resort to begging for financial help either because they didn’t file a police report or their complaints were summarily dismissed or the time to work through the bureaucracy pushed the pregnancy into a later trimester.

More than a dozen states, including Illinois, recognize the discriminatory nature of Hyde and use state funds to provide coverage. It’s time to stop using religion as justification for public health policy. Hyde is political rhetoric, not sound science-based public health policy. 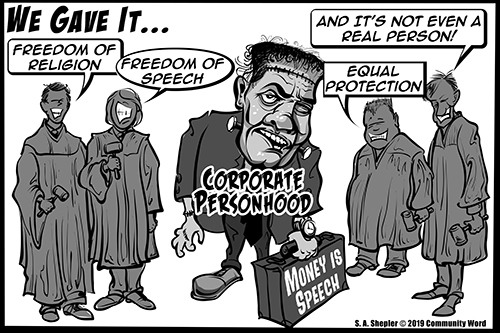 Move to Amend calls for end of corporate tyranny

It is not just Citizens United that has undermined democracy in this country but centuries of legal court decisions that have cumulatively awarded corporations with personhood rights. The most recent was the 2014 Hobby Lobby decision that gave for-profit corporations religious rights. In this case, the legal right to prevent insurance coverage for female employees for contraception.

The rights guaranteed in the Constitution are for real people, not corporations.

Move to Amend is a coalition of hundreds of organizations seeking to educate the public about the erosion of social and economic justice at the hands of corporations that have used the courts to win decisions seeking Constitutionally protected rights.

Greg Coleridge, national outreach director with Move to Amend, spoke in Peoria recently. He said he is both optimistic and epocalyptic.

“We have never had an authentic democracy. The courts have continued to give corporations power,” he said, noting that from the start, the country overtly recognized only white, male property owners. That discrimination continues today but it is not always overt. It is subtle and manipulative, but with the same results. The deck is stacked against everyone who is not white, male and wealthy.

Showing an extensive time line, Coleridge traced court cases back more than 200 years giving corporate personhood rights ranging from freedom of religion to free speech rights, protection against search and seizure, right to life, liberty and pursuit of happiness, equal protection under the law and substantive due process.

In one case, the dairy industry successfully won a decision that it could not be forced to label dairy products containing bovine growth hormone because such a label would have violated its free speech rights which in this case is also the right not to speak.

It was then presidential candidate Mitt Romney who famously said “corporations are people too.”

Move to Amend advocates for adoption of a 28th amendment to the Constitution that clearly states artificial entities like corporations do not have Constitutional rights and it states that money is not free speech.

Coleridge said he worked for decades with the American Friends Service Committee, a peace and justice organization. He became increasingly discouraged by the persistence in injustice and inequality. That drew him to the Move to Amend organization calling for a fundamental change in the U.S. Constitution.

“The momentum is growing. We are at a tipping point,” he said.

It is a compelling and convincing realization. Corporations are essentially amoral meaning they are not compelled by ethics, justice and morality. They are driven by the fiduciary interests of their shareholders. When such amoral entities have rights equal to or greater than the rights of people, we clearly see an epocalyptic world.

For more information on Move to Amend go to www.MoveToAmend.org. Coleridge spoke at the Labor Temple hosted by Sharon Williams, business manager and editor of the Labor Paper.