END_OF_DOCUMENT_TOKEN_TO_BE_REPLACED

The warm days of August harken the arrival of many prairie flowers and insects. The ever-majestic Monarch butterfly is a common visitor to the August prairie. An observant visitor will also see the striped caterpillars munching hungrily on several species of milkweed at this time of year. Monarchs are the perfect poster-child for the Illinois prairie. They are colorful, have an amazing life history complete with a unique migratory habit, and like their prairie habitat, they are becoming increasingly rare.

The Monarch has become somewhat of a “gateway insect” for gardeners. Many people who have been raising flowers for years have turned their eye towards the Monarch. By planting the right native wildflowers (milkweeds) they have learned how to decorate their gardens with colorful, fluttering wings. It’s satisfying to know that we can garden for a purpose greater than the visual benefit of the bloom. 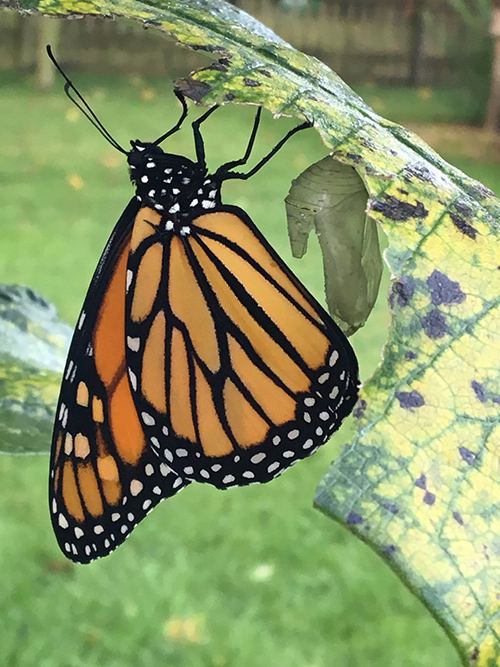 A Monarch freshly emerged from its chrysalis. (PHOTO BY MIKE MILLER)

The fact that the Monarch’s lifecycle centers around the milkweed plant has also enticed folks to hand raise monarchs. The idea being that if one collects the eggs on milkweed plants and protects them from predation, they will have a much higher survival rate, and this is true. The Monarch Joint Venture, a partnership of federal, state and non-government organizations, estimates that only about 10 percent of monarch eggs will make it to adult butterflies. Other estimates are quite lower. Some Monarch enthusiasts that hand raise from eggs to adult have boosted survival rate to near 100 percent if they are very meticulous. If you follow social media such as Facebook, there are several online groups that discuss and offer support and guidance to those who hand raise Monarchs and other species of butterflies.

Lately, there has been a lot of debate within the scientific community whether hand raising is beneficial or detrimental to the species. Some theorize that the process side-steps the ability of nature to weed-out the weaklings, and increases the chances that inferior genetics will be perpetuated in the species. Others fear that the confines of hand rearing habitats can lead to the spread of disease or development of new virus or other bacteria that can be transported to wild populations. Still others feel that it isn’t right to artificially increase a species population in an area that might not be able to support that larger population in the wild once the adult butterflies are released. All of these are valid concerns and deserve exploration, but unfortunately, in all of the discussion, one thing has happened. Those dedicated individuals who have actively been raising these butterflies have felt marginalized by the scientific community that they feel should be supporting their conservation efforts.

Perhaps it’s time for both sides of this debate to take a step back and understand that we all have one goal in common –– to keep the Monarch butterfly from becoming extinct. The Monarch enthusiast that has been successful in hand raising from egg, to caterpillar, to chrysalis, to adult Monarch, has become a citizen scientist with a deep understanding of the life-history of the species. The scientific community cannot save the species by research alone. It is going to take “butterfly stewards” in the field to be a part of the recovery of the species. Science needs armies of advocates to make sure funding is provided, legislators are held accountable and there is political will for making the tough decisions on how we preserve and protect habitat in an increasingly fragile world. In the process of collective cooperation, we might even find a way to solve some of the other problems we face as a species.