END_OF_DOCUMENT_TOKEN_TO_BE_REPLACED

Founded in 1967, the Kohler Arts Center in Sheboygan, Wis., is one of the most innovative and uncoventionally curated museums in the country. Many modestly sized museums such as the Kohler that have a contemporary art agenda and/or research mission tend to be monotonous clones of larger museums, slumbering in a routine of aesthetic stagnation. The Kohler, however, is devoted to the production of visionary artists. Its motivation is to consistently present folk art and craft not only as an addendum to more progressive contemporary art but as part of the discourse on what defines contemporary art – one that includes the vernacular, its narratives and artist’s environments. 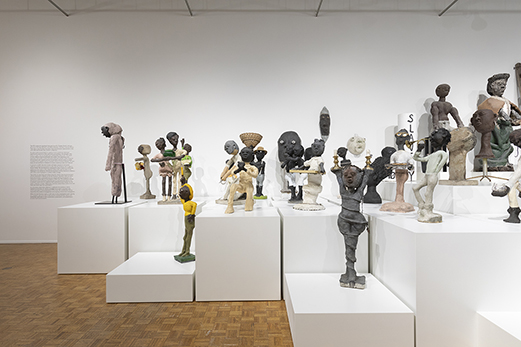 The story of the Kohler is romantic actually in its approach to culture exemplified by its commitment to its community and under-represented artists. For almost its entire history, it’s been run by Ruth De Young Kohler, granddaughter of the ceramic industrialist John Michael Kohler. She’s taken the Center from a small craft-focused project in the late ’60s to today’s complex research, production and collaboration organization with a theme that to some may seem niche. In truth, however, the center is a riposte to most of the museum world where status and power turn art into elite exercises in corporate amusement.

The thrust of Kohler’s subject actually is connected to a principle of the ’20s avant-garde, that being the return of advanced, even revolutionary culture to the people –– something lost in neo-classicism and then conveniently forgotten by mid 20th century. The critical position of early modern art manifested itself in artworks about elevating ordinary life, labor and domesticity, aiming at a democratization of creative production. The communal modernist coin had a flipside which addressed the individual as primary subject, where expressionism, so-called primitivism, folk art and other radically independent narratives came to be located, often in seclusion. Such work could also be seen as a reaction to industrialization, alienation and economic oppression as was abstract art.

Each show currently on view is an extraordinary balance of vernacular aesthetics which also seems to share DNA with Fluxus, DIY and Dada. On one end of the spectrum are the figures of Dr. Charles Smith, sculptor, preacher and activist, whose painted concrete populace is dedicated to African American history and the legacy of slavery. On the other, we have a material intervention into the former home of the Kohler founder by installation artist Serra Victoria Fels, that injects caprice and illusion to the museum’s preserved wing. Her architectural incursions and trimmings present the space and by association the history, as mutable and personal.

Earlier exhibitions, “Sublime Spaces & Visionary Worlds” and “THE ROAD LESS TRAVELLED,” included remarkable outlier artists Eugene Von Bruenchenhein, Stella Waitzkin, Dr. Charles Smith and Mary Nohl. Their transformed environments, which were astonishingly imaginative, mostly rural parts of their oeuvres, were pivotal to the Kohler. In the summer of 2020, the center will open “The Art Preserve” and become the world’s first museum devoted to artist-built environments. It will house 34 visionary artists with thousands of individual pieces and display art as far back as the 19th century. Sam Gappmayer, formerly of the Peoria Riverfront Museum, and only the second Kohler director in the last 40 years, is presiding with Ms. Kohler over the expansion. What distinguishes John Michael Kohler’s torchbearers is that they lead an institution that has an uncommon stake in culture. Their commitment provides proportion to more reclusive artists (and maybe more reclusive audiences). The artwork, while intermittently confounding and sensational, is critical on its own terms –– hanging splendidly by a thread from official art history.