END_OF_DOCUMENT_TOKEN_TO_BE_REPLACED

Herbariums are repositories for plant specimens that botanists have collected, dried, pressed and preserved on archival paper. They contain information on the location where the specimens were collected, the date, the habitat present and any other details the collector thinks might be important. During the early 1900s, many people collected plants as a hobby, while others collected as part of their jobs at universities. Many of the private collections from the earliest 20th century have eventually wound up in larger herbariums. One such collection was a vast herbarium of over 15,000 specimens collected by Virginius Chase from Peoria. A prolific collector and naturalist, he was active from the late 1800s through the early 1960s. Properly mounted and cared for, herbarium specimens can last for hundreds of years. Herbariums are time capsules, and in an era of rapid development, destruction of habitat and effects of a changing climate, they are crucial for our understanding of ecology. They are also treasure-troves full of history and mystery.

I recently had just such a mystery presented to me. Bill McClain is the former Stewardship Program Manager from the Illinois Department of Natural Resources. After retirement, he has kept himself busy as a commissioner for the Illinois Nature Preserves Commission and by conducting several ecological research projects throughout the state. He happened upon a specimen of a plant called Sensitive Briar (Mimosa nuttallii) that was collected by Virginius Chase in June of 1919 in what is now West Peoria at “Horseshoe Bottoms Overlook.” Bill wanted to know if I was familiar with this plant or had ever seen it growing in Peoria County. I never have. It is a striking plant with feathery mimosa leaves and a bright pinkish flower accented by yellow stamens. It has other colorful common names such as “Cat’s Paw” and “Devil’s Shoestrings.” All of these names add to the mystery of the plant. 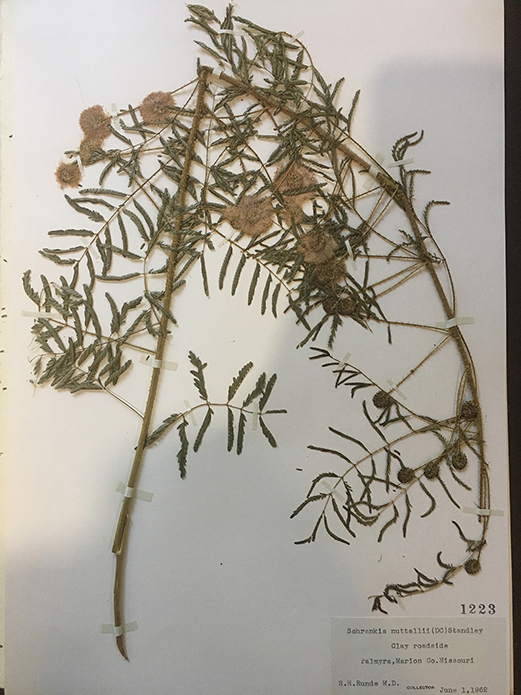 Sensitive briar (Mimosa nuttallii) from Forest Park Nature Center herbarium. Once found in Illinois, it has become extremely rare in the state. (PHOTO BY MIKE MILLER)

A search of the distribution of this plant finds it only being documented growing in five counties in Illinois. There are several old herbarium specimens for Peoria County. Botanist F.E. McDonald collected it here in 1900 and 1901. At that time, he thought that it might have been something that was translocated from the western plains where it is more common. Chase collected it from the same site in June of 1919, from an undisturbed prairie. Chase was pretty insistent that the plant was native to Illinois since it was growing in virgin prairie, and all of the other sites where it was growing in the state were similar high-quality habitats. Since Chase and McDonald were both local botanists, I wonder if they ever had a face-to face discussion about their disagreement. McDonald died in 1920, shortly after Chase collected his specimen of the plant.

Bill was re-visiting these old sites to see how the state’s populations of this plant have fared in the 100 years since it was last collected here. On a July day, we visited existing natural areas with no results. Either the plant has disappeared from the remaining prairies, or the remaining prairie remnants where it was collected in 1919 are not the same remnants that exist today. Bill’s research of the populations has found that there is likely only one remaining population (composed of 11 individual plants) left in the state of Illinois.

In the meantime, I’m sure that local ecologists and prairie enthusiasts will be looking at every prairie remnant with a new focus. Could it be that there are still a few surviving plants that have gone undiscovered? The search goes on and the mystery renews.