END_OF_DOCUMENT_TOKEN_TO_BE_REPLACED

Jonathan Higgins, artist and master printmaker and his wife printmaker Sarah Smelser have owned Manneken Press in Bloomington, Illinois, for 17 years. The press was founded in 2000 in Morgantown, W.Va., as an independent press where Sarah landed her first teaching position. West Virginia University has a noteworthy print tradition beginning with Will Peterson, a printer/poet and confederate of Jack Kerouac. Peterson began the program at WVU in the late ’60s. Smelser led the area for three years before coming to Illinois State.

Higgins developed his discipline and sensibilities at Vinalhaven Press in Maine, the Rutgers Center for Innovative Print and Paper in New Jersey, and at his co-owned Galamander Press in New York City. Consequently, he was well prepared to establish Manneken as an autonomous entity in Morgantown. Its methodical, coherent aesthetic and comfortable digs in a spacious downtown loft made it a print destination, nestled in the foothills of the Alleghenies.

The identity of printmaking in the U.S. is collaborative and geographic. The West was instrumental in defining the nature of the independent master printer through institutions like Tamarind at the University of New Mexico and Crown Point Press in San Francisco. These sites are touchstones for Higgins having grown up in Berkeley, Calif. Land grant universities in Iowa, Wisconsin, Indiana, Nebraska, etc., form the core of its academic tradition.

Jonathan Higgins’ discerning eye is evident in his own remarkably meditative and labor-intensive works on paper. They depict rich, dense graphic records – no narrative, no decoration, no illusions – all picture, and they guide his collaboration with artists in intaglio, relief, lithography and monotype. Supporting artwork that asserts the foundational acts of two-dimensional investigation over narrative, he publishes work that’s unequivocally stirring, intelligent, sustainable and suited to the medium. His stable spans the United States but to a person is formally experimental, utterly lucid with regard to space and color, and pursuant of memorable, elemental compositions.

Recently, Manneken added Chicagoans Richard Hull and Judy Ledgerwood, long recognized Chicago artists that extend the boundaries of Manneken’s vivid post-formalist personality. Hull in particular establishes a critical pivot point with one toe in the hallucinogenic wing of Chicago Imagism and the other in its love of the vernacular. Hull’s billowing line generates volatile microclimates atop the shoulders of shadowy anonymous figures, but unfettered confidence in his drawing process releases the image from subject overload. Traditional meaning is pushed to the margins. A similar guilelessness is a point of order, paradoxically, for Manneken’s free-form abstractionists Catherine Howe and Jill Moser. Intuition and risk are also traits of Higgins more analytical artists Rupert Deese or Ted Kincaid, longtime purveyors of a cooler pictorialism.

Deceptively simple pattern and conceptual transparency, generally guide Jonathan Higgins collaborations. His projects’ blend of elemental subjects and concrete aesthetics are not the detached and ambiguous narrative de jour of so much contemporary art. Printmaking is an artworld frontrunner in exalting craft over spectacle, digitalism and remote sensing. With Manneken you’ll find the clearest evidence of the practice – artists’ deliberative investigation of materials and technology, self-reflective, intelligent – all picture. 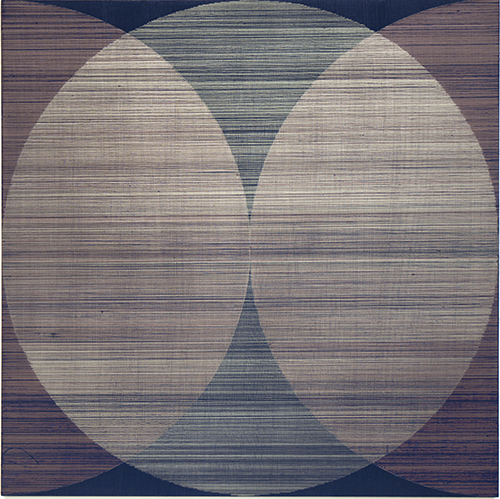