END_OF_DOCUMENT_TOKEN_TO_BE_REPLACED

The catalog essays that support the exhibition “What Came After: Figurative Painting in Chicago 1978 – 1998” at the Elmhurst Art Museum, question whether the term “Imagism” is fitting for art predominately recognized as Chicago-born. They also question whether Imagism was a school (in the sense that the New York School was). After all, the “Chicago School” moniker rightly belongs to the city’s architectural history.

Many feel Imagism sells the work short. It’s complicated. It was designed in part to contrast New York’s appetite for abstraction, i.e. non- or anti-imagism, as well as its status as the most elite American aesthetic, an inheritor of European modernism. But the core difference between Chicago Imagism and New York abstraction isn’t just images or even figures. The New York School and its heirs had plenty of images, stretches of billowing form and seething pigment that was nothing if not pictorial. What New York painting had less of by the 1960s was narrative. Whereas Chicago loaded up on content, free-associating visual texts of gratuitous erotica, neurotica and fetishism. A boisterous alternative to progressive, coastal art was set at the table of Chicago collectors who feasted on something scandalously anti-intellectual, primitivist and pleasurable.

The first generation, Wirsum, Nilsson, Falconer, Green, Nutt and Rocca, continues to tilt most of the popular imagination about Chicago despite the quality of narrative painters that followed. Phyllis Bramson, who fits right between the Imagists and their successors, curated this show to right that ship. The city’s modern and contemporary art discourse has been routinely defined by artists who are used to doing the heavy lifting. The art establishment follows but is generally too polite to disturb the status quo which bows to New York tastes. Whether you came in on the narrative or abstract side of Chicago’s painting history, it would be messy and strenuous to claim that the city had official alternatives to coastal art production. So Phyllis Bramson steps up, as she has before, with an impressive project and a modest exhibition title that simultaneously raises the question – what comes next?

Inland art is obsessed with objects. Paintings such as the ones in Elmhurst seem as three-dimensional as they are two, as much ornamental and structural as pictorial. They’re often acknowledged for merging of materiality and imagination, form and text having arrived on a decidedly less continental path than that of the Eastern seaboard. The Elmhurst show re-introduces post-Imagist narration in Chicago art and makes a persuasive case for further illumination and examination.

“Came After” is not the feral dreams of mostly male artists as was Imagism. Radical rendering of space and figures notwithstanding, the subjects are more internalized, symbolic, meditative, even cryptic. Where the Imagists dismissed modern art tropes with subaltern ritual, the following generation of artists hadn’t such collective ambitions. Many fit as much with the broader post-modern turn of artists and writers who were sorting issues of identity and authorship. Consequently, this show isn’t formally cohesive and makes “What Came After,” with just varying degrees of localism, harder to unravel.

Nonetheless, the exhibition is a skillful collection of a significant strain of Chicago painting completed at the conclusion of the 20th Century. Bramson, Hollis Sigler, Michiko Itatani, Margaret Wharton and Richard Hull are standouts, represented with noteworthy examples of a critical period in their careers. What links them isn’t what one expects from the legacy of Imagism. It’s their remarkably independent exploitation of visual language, aggressive technical investigation, self-reflection and labor. The power and charisma of their work is paradoxically the result of not having enough critics and curators to sufficiently theorize, domesticate and influence our impressions of them. Their last nurturing essayist was James Yood who died at the peak of his career in 2018 as Bramson began designing “What Came After” and the show is properly dedicated to him.

“What Came After: Figurative Painting in Chicago 1978 – 1998” continues through Jan. 12 at the Elmhurst Art Museum. 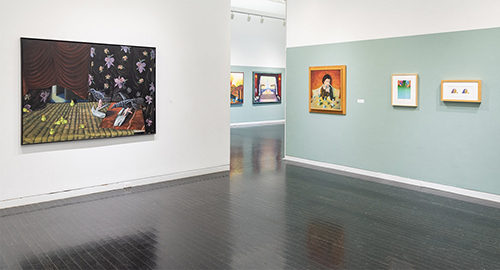