END_OF_DOCUMENT_TOKEN_TO_BE_REPLACED

In 2004, climate scientists predicted “more intense, more frequent and longer lasting heat waves” this century. In 2008, the 2nd National Climate Assessment projected heat waves in the Midwest every summer by midcentury. Last year, the Union of Concerned Scientists’ Killer Heat in the United States estimated heat index scores for Central Illinois would exceed 105°F for 18 to 26 days by the late-2030s. Heat index scores combine air temperature with humidity – important, because Peoria’s “wet heat” has the potential to become a mass killer.

Ask Chicago. In 1995, authorities were unprepared and lost over 700 people during a four-day, “orange-zone” heat wave. An orange-zone, or dangerous heat wave, has heat index scores in the 105°F to 124°F range. As this decade turns to the next, orange zone heat waves will become increasingly likely, longer and possibly contain in the mix some extremely dangerous, red-zone days (scores beyond 121-124°F).

Also vulnerable are those relegated to death-trap housing, i.e., accommodations that lack shade trees, are poorly insulated and ventilated, and whose occupants lack air conditioners or can’t afford to run them. In the 1995 Chicago heat wave – Paris in 2003 – first responders were body bagging inhabitants in death-trap rooms that registered up to 120°F.

What helped create death-trap housing? Ghettos –– that’s the right word because, like the Warsaw ghetto in World War II, the Peoria “ghetto” was manufactured through planned government action: first by the U.S. government redlining African American communities and next by state and local governments through residential zoning and other measures to severely restrict housing choices and home ownership for Blacks.

Richard Rothstein, in “The Color of Law,” details how the federal government actively worked to increase housing segregation where it already existed and to create it where it did not.

We therefore face this prospect: a week-long red- or near red-zone heat wave intersecting with Peoria’s once redlined African American neighborhoods. In short, a Heat Wave in Red & Black. Deaths will be scattered across Peoria City and County, but the death rates will be highest in low-income areas of the city.

Peoria County, covered under the Tri County Hazard Mitigation Plan, is not concerned about heat waves. Table 1 reveals why. To receive a high rank, and thus attention, a hazard must have (1) a high probability of occurring and (2) entail lots of property damage. Thus, flooding and tornados top the list, but heat waves, ranked sixth, are toward the bottom.

The reasons are telling. First, like neutron bombs, heat waves leave buildings intact; they kill the people inside. Second, probabilities derived from historical records don’t fit heat waves which are driven by ongoing buildups of carbon in the atmosphere. Climate science probabilities for heat waves would match floods or tornados. Instead, Peoria chooses to drive into the future with its eyes affixed on its rearview mirror. Peoria’s hazard rank system valorizes property and discounts lives, Black lives in particular.

In the next essay, I will outline quick, low-cost fixes to reduce loss of life during a big heat wave, fixes which are not considered in Tri County’s draft 2020 plan. 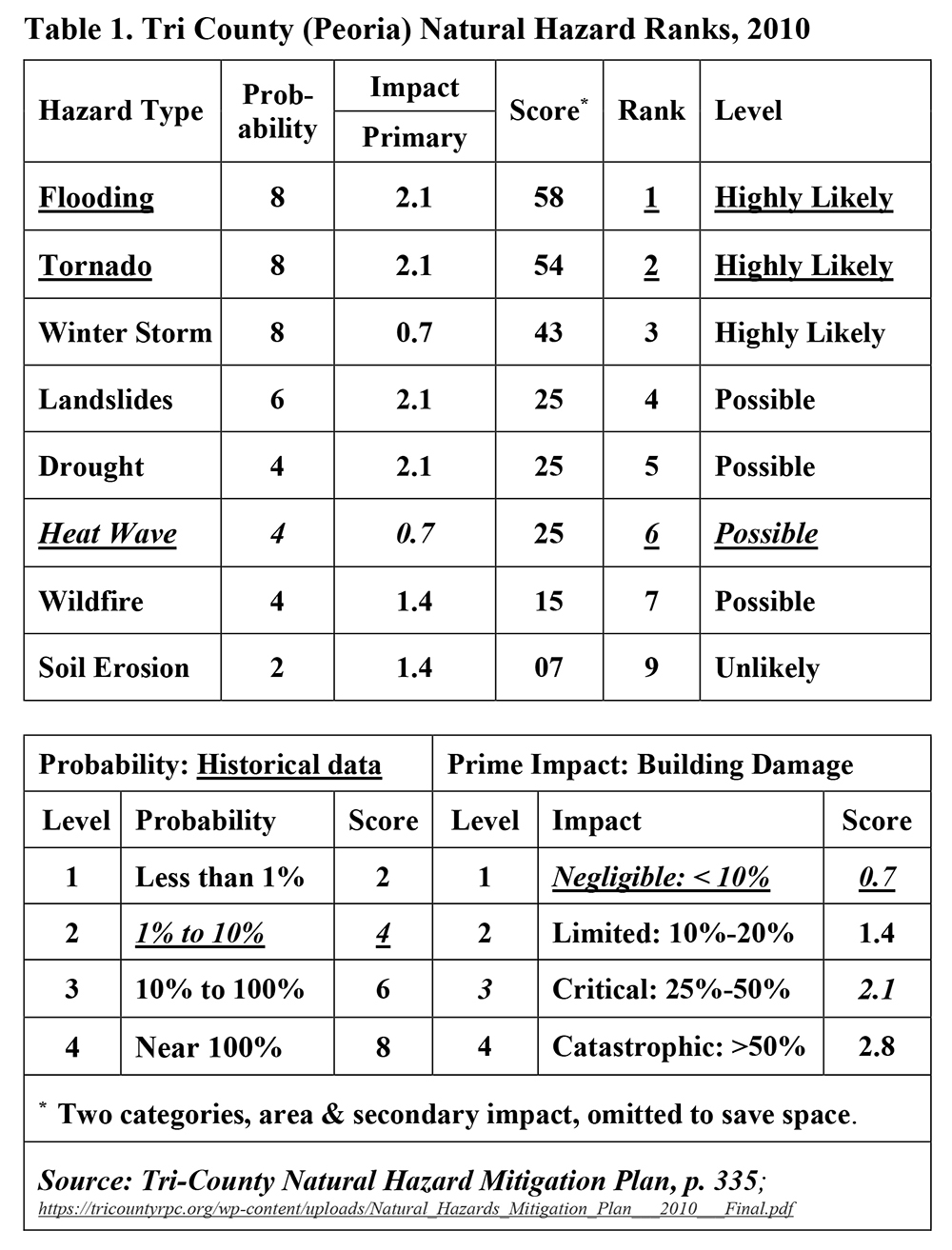