END_OF_DOCUMENT_TOKEN_TO_BE_REPLACED

March is one of those months that many would like to bypass. It’s not the depth of winter anymore, and spring seems like it will never arrive. From my perspective, March is the perfect month to revel in the last moments of nature’s quiet slumber. One of the places I like to visit this time of year are sunny hill prairies on a warm March day. A hill prairie is a small opening, usually surrounded by woodlands, that is dominated by prairie vegetation. They usually occur on south or south-west facing slopes. They are ancient survivors that have been part of the landscape since glaciers retreated over 10,000 years ago.

At the end of the last ice age, the landscape of Illinois was extremely altered by the effects of glaciation. One of the first habitats that became established on this newly opened landscape was tallgrass prairie. Over the subsequent millennia, woodlands also became established in waterways that formed the “hills and hollows” of places like Forest Park and our other conservation areas. On some of these steep slopes with a direct sun aspect, it was so dry that trees had a hard time becoming established. It is here that hill prairies persisted and didn’t develop into woodlands. Due to their dryness, and adequate prairie vegetation, they were also prone to periodic fires, which also kept the trees at bay. 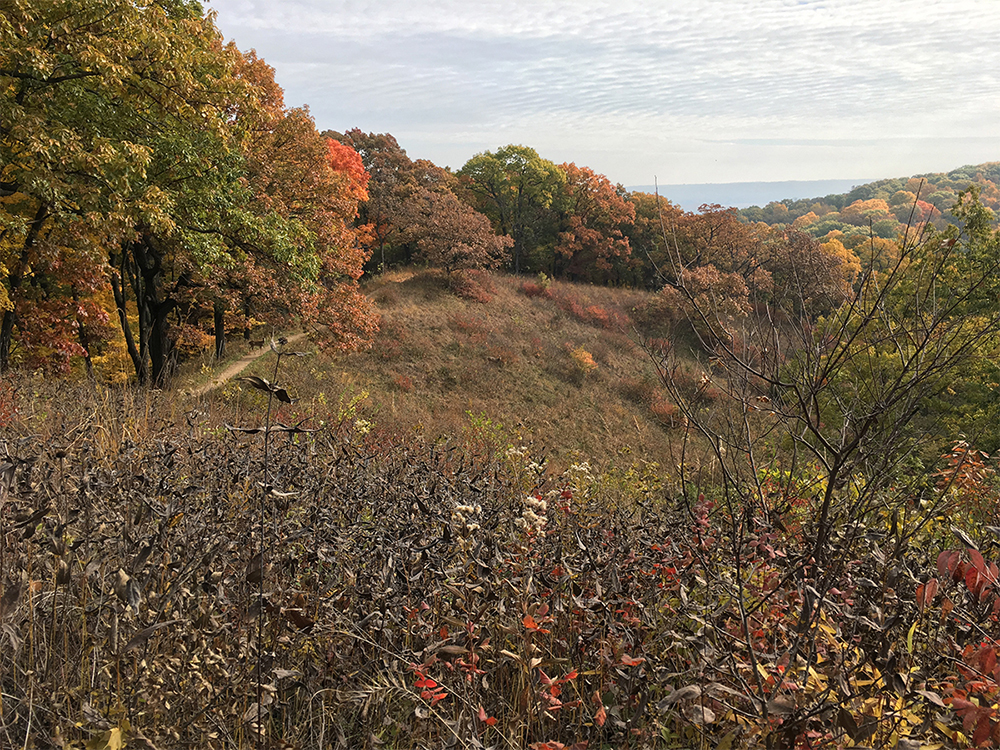 Since hill prairies tend to be adjacent to woodland habitats, they are heavily influenced by them. Prior to European Settlement of the Midwest, these hill prairies were also influenced by the tallgrass prairie habitats that once dominated the majority of the landscape. Since the mid 1800s, 99.97% of the tallgrass prairie has been converted to agriculture. Fire played a crucial role keeping prairies from turning into woodlands in Illinois. Prairie fires sweeping through the vast expanses of grasslands were the origin of the wildfires that also burned hill prairies. Once the agricultural landscape overtook most of Illinois, the frequency of fires in hill prairies declined. This sets the stage for the adjacent tree growth to slowly overtake hill prairies. In Illinois, we have already lost over 60% of the hill prairie habitats that were in existence in 1950. This 60% loss is not because of destruction; it is due to the forest overtaking the prairies due to lack of fire. Land managers use prescribed fire as a tool to reintroduce the essential wildfire frequency to these fire-dependent habitats.

While hill prairies have persisted for thousands of years, we are just beginning to understand their complex ecology. Because of the close proximity to woodlands, there are some unique prairie plants that can survive here. Large-flowered False Foxglove (Aureolaria grandiflora) has a unique relationship with trees like Chinquapin Oak. This wildflower will actually attach its root system to the roots of the Chinquapin Oak. This allows the tree and wildflower to share nutrients and water with each other. This is just one example of numerous symbiotic relationships that we are discovering. The fact that these prairies are such an ancient landscape has allowed them to evolve a unique and specialized constellation of species that does not exist elsewhere.

In Illinois, hill prairies are found within glacial topography where glacial end moraines have southern slopes exposed to direct sun. In Central Illinois, the glacial moraines tend to run north and south. Creeks have cut through these moraines causing erosion that both exposes the glacial till and creates southerly exposures. This unique set of circumstances has created what are known as Glacial Drift Hill Prairies to be formed along the Illinois River valley. There are several types of hill prairies, but each individual hill prairie has a unique set of geologic influences that have caused them to form and persist. This makes hill prairies some of the most diverse types of habitats on Earth. No two are exactly alike since each of their geologic origins are so unique.

Hill prairies are beautiful and special places. They have an ancient history formed by geology, climate and the passage of time. They are also in peril. They have lost their tie to the vast prairies that once dominated the landscape, due to our agricultural activity. Without active stewardship by people, they will soon disappear forever.