END_OF_DOCUMENT_TOKEN_TO_BE_REPLACED

It’s common to praise first responders, especially in the pandemic. What of “last responders”?

Months ago, the 46-year-old Princeville native had been aware of the virus detected in China, Seattle and cruise ships from reading the news and Medscape, a health-professional internet resource. But when the Peoria City/County Health Department assembled groups to start coordinating a local response, Harwood saw a flow chart outlining participants, including his office.

Since his 2016 election, Harwood had been working with county officials on an updated Fatality Management Plan.

“We have a plan in place, the tools, if bodies start piling up,” he says. “It’s a fluid document that is in a metamorphosis stage. And we’ll respond with dignity.”

He owes people that, he says. That’s who he works for.

“I owe respect to the families and everyone who voted for me – the public,” he says. “And, really, the whole region since we get involved with an area from Rock Island County to McLean County because there’s a trauma center here and patients are brought here and some die.”

Before Harwood goes to a scene – where he examines evidence, talks to police and families, and, later, looks at medical records and completes reports – his days start by getting up around 5:30, when he ambles into the kitchen for coffee, and returns to his bedroom.

“I read local news on my phone, plus Medscape and Daily Skimm headlines, look over Facebook and Instagram, and listen to the cat meow and dog rouse, and get our three year old ready for school,” he says. “I’m at the office around 7:30.”

A father of three, Harwood settles into his windowless office in a brick building on the East Bluff. Wearing slightly spiked hair and a knit shirt with a county logo, he occasionally stretches his arms to help chronic shoulder discomfort. On the job, he tries to make others comfortable while maintaining a professional atmosphere.

Historically, elected coroners were often non-medical people, from funeral directors to those with law enforcement backgrounds. Harwood is a long-time Registered Nurse, graduating from Penn State and after earning a nursing diploma from Methodist School of Nursing working in critical care, emergency medicine, flight nursing and other medical roles.

“I approach the job as ‘evidence-based,’” he says. “My investigations are two parts: medical and law enforcement.”

His collaborations include a physician who does autopsies if needed, and police.

“I try to go to motor-vehicle accidents, homicides, suicides,” he says, “to be a second set of eyes there.”

He says he relies on other expertise, such as a pathologist, and stopped doing inquests after a 2007 change in state law gave coroners discretion.

Harwood’s dislikes those panels of six everyday people who hear one side of cases, like grand juries.

“There’s no justice in inquests,” he says, “and outcomes can affect insurance, legal disputes and surviving relatives.

“I value that human connection,” he continues.

His office, which includes four full-time and four part-time employees, investigate, then talk with families – “on the worst day of their lives,” he says.

“We want to be there, to show compassion – like I did as a nurse,” he adds. “There, you’re with a patient and talk with them and show you care. Then you leave and go to the next room and so on. You compartmentalize, but you want to be always in the moment with family.”

As with any public-health professional, Harwood hopes such sensitivity won’t be in demand due to a wave of coronavirus deaths. Empathy and preparation, lacking in some places, makes central Illinois relatively ready should the contagion spread. Compared to other areas, greater Peoria is no hotspot, whether it’s happenstance or vigilance. It hasn’t been spared, but as of mid-May, state data show infection rates (cases per 100,000 people) of 82.7 in Peoria County, 43.9 in Tazewell, and 39.5 in Woodford. Cook County, including Chicago, has a 1,095 infection rate; statewide, Illinois has a 668 infection rate.

“I think the [national] case count may be off,” he says. “On the other hand, some numbers are inflated, and some have been missed, so maybe it’ll all come out in the wash. [But] there’s a difference between ‘he died OF coronavirus’ and ‘he died WITH coronavirus.’”

If Harwood’s called, he’ll answer, as he does for natural causes, overdoses, etc., careful to determine the cause of death and the manner of death.

“Constituents want to see us, and I want to see them,” he says. “I want to be an advocate. I think it’s worth it.” 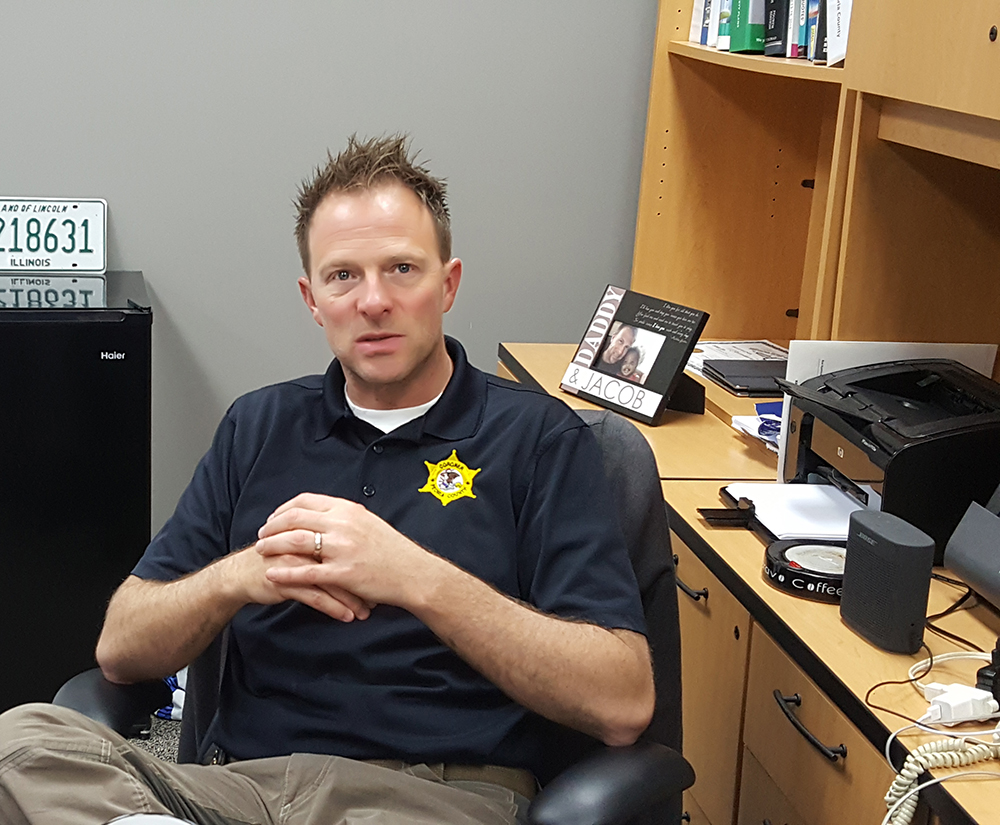