END_OF_DOCUMENT_TOKEN_TO_BE_REPLACED

“The falling away of illusion” is a description that Buzz Spector, artist, writer and longtime colleague of painter Dan Ramirez, uses in discussing perception in the artist’s “Contemplation of the Virgin: var#3.” The essay appears in Ramirez’s “Certainty & Doubt” catalog that accompanied a decades-long survey of his work at the Chazen Museum of Art at the University of Wisconsin, Madison in 2017. Spector’s phrase is particularly striking in that it has philosophical, even scriptural implications regarding originality and tradition in Western culture. Modernism frames illusion by a debate about the function of the image and a rejection of a determinist model of civilization. The reductivist turn after the mid-twentieth century left more room for the artists head than hand, converged on material, and was equivocal about mediation. “Falling away” is provocative considering notions of immanence and transcendence sidelined by the art world for the last 50 years, and appears to be an apt response to classicism as well as to zealous disciplinary critiques in our current stage of post-modernism. The concept of romanticism and spirituality is still vexing for the fundamentally atheistic Western canon.

Ramirez’s painting is thematically varied but formally consistent. He has zeroed in on the design of Gothic architecture, particularly the profuse Tierceron star designs of cathedral vaulting. Their rolling arcs have appeared in numerous compositions over the years apprising his signature isosceles trapezoids. The painter also considers how modern symphonic music comports with abstraction in visual art and searches out correspondences between the kinds of perception they engender. He’s painted melodic texts –– fragments of musical scores that refer to formal instrumentation, sometimes stressing spaces between notes even as he aspires to New World romanticism. Working to replicate the paradoxically somatic memory of something as time-bound as sound he is particularly taken with the French 20th century composer, Olivier Messiaen, who like Ramirez emphasizes meditation, innovation and hybridity. Each connect their work to nature, spirituality and art as a form of knowledge, more than a standard of beauty.

Ramirez’s early interest in Analytic and Continental philosophy helped him to frame issues of language and space critical to his concept of architectonic formal structures. Gradually he translated this research into an intimate conversation with materials and iconic forms. They’re embodied in a meticulous selection of painting substrates, rigorously applied washes of acrylic paint, soaring compositional arcs, textbook edges, and understated color often presented in his familiarly truncated canvases. Newer work is clearly more puzzling and his wheelhouse now includes digital prints where he exploits the medium’s denatured surface, synthetic prism and ambiguous illumination. 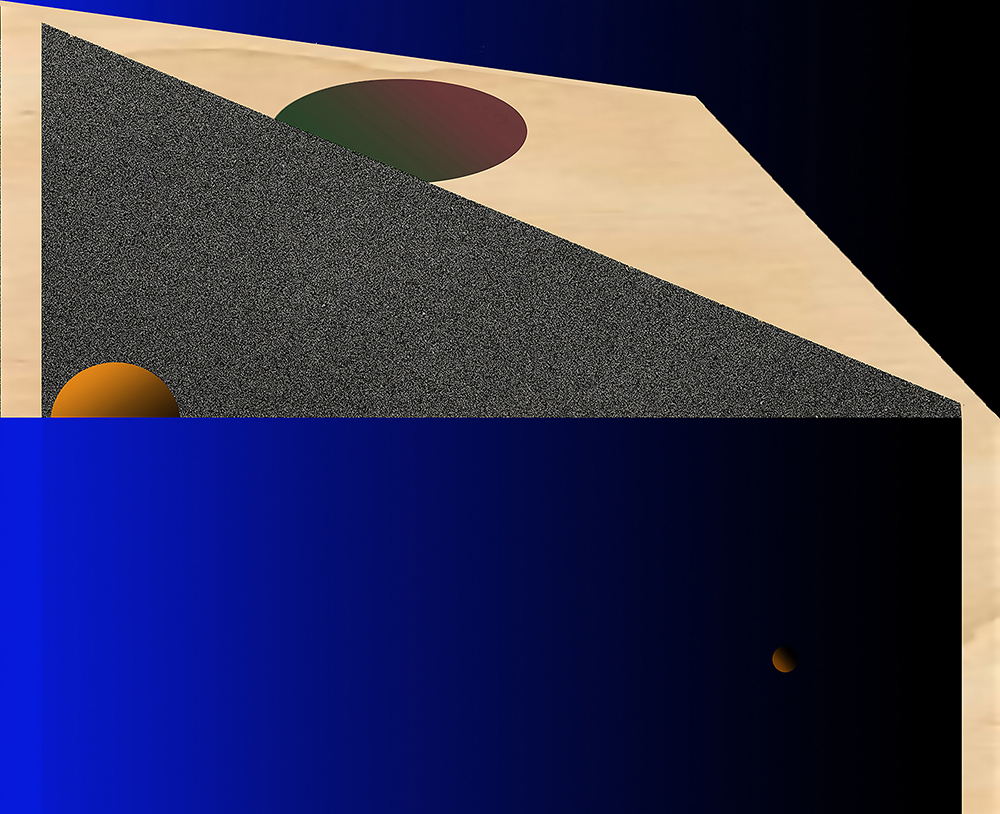 The space of “Moonplay with Cezanne” is designed more like a projection, or animation cell, than a painting and is in fact a digital print. Its horizontal format is broken with a 24-degree incline that compresses the picture and subdues the ultramarine cosmos above and below it. Four vertiginous zones reveal opposing proportions and stages of the moon as if captured by opposing lens apertures. The extruded panel dials up a lunar shadow tilting at an imprecise calendar.

Is the Cezanne title a red herring? Like many of the artist’s works “Moonplay” collapses and inverts figure/ground and synthesizes dimensions, as well as art historical tropes. But I see more of a nod to de Chirico’s descending light, and Magritte’s deflection of logic, as the image is formally contrapuntal and cryptic. Like many Surrealist paintings where the alien and the familiar are mystifyingly equivalent, “Moonplay” conflates the verifiable with myth.

“Falling away” in scripture refers to apostasy –– the renunciation of faith. For Surrealists falling away was the faith. Ramirez’s theological self-reflection, i.e. “how are we conditioned to believe?” within the frame of art history or everyday life, isn’t a benign question. Gathering intelligence in the free spaces between music, architecture and philosophy, however, gives him multiple vistas and a righteous orbit.

← Art: What is it Good For? | The Power of Art in Social Justice Reform
Nature Rambles | Early cicadas →