END_OF_DOCUMENT_TOKEN_TO_BE_REPLACED

Back in the August issue of Community Word, this column mentioned the fact that the Chimney Swift Tower at the Peoria Park District’s Tawny Oaks Field Station had a pair of swifts take up residence and build a nest. I’m happy to follow up by letting you know that the pair successfully raised and fledged a pair of chicks. Hopefully this is the first of many years of successful nesting.

The more I learn about Chimney Swifts, the more I am amazed. These birds live their whole life on the wing unless they are nesting or roosting. While their nesting behavior is a solitary affair, their migration is quite the social spectacle. After the young have fledged the nest, family groups will start to congregate together in “staging flocks” in preparation for migration. These staging flocks are usually comprised of a few dozen birds, but can be larger. It depends on what chimney resources are available to them.

As insect numbers begin to dwindle in autumn, the swifts will decide to migrate in earnest. Smaller staging flocks begin to migrate south. They fly high in the sky during the day. So high, they are almost invisible to the naked eye. Scanning the daytime sky with binoculars on days with a good northerly breeze will often treat the onlooker with a view of hundreds of swifts. As the sun begins to dip to the horizon, these aerial flocks begin to descend towards the ground in search of night roosting sites. Large, industrial chimneys can bring together huge numbers of birds. The Swift Sanctuary of Farmington is an old industrial building north of Detroit, Mich., with a 150-foot chimney being preserved as a roosting colony. It claims to have the largest population of roosting swifts in North America with over 52,000 birds using the site at one time.

Swifts spiral out of the endless sky down and circle these chimneys. Somehow they manage to organize themselves into some type of orderly entry into the opening of the chimney. Some dive. Some drop-in parachute style. Some think better of it, and do a fly-by and make another pass. But somehow they all seem to fit. 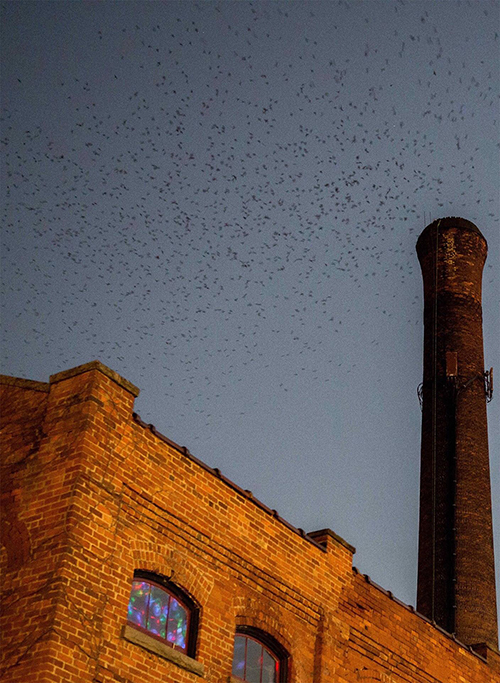 On Sept. 16, I watched over 750 swifts circle the skies above a grade school building in Washington, Ill. At 7:15 p.m., a few brave birds entered the large, square chimney. As soon as the first birds began to enter, the spiraling flock began to grow and tighten its flight pattern from a lazy, slow moving flock to a tightly formed and quickly moving vortex of birds. One by one they began to enter the chimney and the flock quickly began to shrink as more birds entered the roost. It took around 20 minutes for the entire flock to make it inside the chimney, and the sky became an empty quiet darkness.

Sadly, chimneys are becoming a thing of the past. As old industrial sites are abandoned for new energy efficient factories, there is no need to maintain these structures. Many are demolished every year. One chimney being lost can adversely effect thousands of birds. If a flock cannot find a roosting site, it will not survive. We know that birds will return to the same migratory roosts year after year, generation after generation. If their roosts disappear, they will not likely survive migration. Scientists that document bird populations have determined that Chimney Swift populations have declined by 70% since 1966. These declines are largely due to the loss of chimneys for both nesting and migration roosting.

There are several ways for people to become involved with the conservation of Chimney Swifts. One way is to build a nesting tower, like we have done at Tawny Oaks. Another way is to protect and maintain existing masonry chimneys. Gathering information on large roosting sites is also important. Each fall, birding clubs and Audubon Societies throughout the country conduct “Swift Night Out” events to observe and document roosting sites. To find out more, contact your local Audubon Society, or visit the Chimney Swift Conservation Association. If you are on Facebook, Marion Miller’s group, Chimney Swifts over the Fox Valley and Beyond, is a great place to see posts and videos from across our region.