END_OF_DOCUMENT_TOKEN_TO_BE_REPLACED

Misleading attacks on the ballot initiative to amend the state constitution to enact a graduated income tax (“Fair Tax”) range from scare-tactic lies to exaggerations that defy logic.

Some opponents say that a Fair Tax will lead to taxing retirement incomes. That’s the sort of “logic” hogwash 35 years ago, when Chicken Littles might’ve cried, “If seat belts are required, then crash helmets will be mandated.”

OK, paying taxes isn’t fun, but many taxpayers view it less as punishment than an investment in roads, public safety, water, libraries, schools and programs for our communities – all as vital to the economy as business inventories.

The media campaign seems to come down to public interest vs. self-interest. Groups of retirees, workers, small businesses, the disabled and other everyday people vs. the rich and the crowd that’s against taxes, period. 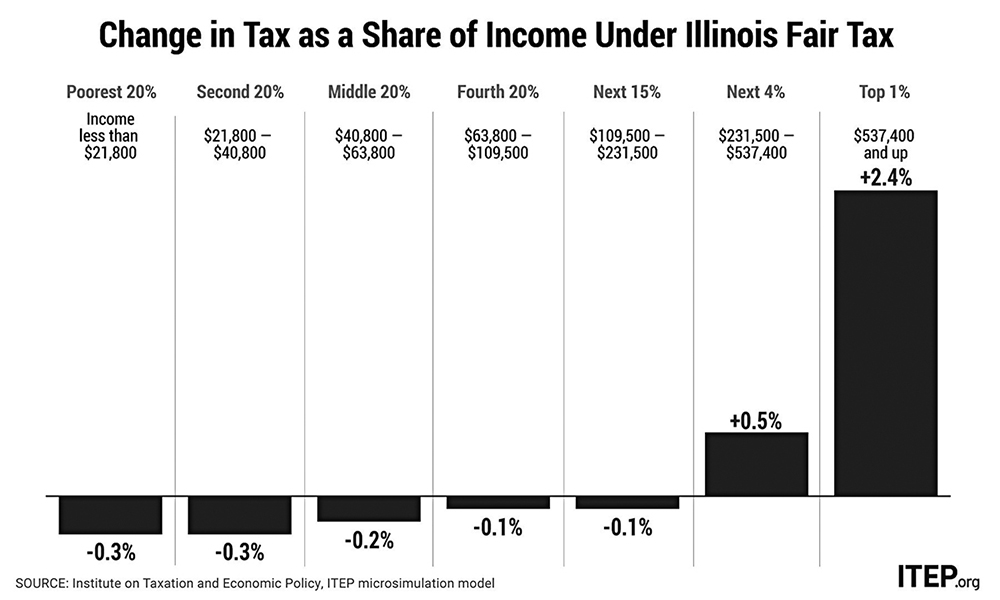 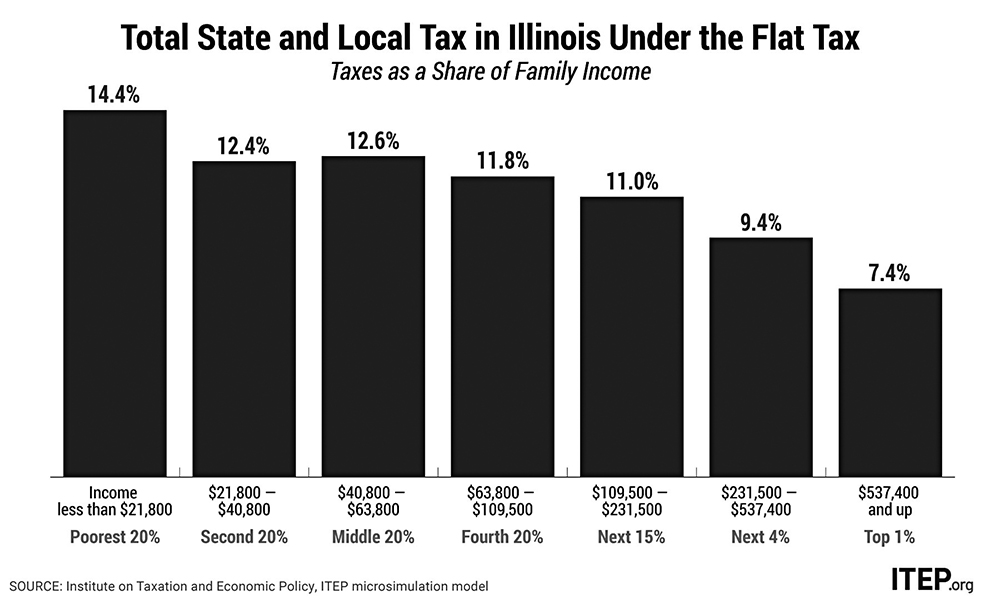 In the Nov. 3 election, voters will be asked to decide whether to permit a graduated income tax that has the wealthiest pay proportionally higher rates. Now, everyone pays an income-tax rate of 4.95%, a millionaire or a McDonald’s cashier. A Fair Tax would raise the rate for people making more than $250,000/year, keep it the same for taxpayers reporting $100,000 to $250,000/year, and lower it for everyone else, according to rates approved in June 2019. Today, the lowest-earning one-fifth of Illinoisans pays 14.4% of its income in state and local taxes, reports the Institute on Taxation and Economic Policy (ITEP), a nonpartisan, nonprofit think tank. That contrasts with the highest-earning 1% of the population which pays 7.4%.

If approved by 60% of people voting on the question (or more than 50% of all voters who cast ballots in the election), it would take effect Jan. 1.

“A tax system that makes the wealthy pay their fair share in order to balance the budget and invest in our local schools, infrastructure and other services will help build and sustain a growing economy – all while providing tax relief for 99% of families in our community,” said Rep. Jehan Gordon Booth, D-Peoria. “My commitment is tax relief for the middle class, expanding access to career training and education that prepares people for high-wage jobs, and making health care more affordable.”

A graduated tax system is the norm, not the exception. The federal government and 32 states including Iowa, Missouri and Wisconsin use a graduated tax.

“Taxes are about more than taxes,” said Lisa Christensen Gee, who wrote the study. “In choosing more regressive tax systems, more of the load or responsibility of the tax falls on moderate- and lower-income taxpayers, which effectively subsidizes the taxes the wealthiest pay under a progressive tax system.”

That’s why wealthy individuals and influential groups are pouring dough into ads to confuse people. They include billionaires Ken Griffin (the state’s richest guy) and Sam Zell (the real-estate mogul who in 2007 bought the Tribune, which was forced into bankruptcy a year later), plus the Chamber of Commerce, the Wall Street Journal editorial page, Grover Norquist’s Americans Tax Reform, trade associations run by and for the 1%, and the Illinois Policy Institute, tied to the Koch brothers and the Right-wing State Policy Network.

AARP endorses the “Fair Tax” and asserts it will not open the door to taxing retirement income.

Opposition hogwash include the Fair Tax giving lawmakers new powers to tax retirees, small businesses or the middle class, or giving Springfield a “blank check” to spend without accountability, or forcing businesses to leave Illinois.

The nonpartisan Better Government Association says, “Only a small share of Illinois 1.2 million small businesses would be affected by the tax plan: only those earning more than $250,000.”

And, of course, lawmakers could raise taxes now, as they did in 2011.

“As someone who has dedicated myself to supporting the aging population in Illinois for the last 30 years, I’m deeply concerned about the misinformation being spread,” said 76-year-old Charles D. Johnson, former director of the state Department on Aging. “No matter who has said it or how they have said it, the simple truth is that switching to a graduated income tax does not allow the state to tax retirement income.”

As for causing an exodus, the Center for Tax and Budget Accountability released a study showing that neither corporations nor individuals leave Illinois due to taxes. Instead, these migrants most commonly cite a new job or job transfer, being closer to family, or housing reasons.

“When the facts aren’t on your side, you’re forced to rely on blatant stunts and outright lies, and that’s exactly what we’re seeing,” said Quentin Fulks, the chair of the Vote Yes for Fairness committee.

“Don’t let Illinois Fair Tax opponents take advantage of you,” said Gaebler, CEO of a business incubator firm. “Monied interests would like you to think the incumbent Illinois flat tax is better. It’s not.

“The opposition says. ‘If you tax the wealthy, you are effectively disincentivizing entrepreneurship’,” said the entrepreneur. But “a flat tax system discourages entrepreneurs – the opposite of what the opponents of the Illinois Fair Tax are saying.”

The state has a $6.2 billion budget deficit, and more cuts in spending aren’t enough. The legislature in the last 20 years has cut public safety 21%, human services 29% and higher education 52%, state records show. If a graduated tax had been used during that time, it would have generated some $50 billion from the state’s top earners, according to The Week magazine.

“We believe changing to a graduated income-tax structure is a step in the right direction to fix our budget mess,” said Lori Hendren, associate state director of AARP Illinois. “That way protects older Americans but not taxing retirement incomes. Only the wealthiest will pay more.”

“Our communities have been living in perpetual crises,” SEIU Health Care president Greg Kelley told the Sun-Times. “We all deserve a brighter future, and this is why we need the Fair Tax.”

Taxing the rich also has support from the general public, according to a Reuters/Ipsos poll this year. Across class, race and gender lines, 64% said, “the very rich should contribute an extra share of their total wealth each year.” Most Democrats (77%) and most Republicans (53%) agreed.

If the “Fair Tax” does not pass, an increase in property taxes and the flat income tax is likely and will affect everyone, not just the wealthy.

If opponents frighten, confuse or distract voters to defeat the Fair Tax, economic and government officials warn that Illinois faces the possibility of an across-the-board tax increase. (Oddly, the Civic Committee of the Commercial Club of Chicago opposes the Fair Tax but supports raising the flat tax rate to 5.95% for everyone.)

If a flat tax hike occurs, grocery workers, delivery drivers, child-care providers and other regular Illinoisans will pay almost twice as much of their income in state and local taxes as the state’s most affluent.