END_OF_DOCUMENT_TOKEN_TO_BE_REPLACED

Fossil-fueled emissions exploded after World War II and now exceed 410 parts per million, a level last seen 3 million years ago when Greenland was ice free and oceans were 80 feet higher than today. Carbon, temperature and sea level, Figure 1 shows, are tightly linked across centuries; as atmospheric carbon increases, so too will temperature and sea level. 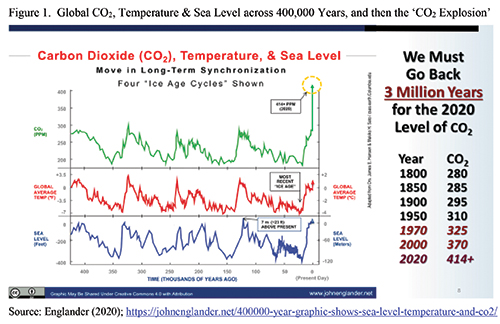 Since the sea absorbs over 90% of the heat trapped by Earth’s atmosphere, our CO2-thickened atmosphere has captured a mind-boggling sum: the heat content of 1.5 Hiroshima-level A-bombs absorbed by the sea each second since 1871, or 7 billion A-bombs worth of heat. The rate now stands at 4 A-bombs per second. We are waging war on the sea.

With the sea fighting back. Warming water expands thus increasing sea levels. Second, warm water undercuts ice sheets which increases glacial calving and flows of land-based ice into the ocean. Third, atmospheric warming is creating more and more lakes and rivers of meltwater pooling on the top of Greenland’s glaciers. When they find vertical fissures in surface ice, they drain with the torrent often descending to the glacier’s base where it lubricates and speeds up movement of ice to the sea.

And on to an increasing rate of sea rise. By 2020 the rate reached 4.5 millimeters per year compared to 2 millimeters per year for the entire 20th century. These numbers are visibly manifest with the Jakobshavn Glacier in Greenland. It lost more ice 2001-2010 than across the entire 20th century. In this 2008 video clip Jakobshavn threw off, in only 75 minutes, a “city of ice” 3 miles wide, 1 mile deep, and twice as tall as Manhattan skyscrapers: https://www.youtube.com/watch?v=hC3VTgIPoGU&t=10s

How high will the sea rise? Given uncertainty over future CO2 emissions and glacier instability, the Fourth National Climate Assessment gives a range of 1 to over 4 feet for 2100 sea levels. A “worst-case” outcome (highest emissions + highest glacial melt), however, yields 6 or more feet (Wuebbles et al. 2017).

A rise of 3 to 4 feet places Miami, Bangkok, Mumbai, etc., under water while the worst-case, 6-foot rise has 480 million earthlings below high tides. For the United States, 4.7 million people and 2.4 million homes and 100,000 commercial properties (a $1 trillion investment) will be flooded at least twice a month.

However, large reductions of emissions could hold the rise to 2 feet or less. If we slash carbon emissions, the number of people flooded at high tide drops to 190 million. In the United States, chronic flooding is reduced to 585,000 people, 340,000 homes, and $132 billion in property.

The choices are clear. Entice citizens through carbon dividends and taxes to slash carbon consumption now or take a trillion dollar loss on property holdings later as millions are forced to abandon shoreline homes and businesses.

← Real Talk | Linking a broken system to slavery and Jim Crow
Art: What is it Good For? | Painting Peoria →