END_OF_DOCUMENT_TOKEN_TO_BE_REPLACED

It can really be hard to be optimistic during a global pandemic that has stretched on for over nine months. However, as I’ve written in previous columns, we continue to see people taking the opportunity to take this time to renew their connection to the natural world. That, in itself, is a reason for optimism. A deeper dive into some research that has happened since this pandemic has impacted our lives is showing some really interesting findings.

This last spring, a lot of people noticed that birdsong just seemed “more vibrant.” At first it was just an anecdotal observation, but Elizabeth P. Derryberry, a behavioral ecologist from the University of Tennessee, Knoxville, decided to research the observations. She wanted to know just how changes in human behavior affects animal behavior. The economic shutdown spurred by the pandemic resulted in less traffic on roads and fewer planes in the sky. Surely birds, who are auditory species, would be affected by the quieting of the landscape. For a study area, she picked a site near urban San Francisco that had long been a place where birdsong had been recorded and documented. The species she chose to observe in-depth was the White-throated Sparrow. 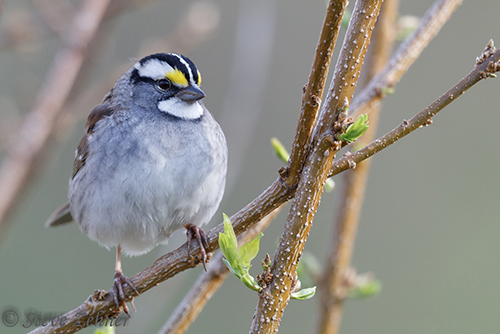 This bird is one of my favorite native sparrows. We see them here in Central Illinois throughout the winter. In the spring, as they begin their move back north, they often take to song –– “Oh- Canada, Canada, Canada” is what their clear, melodic song seems to be saying. It is a harbinger of spring that greets the birder along the woodland edges. Their songs in late March and early April last year were particularly poignant as we were just entering into the great COVID unknown.

Derryberry’s research documented that the post-pandemic background noise levels in her research area had dropped by roughly 7 decibels, or 55%. She compared pre-pandemic bird recordings with post-pandemic bird recordings. She was able to document that the songs the birds were now singing were noticeably softer. Makes perfect sense. Since background noise levels were quieter, the birds didn’t have to shout.

What was somewhat unexpected was the fact that the songs actually changed in pitch and complexity. They added more low-frequency notes to their already impressive songs. It seems that the quieter stage allowed the singer to embellish the song to the audience. Ambient urban noise tends to be a low-pitched rumble. Since this noise pollution was diminished during the pandemic, the birds responded by filling the void with birdsong. The broader band-width and more complex the song, the more attractive the male’s song is to the female. Derryberry documented that the range that birdsong was audible had increased by two-fold. She will next study the breeding success of songbirds to see if the improved soundscape resulted in increased reproductive success.

What amazes me about all of this is just how quickly songbirds were able to adapt to the new soundscape. Nature has a way of bouncing back if we just give it a chance. Our actions, even inadvertent ones, can have positive results. That is reason for much optimism!