END_OF_DOCUMENT_TOKEN_TO_BE_REPLACED

Like the majority of the Inland columns, this is a story about prairie culture, specifically contemporary culture in one Midwestern city. This month it’s about collective action in St. Louis, and it’s about stitching. For decades representation of the prairie has been tethered to a romanticized past. The landscape is mythologized as idyllic and pristine, and it’s a big swath of the ignominiously titled “flyover” map. In recent years, America has awoken to the gun violence of its inland African American neighborhoods while rural populations suffer degraded health and economic tribulation and correlated weapons abuse. Downward spiraling narratives are fed to us routinely by too many media outlets that thrive on click-bait posts of tragedy and spectacle.

The prairie isn’t glamorous, and it doesn’t have curative immediacy. Unspoiled land is neutral, prone to mismanagement, and difficult to commodify. It’s too often exploited as an icon of Americana plodding on an exhausted path of righteousness and purity. Yet the prairie, in its wildness and rich pre-American past, lies just outside our suburban mentality, its broader potential for identification, largely absent in journalism. 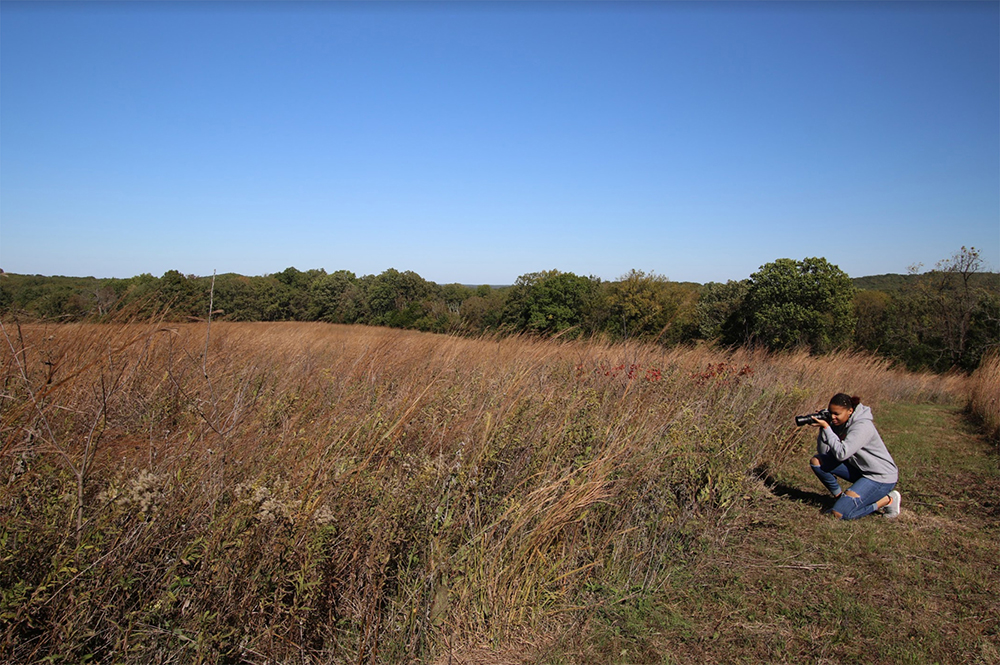 “Peace in the Prairie” a film by the Saint Louis Story Stitchers Artist Collective that will be screened at the Laumeier Sculpture Park this summer in Sunset Hills, Missouri, is a redemptive re-identification of our rural landscape. It’s composed by 16-24-year-old participants and professional artists with a long history of writing, performing and making art that stands face-to-face with the conflicts of contemporary life. What’s remarkable is that the production is replete with the intricacies of urban spoken word performance and hip hop yet surprisingly sensitive to the rural environment’s complex core. The contrast of narrative elements and rhythms that note the alienness of being enfolded in silent spaces is flooring. Slow pans of fields covered with tall grass and native wildflowers soak up multiple voices as they shift from meditative and mournful to vigorous, and finally loving and exalted. Several moments during the hour-long film I recalled the interior narratives and sweeping vistas that embellish Terrence Malick’s productions such as his mystifying “The Tree of Life” and otherworldly “To the Wonder.” The “Story Stitchers” present that kind of grace with monologues, music and smartly-paced montage.

I was continually struck by formal juxtapositions of word to image. The film’s contrapuntal structure, having a fairly traditional opening and closing seemed more about scenes and narratives being equivalent and interchangeable. Content and images were woven, and yes stitched like a quilt, which cloaked the viewer with descriptive inferences about nature as an observer of humanity, and our living other, rather than confederate or servant.

Founded and directed by Susan Colangelo in 2013, a critical focus of the Collective was giving voice to those most deeply affected by the dramatic uptick in gun violence in the city. They have since been dedicated to the documentation of African American youth and other underrepresented cultures in St. Louis.

The Story Stitchers have grown to a nonprofit organization with a small board and staff with two urban project development sites with support from Washington University as well as the City of St. Louis, the Missouri Arts Council, the National Endowment for the Arts and Missouri Humanities among many others. It was just announced that they won a prestigious Lewis Prize for Music, a $500,000 Accelerator Award for youth music programs.

Music is just a part of the Story Stitcher identity. The name was inspired by sources such as quilts used to surreptitiously communicate on the Underground Railroad, and the interactive AIDS Name project quilt that projected significant shared experiences about the devastating breadth of the pandemic. The Collective’s projects include video production, podcasts, spoken word and hip hop performance, and visual art, all with an emphasis on presenting community narratives and obtaining technological, communication, and organization skills. Stitching is an apt metaphor for tethering multiple parts of their lives and ambitions. It also references a vital, connective, hands-on alternative for producing art and learning in an interactive, collaborative atmosphere. It’s the essence of art as social practice with the added value of supplementing education and working for social justice.

Susan Colangelo remains Story Stitchers Director 24-7. She built an original platform for change and is herself one of the artists and mentors in the Collective who works side by side with participants in support of reform and inclusion. They’re found on the web at https://storystitchers.org/.