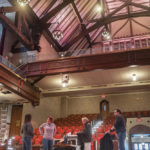 END_OF_DOCUMENT_TOKEN_TO_BE_REPLACED

For years, the E.D. Edwards coal-fired power plant in Bartonville was linked to high asthma rates in Peoria’s Southside neighborhoods, but equally liable could be poor indoor air quality polluted with nitrogen dioxide from gas stoves, water heaters and furnaces.

A court settlement called for the closure of the Edwards plant by the end of 2022, but there are no legal restrictions on gas appliances in Peoria area homes and apartments. Research linking gas stoves with health problems is abundant yet the public is largely unaware of the health risks.

A January editorial in the New England Journal of Medicine recommends no new permits be issued for residential or commercial hookups for natural gas and recommends all new gas appliances be removed from the market.

A number of communities in California have already prohibited natural gas hookups for all new construction.

Peoria Housing Authority Board Chairman Carl Cannon said he is reviewing recent research into natural gas appliances and poor inside air quality linked to childhood asthma. Most PHA units have electric appliances, but Cannon said for the units that still have gas, there may be available federal funding for conversion to electric.

“This is a new administration in Washington. This administration may be receptive,” Cannon said. “If we do something here with positive outcomes, we will share it nationwide” with other public housing authorities.

Cannon said he’s grateful to study this research before the $47 million reconstruction of Taft Homes. The PHA board plans to hire a consultant to oversee reconstruction, and Cannon wants evaluation of gas to be part of that oversight.

Brady Seals at RMI (formerly Rocky Mountain Institute) has studied cooking stoves in Nigeria and the problems with indoor wood and charcoal cooking. She was skeptical when she turned to researching indoor gas stoves a year ago.

“The research is clear. It is convincing,” she said. “The information has been buried for 50 years. We’ve got to sound the alarm now. Gas is bad for the climate and bad for health.”

In Illinois, 2 out of 3 homes cook with gas and 4 out of 5 homes heat with gas, according to RMI research.

Indoor air pollution from gas is an even greater problem for public housing and people living in older, poorer neighborhoods because unit sizes are small and other health risks are compounding factors. People may also supplement heat in winter with their gas stoves.

“If a child already has asthma, exposure from a gas stove makes them even more vulnerable,” Seals said.

RMI focuses on decision makers and public policy. When cost is cited as a reason not to convert from gas to electric, Seals said just the opposite is true.

“All electric is cheaper for everyone. The research clearly supports that new construction should be all electric,” she said, noting that Medicaid would more than recoup the amount it pays for treating asthma by establishing a program to pay for converting from gas to electric.

RMI calculates asthma costs $80 billion a year. An electric range can cost as little as $400.

“It’s astounding we burn fossil fuels in our homes with an open flame! Future generations will look back in shock,” Seals said.

People spend 90 percent of their time inside but the U.S. Environmental Protection Agency does not monitor inside air quality. So the best solution is to prohibit gas hookups for new construction, Seals said.

Interim solutions are to run a range hood that vents to the outside, open the kitchen window when cooking and try to use only the back burners.

In response to a query from Community Word, Jim Chilsen with Citizens Utility Board, issued a statement:

“The mounting evidence that natural gas appliances lead to unhealthy levels of indoor air pollution should be a concern of all consumer advocates. In Illinois, where a majority of homes heat with natural gas, it’s vital that we take a hard look at this problem and raise awareness about it. CUB has increasing concerns about the affordability, reliability, and environmental impact of natural gas. This is yet another reason why the state must begin to move away from fossil fuels and transition toward 100 percent clean, reliable and affordable energy.”

“The science is clear,” said Mark Kresowik, a director with the Sierra Club’s Beyond Coal Campaign. “Burning gas inside homes especially from stoves increases levels of harmful air pollution. Especially now (during a pandemic) when we are spending so much more time inside our homes.”

Another problem for municipalities cited by Kresowik is weatherization that tightens homes and can trap harmful inside air. Over the past few years, there has been a gas pipeline explosion every five days, he said.

In Chicago, CUB is objecting to ratepayers being charged to upgrade gas pipelines that will be forced to close within decades because of outright bans against combustion of all fossil fuels.

“The gas industry is powerful, and it tells a narrative not aligned with reality,” Kresowik said.

Seals said the public information campaign to promote “clean natural gas” can be compared with the issue of smoking and the public denials of addiction by the tobacco industry.

“Build tight, ventilate right” is a slogan Todd Abercrombie likes to cite. He’s the owner of EverGreen Home Energy in Peoria and he’d like to see, at minimum, a building code that requires exhaust fans to vent to the outside but the ultimate goal should be to get off fossil fuels altogether.

“When a pediatrician diagnoses asthma, it would be nice to have the source of the problem diagnosed,” Abercrombie said.

His company performs what’s called a healthy homes analysis looking at air quality, ventilation, mold and insulation among other assessments. In addition to vents in the kitchen and bathroom, there should be an all-home ventilation system.

“This issue is not as well known as it should be but the conversation is getting louder and louder,” he said.

Dr. Kiran Valpula, assistant professor of cancer biology and pharmacology with the University of Illinois College of Medicine at Peoria, said research concluding inside gas combustion compromises air quality is sound and should be heeded.

The New England Journal of Medicine editorial written by Philip J. Landrigan, M.D., Howard Frumkin, M.D., Dr. P.H., and Brita E. Lundberg, M.D., states, “As physicians deeply concerned about climate change and pollution and their consequences, we consider expansion of the natural gas infrastructure to be a grave hazard to human health.”

The American Gas Association has a post on its website disputing the value of the San Francisco Board of Supervisors ban on natural gas in new construction contending it will increase energy costs with little reduction in greenhouse gas emissions. The post contends a comprehensive study shows the electric grid relies on power generated from natural gas, so system-wide gas use remains constant even for all electric homes. The association did not respond to an email asking about indoor air quality and gas appliances.

← Saved from the wrecking ball