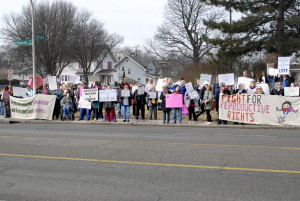 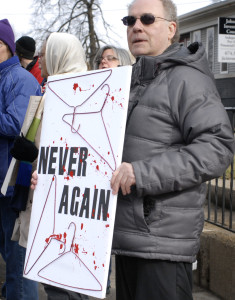 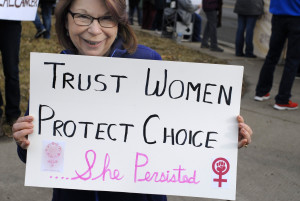 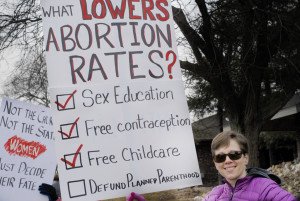 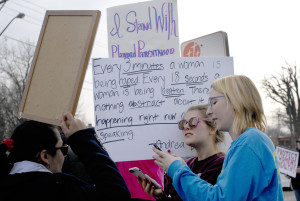 Hundreds of women, men and children lined both sides of Knoxville Avenue Saturday outside of Planned Parenthood to express support for the agency and for the right of women to reproductive health care choice.

At noon, the crowd numbered about 350 people.

The Rev. Lynnda White supports Planned Parenthood and said, “People have a right to be responsible for their own lives.”

Jonathan Weichmann said, “I’m here for my daughter. She’s 3. Planned Parenthood has to be around for many generations.”

The Rev. Lauren Padgett said, “Pro-choice is pro-life. It’s an individual decision women sometimes have to make and it’s between the woman, her creator and her physician.”

She expressed frustration that people who want abortion outlawed claim they are pro-life but they are often also pro-war, hatred and xenophobia.

Laura Satterfield of Eureka said she was at the rally “to protect health care for women. It is so important. So many women and men have periods in their lives when they are without insurance. I was one of them, and Planned Parenthood was there for me.”

One of the event organizers, Rosalie Howell, said “Over the next four years, we are going to have to fight for our rights. Yes, we are pro-choice, but Planned Parenthood does so much more.”

During his presidential campaign, Donald Trump pledged to criminalize women who have abortions and said he would defund Planned Parenthood.

In 2015, a series of heavily edited videos from a group called Center for Medical Progress purported to show officials from Planned Parenthood discussing the sale of fetal body parts. More than a dozen states launched investigations and found no evidence of illegal tissue harvesting and sales.

Sixty percent of the clients served by Planned Parent are poor women on Medicaid who receive HIV and STD testing, pregnancy tests, cancer screenings and birth control from the organization.

Howell said, these women don’t have any other place to go for reproductive medical care.

Ken Hofbauer held up a poster with wire coat hangers and splatters of red paint and the words “Never Again.”

He said it has been 44 years since Roe v. Wade made abortion legal, and “44 years of failed prayers should give people a hint” that Americans want to keep abortion legal and keep women safe.

The Rev. Dr. Phillip Ladd, one of the faith leaders at the rally, was contacted by Community Word later in the day and sent this statement in response to several questions:

First of all Planned Parenthood is not the abortion mill that the political and religious right would have us believe. They provide a wide range of services that are very important. They provide important medical care and other services to many including the underprivileged population. For some reason, conservative Christians have made opposition to abortion a crucial concern even though there is nothing in Scripture to support their concern. About the only passage that deals with abortion is from Exodus 21: 22-23 where if a man hurts a woman so that she miscarriages, then a fine could be suggested to the courts by the husband. This was written at a time that “a tooth for a tooth and a life for a life” was the law of the land. This would be a force abortion which would still be illegal today. However, Scripture did not treat abortion as a murder. Many people agree that abortions can be performed in cases of rape and incest. Well, when you begin to make exceptions, who gets to make that choice? Who gets to decide what the exceptions are. I believe the woman should be the one to make that choice. For me, that is a moral and ethical issue. One of my signs said, “Pray for Women’s Reproductive Rights”. Pro-lifers say they are supporting life. However, it seems to me that they only “support life” when it comes to controlling women. If they really believed this, they would support life after birth also and support laws to help poor and disenfranchised families. As far as church history, until the mid-1800’s the church did not believe that human life began at conception. Scripture and church history do not consider abortion equal to murder. Jesus always stood up for the rights of others including women. As a person of faith, I try to follow that example. Therefore, I am pro-choice and I support Planned Parenthood.

There was a small counter rally calling for the defunding of Planned Parenthood.