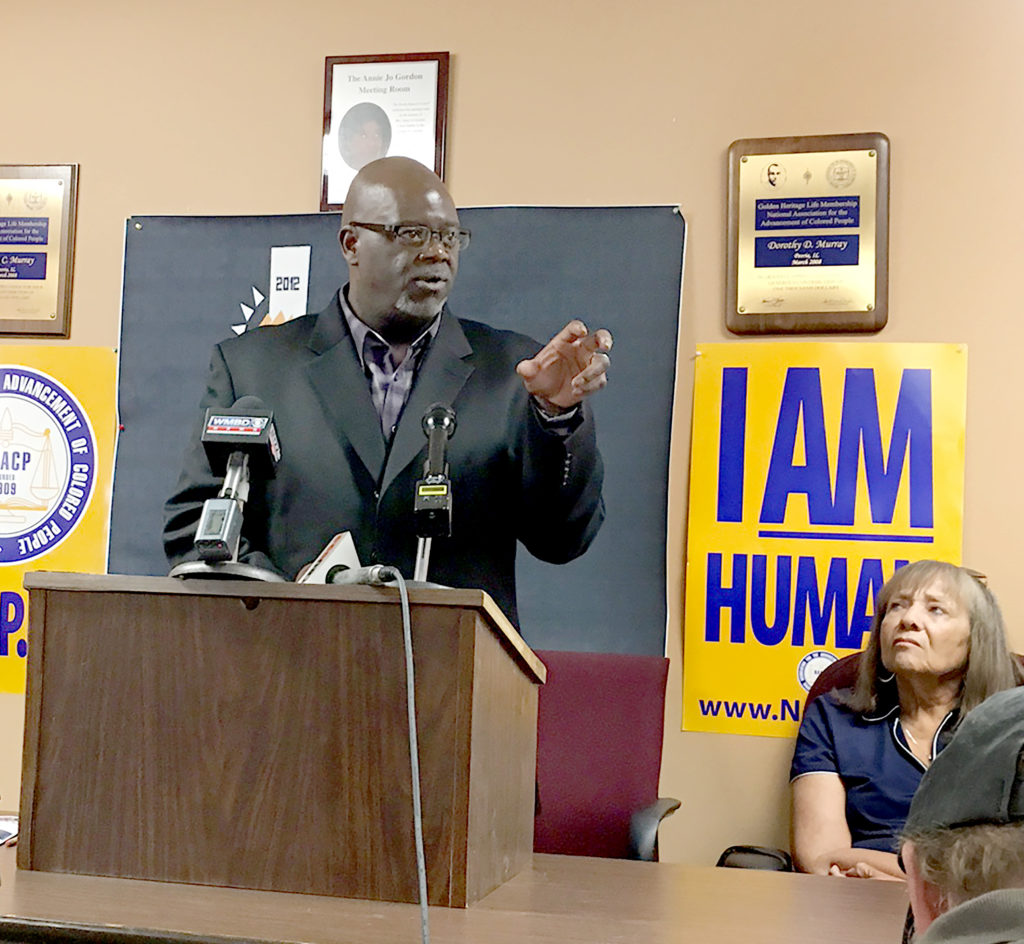 The Rev. Marvin Hightower, president of the Peoria NAACP, answers questions during a press conference Friday expressing disappointment over police commendations of valor given to six officers involved in the shooting death of Eddie Russell Jr.

BY CLARE HOWARD
Words were not hurled in anger or indignation. They were employed with cutting precision. And shock. There was clearly stunned disbelief and a sense of betrayal.
Representatives of Peoria’s African-American community expressed pain, fear, frustration and resolution at a press conference Friday afternoon at the NAACP offices regarding commendation of valor awards given to six police officers involved in the shooting death of Eddie Russell Jr. in Peoria on Sept. 20, 2017.
How is that valor, how is that bravery when six police officers shoot and kill an African-American man with a known history of mental health issues after a prolonged standoff, asked Don Jackson, attorney and past president of the Peoria and Illinois NAACP.
“It is absolutely outrageous these officers are being given an award,” he said. “Six of them shooting one man, and that’s bravery? What were these decision makers thinking?”
He said this kind of thinking proves all African Americans, especially young men, are in jeopardy of being shot by police.
The Rev. Marvin Hightower, current president of the Peoria NAACP, said he is “disgusted and upset” these officers received this award.
“I am a pastor, and I have a moral obligation to stand up for what’s right” he said, noting that interim Peoria Police Chief Loren Marion referred to the death of a police colleague as equivalent to a death of a family member. Hightower said Russell’s death was like the death of a family member to Peoria’s entire African-American community.
Following the police shooting death of Michael Brown in Ferguson, Mo., Hightower and other members of the Peoria African-American community met with then police chief Jerry Mitchell and expressed concern that kind of shooting not happen here.
“We are not immune to that. We are one bad decision away from that. And September 20 that came to pass,” he said. “OK, he (Eddie Russell Jr.) was on camera robbing a bank, but it was well known he had mental health issues, and we believe something else could have been done. But he was shot 17 or 18 times. These police officers should not get commendations. That is a slap in the face to the African-American community.”
Eddie Russell Sr. said the commendations awarded to the officers were “a slap in the face felt real hard.”
He recalled being at the scene of the standoff and telling chief Marion, “I need to find my son before you kill him.”
He noted that one of those police officers was also involved in the shooting death of Daniel El after a traffic stop.
“Daniel El did not need to die,” he said. “How can a traffic stop turn into a killing.”
Sherry Cannon, with the Elite program, said she feels frightened for the safety of black children. She urged people to contact legislators to demand that more be done to prevent this.
Hightower said the way forward is to focus on policy issues designed to change the culture.
“This is egregious and immoral and should not happen again,” he said, noting Peoria needs to become more involved in a statement of 10 shared principles formulated by the Illinois NAACP and the Illinois Association of Chiefs of Police. The document is designed to bridge the gap of mistrust between police and the black community.
Bartonville police chief Brian Fengel is president of the Illinois Association of Chiefs of Police and was involved in crafting the document of shared values. Also involved was Peoria Park District police chief Sylvester Bush.
The Bartonville police department is the first in central Illinois to adopt the principles of shared valued.
In response to a request for comment, Peoria Police Chief Loren Marion said, “The NAACP has a right to express their opinion.”