At a Monday press conference, the Rev. Marvin Hightower, president of the Peoria chapter of the NAACP, urged an end to the violent protests that have gripped Peoria and the country following the police killing of George Floyd, an African American man in Minneapolis.

Hightower said it’s right to be angry but don’t lose focus on the bigger issue to end institutional racism and the criminalization of Black men.

At about the same time the Peoria NAACP was holding its press conference, President Trump was on a call with the nation’s governors. People listening to the conference call were becoming alarmed, Tweeted Robert Costa of the Washington Post. Trump urged the governors to take back the streets, not be “weak” and to use force as the nation faces growing racial unrest.

Sincere Williams, one of the organizers of a peaceful protest in Peoria on Saturday with 1,000 people, urged citizens to push for legislative action.

Rev. Hightower said, “We are done with dying. Vote in November.” 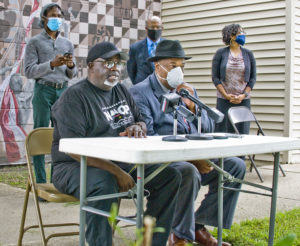