END_OF_DOCUMENT_TOKEN_TO_BE_REPLACED

In 1981 Gary Justis and I showed together at Randolph Street Gallery. It was our first solo exhibition in Chicago, each taking a floor of the expansive new site just off Halsted — an area that would gradually draw galleries pinched in the Superior/Huron district.

Randolph Street Gallery was fast becoming the focus of an emerging community of younger artists shepherding an influx of exhibitions, performances and installations and establishing connections with artists and similar spaces in other cities — just as N.A.M.E. and Artemesia galleries had done a decade earlier. Randolph Street complemented and reformed the alternative gallery structure becoming more of a collaborative project space with a director and artist board whose staff circulated among various Chicago collectors, museums, art schools and journals. Here Chicago continued to expand and cultivate its art identity, build its language and develop a platform between the expanding art museums in the ‘80s and the resilient “Uncomfortable Spaces” phenomena to come later.

Gary’s Randolph Street show of art machinery initiated dramatic formal and conceptual strategies about sculpture and electronic display and revealed his instinctive touch for technology and light that he has continued to augment. His show was a perfect example of the kind of innovation supported by a more freewheeling National Endowment for the Arts and Illinois Arts Council policy. These agencies were touted for sustaining local artists and their milieu in both coastal and inland locations.

Shortly afterward, Gary had a solo show with Marianne Deson, one of the city’s most visible and progressive dealers who had connective tissue with the city’s artist-run spaces. Not long after he would receive attention from museums and reviews in the national art press. Eventually he would land a full-time position at Northwestern and then at Illinois State University where he has taught since 1998.

Gary’s skill for constructing extraordinary mechanical devices with a variety of amorphous visual projections calls to mind an often undervalued status of technology in modernism. His contribution to that discourse, which addresses geometry, technology and design, as well as the science of spectroscopy has been measured and fertile. He revises much of what we think we know about proportion, scale and illusionism in the process. His production is thick with interrogative spectacles — a pleasant antidote for the measure of entropy and vestigial sensationalism in art and popular culture.

Gary loves constructing objects and endowing them with demonstrably uncanny outcomes. Unlike artists who appropriate dated technology in order to breathe life back into obsolescence, Gary shows how seductive and fluid structural inquiry still is. His work moves. It’s performative and computational, sometimes parodying sensitively calibrated surveillance systems or riffing on elaborate home audio hardware. A more tangible equivalence might be a technician’s optic test-bed with lasers, parabolic mirrors, wave sensors and coronagraphs, as Gary’s modification of technological furniture is closer to that of an engineer. He carves a niche that demands more rigor than either an artist’s fidelity to craft or a designer’s to taste. The works’ time-based rhythms and patterns of spatial maneuver are unceasingly harmonious and in the moment.

Gary will be giving a lecture about his work at 5 p.m. Thursday, April 5 at the Horowitz Auditorium, Bradley University. 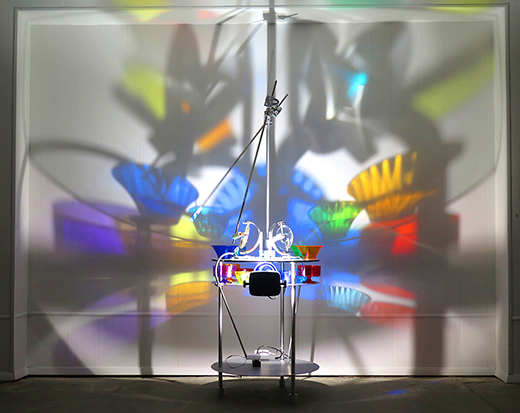