END_OF_DOCUMENT_TOKEN_TO_BE_REPLACED

I was recently talking to a physician – early 30s, tastefully dressed, well educated beyond medicine, and enthusiastic about culture and his growing art collection. He spoke about philosophers from Michel de Montaigne to Friedrich Nietzsche regarding the nature of pain, the “discipline of suffering” and how it’s manifested societally. It was clear he was deeply invested in his extra-medical reading and enjoyed the degree to which art and medical practice depended on observational skills, attention to nature, an investment in a quality of life, etc. One couldn’t help but be impressed. Lots of doctors are art collectors. Many like antiques, old cars, first-edition books and have beautifully appointed homes. Not all have the breadth of interests to include contemporary art.

He eagerly showed me a few pieces of his collection on his phone – expressionist oils of figures and abstractions with dark impasto surfaces and said he’d bought them from a gallery on Michigan Ave. There were shots of the artist posed with the work. He had been assured by the dealers of the works’ validity and worth. A quick glimpse, however, revealed that he had been duped. Given his intellect, I was surprised how vacant his sensitivity to art really was. I politely explained that the gestural images in gilded frames were formulaic and amateurish. He was as taken aback by my comments as I was to his collection. He let a posh showroom and a flattering sales person snow him, revealing that too often even the brightest people really consider collecting as just another mark of status.

Collecting contemporary art is rife with conflict for many – artists, audiences, collectors and curators. For those at a distance to the profession it can be labyrinthine. At its core art is driven by a debate about social and disciplinary reform, and complicated by an internal critique about perception and beauty. From the beginning of modernism its subject was a reflection on identity on one hand and forecasting culture on the other. In formal terms this meant abandoning a reliance on naturalism and traditional narratives. This break with classicism was aesthetic aggression – an image rebellion that permitted egalitarianism, passion, ideology and technology on the same stage. Radical new images reflected everything that was absent from classical art and substituted a theory of culture purported to transcend time and place. It’s not to say that contemporary art is required to live up to a once in 4,000 year cultural revolution. Art can also be humorous, meditative and private but the look and feel of contemporary art, the studio practice and critical judgment owes everything to the turn of the 20th century.

Today blue-chip galleries, project spaces, museums and university galleries don’t make comprehension of contemporary art any easier. They debate art language only through a blending of visual culture with no consensus as to the most critical or avant-garde. Novelty and spectacle remain the driving force. Too many museums produce a perfectly homogeneous calendar of sophisticated, corporate entertainment, which is the common denominator for culture seekers. With a Marina Abramovic event one month, Maurizo Cattelan the next and then maybe a collaborative social network project immediately after, content becomes muddled and you’re left with sensational millennialist side shows. For all its foibles the modernist debate was at least a coherent one.

Contemporary art is the only culture that is essentially unattainable for the general public. Most of us can experience and discuss the popular or cutting edge work in any other art form. We can actually influence the market through our purchases. Music, literature, and film by the best practitioners is affordable. We own it or we ignore it and it withers. It’s capitalist and it’s populist. Not the case for equally significant original artworks, even if there was a consensus as to what was the most relevant or stimulating. You have to visit the enclaves –– galleries, artists’ studios and museums, but ultimately important art is too much of an investment in time and resources for the public to seriously engage. As a result, the fine art market permits us to only experience the product at a fashionable distance –– which only serves to further mystify the work. No wonder even smart people feel alienated and confused. Modern art used to want nothing to do with popular markets but for decades now it has transformed into a very elite version of popular culture. That paradox has not been lost on a younger generation of artists as well as artists outside the coastal art market who seek alternatives to the hubris of the big gallery and museum system.

So to potential collectors –– become acquainted with art faculty in the region. Go see student shows. It’s the season. BFA, MA, and MFA shows are up now and student artwork is accessible and affordable. Students are skilled, have great instincts based on art historical research, and would love to talk to you even if you don’t buy. Go to Bradley’s Creative Art Center and definitely visit the artist-in-residence studios at the Prairie Center. Consider hand-thrown pottery, prints, photography and fiber art which are some of the most reasonably priced and best examples of inland art you can find. Spring is the perfect time to do this. The more you learn about art the more confident you’ll be about anything in your world that demands an educated eye and that’s just about everything.

Bradley has several student shows up right now. They include Patricia Keck’s MFA exhibition at the Hartman Gallery, the BFA and Graphic Design Portfolio show at the Prairie Center, as well as a pop-up show at Hartman, and lastly the annual student sculpture exhibition at The Studios on Sheridan. In June, Bradley has a show of graduate and undergraduate work at the Madron Gallery in Chicago. And of course if you’re in the city then or any time and you find yourself on the east side of Michigan Avenue, go to the Cultural Center or the Chicago Architecture Foundation but stay as far as you can from the tourist galleries. 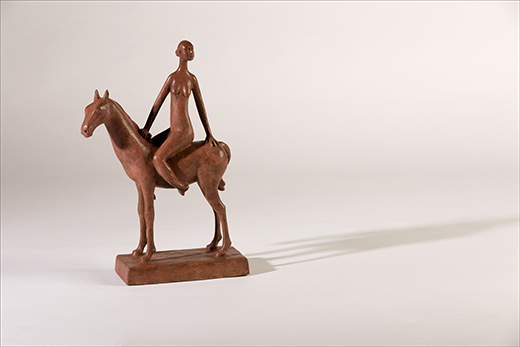