END_OF_DOCUMENT_TOKEN_TO_BE_REPLACED

Curator and artist Jessica Bingham just organized her first exhibition at Illinois State University with the work of native Illinoisan, and now Brooklynite, Katie Bell. Bell studied at Knox College and then at Rhode Island School of Art & Design before moving to New York some eight years ago. Since then she’s developed a substantial studio practice with sprawling fragmented assemblages that acknowledge a critical history of hybrid play.

Bell gathers and assembles forms that sidestep the allegorical in favor of an epistemological art and design practice. It’s actually something gleaned from her parents who are in the home construction and design trade. The materials they use, she uses, but as one would expect crossbred and improvisational. She flaunts the lo-tech construction from which her objects are resurrected and repurposed. Her disinterested miscellany is made of everything from roadside debris to discarded construction materials and house paint.

In “Standing Arrangement,” the artist joins materials from the gallery vicinity with previously found objects like tarps, laminates, molding and rope to draw attention to the exceptionality of the gallery dimensions. At first glance a tone of perilous nonchalance, a kind of cake-and-eat-it-too after it’s been stepped on at the picnic, detachment gets your attention. As a result she’s able to fuse a metaphorical blueprint into a 3-D production, crafting a textbook work in progress. Her in-formalism is essentially a sketch left in the rain, pressed, patched, detailed and hung out to dry. Fragments of separate wholes circulate from street to studio to gallery and then back to the street through a 30- foot wide floor-to-ceiling window that floods the gallery with daylight. 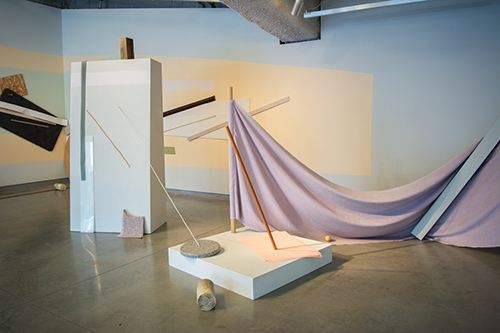 “Standing Arrangement,” an installation by Katie Bell, is on display at University Galleries, Illinois State University through Aug. 4. (PHOTO BY JESSICA BINGHAM)

Bell’s makeshift, slightly dissonant, compositions profile the orbit of the early avant-garde and they’re vivid in this installation. “Standing Arrangement” echoes the Constructivist penchant for stretching the contours and objective of painting as far as technology and aesthetics would allow. It prompts El Lissitzky’s “Proun” guide for rational and imaginary spaces as well as Malevich who flattened studio corners and painted flags of curatorial autonomy. There’s also a hint of Varvara Stepanova and Alexandra Ekster who conceived soaring theater stages, and costumes that upstage performance narratives. Lastly there is a minor byproduct of humor in the flesh of giant broken toys – also a feature of the Russians.

Recently Bell has included architectural columns to punctuate the fleeting arrangement of patterns and objects. It’s tempting to make a connection to antiquity as the installation already suggests a degree of disuse, but her “ruins” are not nostalgic, not even for the faux-tropic design motif adapted from ’60s SoCal chic. In fact a sense of localism and casual exoticism suggests that her tableau is agreeably transitory and vulnerable – a one-act drama starring anonymous artifacts and quick-witted stage directions. But it’s more. It’s a recitation, a recuperative meditation on the endurance of abstraction, pattern, and convention in a recyclable world.

Since the ’60s, the idea of rehabilitating modernism – reconnecting fine art with ordinary experience has existed in various forms. For studio artists a dislocation of objects from traditional contexts has been key in enhancing everyday life while buttressing abstraction’s contemporary art world impact. Bell’s work is accessible in that sense, but is also a kind of test, reminding the viewer that culture may not be new and never “created” (which is fine for myths) but is always in flux. This is fair game for those with the requisite skills to compare patterns of cultural production and exchange because knowing how to build and orchestrate objects engenders something more realistic than virtuosity and truth – plausibility.

← Art: What is it Good For? | Big Picture Peoria and the next generation of public art
Reflections From A Hindu Perspective | The wish granting tree – Kalpataru →