END_OF_DOCUMENT_TOKEN_TO_BE_REPLACED

Through the work of the Eagle Nature Foundation, there have been many established facts in regards to the numbers of the wintering bald eagles. The amount of bald eagles being counted over the 51 years the Eagle Nature Foundation has lead the annual bald eagle count in the United States show constant variations in numbers. In Central Illinois, volunteers like Mark and Kealy Werner, keep the enthusiasm for the count alive each January. Their hard work shows in a documentation of the numbers listed. Without the volunteers helping, the Eagle Nature Foundation would not be able to determine hypotheses about the difference in bird statistics each year. Mark and Kealy are two of many volunteers that give of their time in order to support the wintering bald eagle in its quest to endure.

In the realm of general bald eagle facts, the Eagle Nature Foundation website, (http://www.eaglenature.com), states, “Today, except for the Southwestern bald eagles the bald eagle has been removed from the “Threatened Species List” in the United States. Its number has dropped dangerously low over the last century, for a number of reasons. However, the outlook is getting better…A major part about our heritage is informing Americans about our National Symbol…(to help it survive and flourish as a valued part of our heritage.” With the decline of the bald eagle comes the loss of a major bird species within our country that contributes to the succession of natural life. Our role in bald eagles succession is to uphold them as a beautiful creature in our ecosystem without harming them.

The bald eagle is a beautiful bird of prey that eats mainly fish and other creatures in order to sustain itself in the outdoors. Adults, according the Foundation website, “(have a) dark brown body, white head and tail, yellow feet, beak and eyes. Immatures (have a) normally dark brown body, showing white in the wing linings and breast. (They) have a brown head, tail, feet, beak and eyes (similar) to appearance in the golden eagle without white on the tail.”

The diet of a bald eagle is truly remarkable and their determination as far as finding food if fish are not available is astounding. According to the Foundation website, “Sixty to ninety percent of a bald eagle’s diet consists of fish. The birds generally scavenge dead fish, although they will catch a live fish as well. They will take an occasional heron, crow, grouse, duck, gull, or small mammal, especially if a fish is not available…The bald eagle is an opportunist and will sometimes steal fish from an osprey or crow…The bald eagle uses several fishing techniques. A favorite method is to perch in a tree and watch a fish swimming in open water nearby and swoop down to catch it.”

Bald eagles also have amazing nesting habits that allow them to carry their offspring and continue through generations. Wintering bald eagles nest in Northern areas of the United States and Canada in order to migrate in fall as well as winter, when frozen lands freeze over. They move to open water sources throughout to search for fish and other forms of prey. The major concern for this species evolves from the “lower 48 states having smaller numbers” with less reproduction as stated on the Eagle Nature Foundation site.

According to the Eagle Nature Foundations website, “Conservationists view recent improvements with cautious optimism. But much work remains to be done—increased preservation of crucial natural habitat, greater public awareness of the eagle’s problems, plus more public and private funding for conservation and research.” Thus, the importance of keeping this bird alive is not only beneficial to the food chain, but to the overall ecosystem due to its habits and positive attributes that make it helpful to survival.

The concern for the bald eagle population is great in the river areas with number fluctuations each year determining a possible rise or fall dependent up on the area. Eagle Nature Foundation Executive Director Terrence N. Ingram states, “Winter bald eagle populations along the Wisconsin and Illinois rivers used to average close to 50 to 55% immature, which would offset the low percentage of immature wintering on the Mississippi River. This year the immature percentage along the Wisconsin River remained the same as last year at 41.7%, the Illinois River immature percentage rose 8.6% to 38.3%, while the Rock River percentage dropped 15.3% to 39.9%.”
The Foundation has a strong history of supporting the well being of the Bald Eagle count by hosting the count year after year and is the only one day bald eagle count in the nation. The Eagle Nature Foundation news release states, “The Annual Midwinter Bald Eagle County sponsored by the Eagle Nature Foundation, is the only one day bald eagle count in the nation, that encompasses so much for the country. It extends from northern Wisconsin and Minnesota to Tennessee. ..The 2011 Annual Midwinter Bald Eagle County recorded a total of 2042 bald eagles wintering along the Upper Mississippi River and its tributaries, which include the St. Croix, Wisconsin, Rock, Missouri and Illinois Rivers, compared with a total of 1567 last year.” Thus, this organization is extremely important to understanding what has happened with bald eagles over the years and helps to determine how we can help save the species in the years ahead.

Overall, the significance of learning about bald eagles and actively supporting the Eagle Nature Foundation, whether through knowledge, donation or volunteer service, makes the organization very noteworthy to help achieve bald eagle prevalence in the United States. The message is to keep these species in their habitats through education and helping create balance for eagles in a world where humans can help their chances to thrive. All in all, the wintering bald eagle is an extremely valuable bird in the chain of environmental stability and should be protected for its contribution to the system of life. 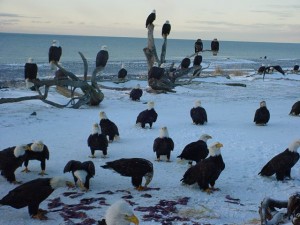 Wintering Bald Eagles in Their Habitat. 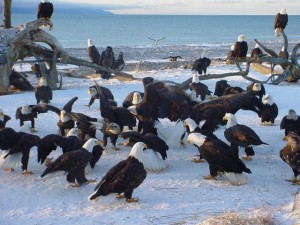 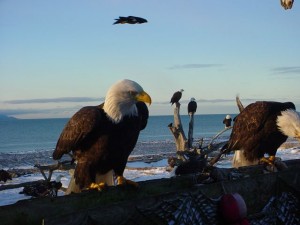 A Closeup of a Wintering Bald Eagle and Others Perching.