END_OF_DOCUMENT_TOKEN_TO_BE_REPLACED

Chloe McEldowney is a young artist who has been living in Peoria for just two years. During that time she’s made an impression on the art community, receiving a residency at the Prairie Center of the Arts and contributing a stunning large-scale self- portrait that drew the attention of just about everybody at the recent Bradley International. Although McEldowney is a painter with sophisticated technical prowess and formal instincts she has even more to offer with respect to social issues. A figurative artist who concentrates on portraiture, her work embodies a great deal more than resemblance or common assumptions about beauty, or reality for that matter. Archetypal but careworn children’s faces reach the height and breadth of her panel surfaces and despite their larger than life dimensions are unusually intimate, melancholic and familiar. McEldowney paints candidly and improvisationally. Her sitters look burdened but spirited. 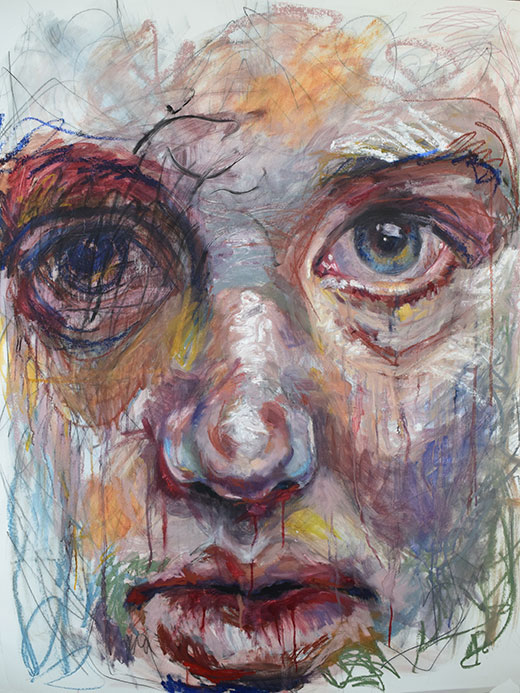 “In the Mirror, Again” by Chloe McEldowney

The artist’s work lies formally and ideologically between the sullen painterliness of Alice Neel and the clamorous gesturalism of Jenny Saville, two of the most compelling paint-handlers and interrogators of human fragility in the last 60 years. While the subject of trauma and oppression has been a trope of modern art for more than a century, McEldowney pursues it with fresh painterly vigor. The children in her work may no longer be the victims of past abuses like child labor (thanks to unions), and unchecked paralytic diseases due to breakthroughs in medicine, the psycho-social toxicity that previous generations only felt as adults is widespread among today’s youth. A tenet of modernist art is the unveiling of that which is hidden – usually those that are powerless – launching a platform for them and their condition to be acknowledged. An epidemic of childhood forfeiture has produced a class of victims with only piecemeal care and McEldowney’s portraits shine some light on this crisis. 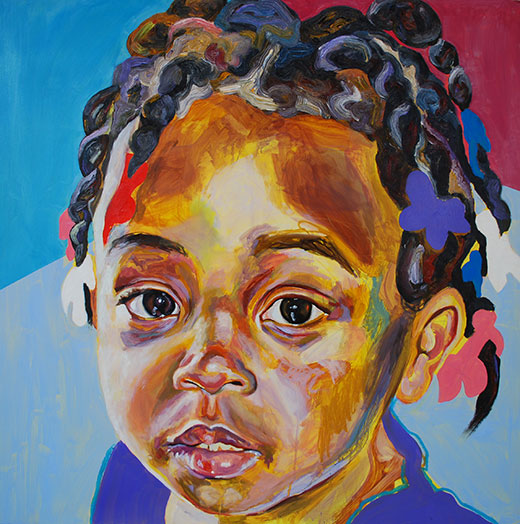 One of the most thorny subjects for those artists who reject idealized portraiture, are those of children. McEldowney approaches them with a rare combination of deliberation and empathy. Her paintings are daunting.  Doleful eyes reflect a narrative of neglect and omission, yet the work is never mawkish or pitying. Her innocents have the complex, compromised demeanor of adults. Color and the physical complexity of her compositions make her subject’s presence vivid and factual. The truism that painters render themselves in their portraits is definitely at play here. How else could an artist combine a sanguine technique with such disquieting content if it was not secure in her hand and her intellect.

The artist’s subjects have been a big part of her own upbringing. MacCeldowney was raised on a southern Ohio farm where her parents fostered, nurtured, and sometimes adopted disadvantaged youth. Her life with them now generates visual documents that externalize her compassion. By saturating the image with feral pigments and radiant light she shares an empowering, personal text. Her painting being contemplative, there’s more time for viewers to watch darkness mediated by her curative brushwork.

A generation or two ago artists might have expressed states of woundedness that reflected more about the artist than the subject. Today, it’s not enough to produce anxious images that make us feel fortunate not to be victims. McEldowney is prompting us to see ourselves in the artwork, and perhaps challenging us to recognize that we are surrounded by more than just a handful of disenfranchised children and clueless adults. Her work reflects systemic indifference and critiques our facades of family, normalcy, and security.