END_OF_DOCUMENT_TOKEN_TO_BE_REPLACED

At the Peoria Park District’s Tawny Oaks Field Station, we are working hard to enhance the area for nesting birds. I feel like a new landlord; hanging out the “tenant wanted” sign and hoping for full occupancy. As with most things in life, I’m learning that patience is imperative. Some houses are filled, while others are vacant. You might be undergoing the same dilemma in your own pursuits to enhance your backyard. Here are some observations you might find useful.

We recently put up two new Purple Martin boxes. Each box has 14 separate compartments. Martins are colonial nesters and live in groups. We regularly see Purple Martins at Tawny Oaks, and last year they were regular visitors, flying over our prairie and gobbling up insects. They migrate south for the winter, and tend to come back in April and set up nesting. What you might not realize is that Martins have a really good homing instinct. If they were successful nesting in a location one year, they will come back to those boxes and set up nesting the following year. This is called “nesting fidelity.” So if you have put out a new Martin house this spring, you might not have Martins nesting in your boxes yet. But don’t fear. If you have observed Martins visiting, feeding on insects in prior years, they will be visiting this year as well. While they might not immediately take up nesting, they will notice your houses. Martins can decide to take up nesting sometimes as late as the end of June, and these late nesters are often last year’s young who didn’t have room in the colonies they were hatched from the previous year. Their tardiness is your gain. Also, later this summer, fledglings from other Martin colonies will be taking to wing, and they will notice your open real estate. When they do, they are inclined to come back next year and take up residence. When establishing new Purple Martin colonies, it takes patience. 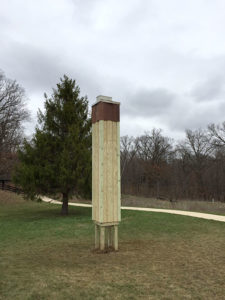 I live in an older section of Washington, full of old houses with many chimneys. This Chimney Swift tower structure at the Peoria Park District’s Tawny Oaks Field Station on Singing Woods Road was constructed to attract nesting Chimney SwiftChimney Swifts are numerous and their chatter and aerobatics are a common evening ritual I enjoy on my walks around the neighborhood. A couple of days ago, I ventured into the “new part of town.” The houses here were all built a few years ago. They have high efficiency furnaces and the houses have no chimneys. They also have no Chimney Swifts. The life history of the Chimney Swift is a fascinating one. Like the Purple Martin, they are insect eaters and migrate south in the winter. When they are either arriving in spring, or departing in fall, they are very gregarious. They hang out together in groups and roost together at night in large numbers. Big, old, factory chimneys can have a swirling tornado of thousands of Swifts funneling in to roost for the night. But nesting season is a different story. They become territorial, and any one chimney, will have only a single pair of birds that will nest there. Unlike Martins, they are not colonial nesters. The fact that new houses are build without chimneys, along with many older chimneys being capped, has caused a rapid decline in Chimney Swift numbers. One solution is to build “artificial chimneys.” And that’s what we have installed at Tawny Oaks. It is a free-standing structure about 16 feet tall, made of wood standing near the picnic shelter. It elicits a lot of questions. I call it “The world’s biggest bird house.” Our Trail-Team volunteers, under the technical leadership of Bob Price, built it. Chimney Swifts, like Purple Martins, exhibit nesting fidelity, so no nest yet, but we have a regular flock of visiting Swifts circling the structure and checking it out. I’m confident that one of their offspring will find it a comfortable abode. This fall we hope to see some more activity as Swifts group together during migration.Another thing I’ve learned is that some species are quick to take up residence. Steve Montez is our volunteer who monitors our Eastern Bluebird boxes. Recently, he added to the number of new houses at Tawny Oaks. He installed one on Sunday, and three days later, a pair of Bluebirds had started building. House Wrens and Chickadees have claimed those houses not occupied by Bluebirds. These bird species don’t have a strong devotion to nesting fidelity, and they all raise several broods per year. So for them, being open to a new abode is a necessity in a competitive market.