END_OF_DOCUMENT_TOKEN_TO_BE_REPLACED

Mike Miller stood at the bottom of a ravine 25 feet deep off High Point Terrace and shook his head. The crevasse was growing with every rainfall and ripping out trees, vegetation and rocks in its path. It’s an ugly scar on the north end of Forest Park Nature Center, a 540-acre forested preserve. Cost of mitigation: $260,000. 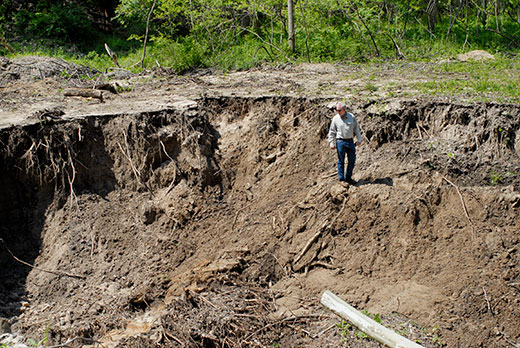 PHOTO BY CLARE HOWARD
Mike Miller, a supervisor at Peoria Park District, hikes along the top of a 25-foot deep ravine that cuts through the northwest side of Forest Park Nature Center. The ravine was growing because rainwater runoff from High Point Terrace and about 400 surrounding acres is diverted to the site. The Peoria Park District has undertaken a major mitigation project. Miller said developers and homeowners have to start thinking of water as a resource to retain and manage on their property rather than as a problem to rapidly drain from their land. Otherwise, erosion like this will occur more frequently.

Miller would rather work on erosion control at Singing Woods Nature Preserve and discuss a new bioswale constructed at a cost of $4,000 to handle rainwater. As native deep-rooted vegetation grows on the site, it becomes more diverse and more reflective of the region’s historic ecosystem.

In one year, about 75,000 gallons of rainwater hits the roof at the Tawny Oaks Visitor Center at Singing Woods Nature Preserve. Gutters used to direct that water over the hill where it was augmented with agricultural drainage, but erosion started forming gullies, said Miller, supervisor of environmental and interpretive services at Peoria Park District.

To combat that erosion, planning started on a bioswale.

Designed by Jim Nelson of Nelson Land Management in Springfield, the bioswale covers 690 square feet and can handle 4 inches of rainwater in a 24-hour period in a series of small cascading pools. It’s planted in deep-rooted native species like no-mow fescue, big blue stem, little blue stem, indian grass, common milkweed, goldenrod and blue flag native iris. These are thirsty plants that drink up water through deep roots compared with turf grass that has been called the equivalent of concrete in terms of water infiltration.

Miller said the park is holding a native plant sale Aug. 26 at Singing Woods. He also expects to hold classes for people who want to learn more about installing bioswales to prevent erosion. The concept is adaptable for individual homeowners and for neighborhoods.

“This requires people to rethink the idea of a yard,” he said.

Rather than chemically-treated turf lawns, homeowners need to incorporate deep-rooted, water-absorbing perennials in their landscapes.

“One day from the top of the hill (on High Point Drive) to the bottom, I counted 21 different lawn care companies maintaining monocultures. That kind of lawn requires constant maintenance and mitigation expenses,” Miller said. “There is some maintenance with a bioswale and rain garden but much less annual maintenance than is required by monocultures.” 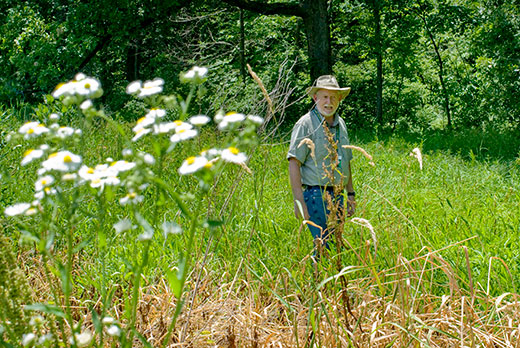 PHOTO BY CLARE HOWARD
Mike Miller stands in an ephemeral wetland, part of a natural ecosystem for managing rainfall. These areas are often destroyed for residential and commercial development, and the damage caused by their loss can be catastrophic.

From Miller’s perspective, people can deny global warming and its link to erosion-causing deluges, “but that will get you in the end. You can be proactive or reactive.”

Nearly 400 acres drain toward the ravine in Forest Park Nature Center. In the 1930s when the ravine was channeled into a small lake, those 400 acres were mostly open ground. However, since then more development, more curbs and gutters, roofs and turf lawns have send a river of water rushing toward the ravine during heavy rainfalls.

“This is just one of many erosion areas around,” Miller said, noting the Peoria Park District is now spending about $250,000 annually on erosion projects.

“Water is causing problems like this all over the country,” he said. “Our hydrologic system is giving the world dysentery. We are flushing water through the system as fast as we can rather than slowing it down.”

The bioswales and cascading pools at Singing Woods are designed to slow water down, giving vegetation time to soak it up.

Hikers can walk on a perimeter path around what used to be a hay meadow that is now transformed into a prairie with native wildflowers and grasses. During various seasons, hikers are serenaded by toads, tree frogs, spring peepers and leopard frogs. Flitting among flowers are swallowtails, monarchs and silver-spotted skipper butterflies. Miller can point to an ephemeral pool that fills with rainwater in spring and dries up in summer.

“If all homeowners would duplicate some of the solutions used here, it would mitigate a lot of the problems,” he said. “This requires people to rethink what an ideal backyard is.”

Development can’t continue without understanding the contours of land and the realization that what’s upstream ends up downstream, Miller said.

Scott Reeise, director of public works for the city of Peoria, said, “Everyone has to realize the devastating impact water can have. There have been changes in weather patterns. We have the same average amount of rainfall but it comes at increased intensity. Those slow drizzles that had time to infiltrate into the ground have become gulley washers. Erosion can start small and magnify in a hurry.”