END_OF_DOCUMENT_TOKEN_TO_BE_REPLACED

Warthog Wheat stretched to the horizon and chattered in a breeze as storm clouds banked in the distance. Harold Wilken and his son Ross were anxious to get out into the field to start harvesting their organic wheat, but before two sweeps through the 75-acre planting, Ross heard an odd noise in the combine.

Another delay for inspection and repair. 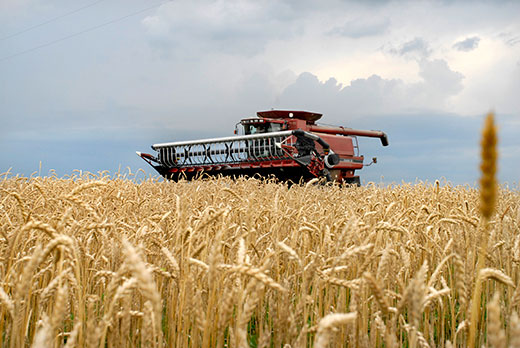 As distant storm clouds creep closer, Ross Wilken races to harvest 75 acres of Warthog Wheat in Iroquois County. Known for its beautiful amber waves, wheat can be especially aggravating for farmers because of its sensitivity to moisture, even humidity in the air, giving farmers a very narrow window for harvest.
PHOTO BY CLARE HOWARD

The Wilkens are adaptable. They are organic pioneers in this part of the country, 100 miles east of Peoria where they farm 2,500 acres organically and are considered leaders in an emerging Midwest grain revolution.

Their wheat ends up not only in artisanal beer brewing companies across the country and a bakery shop in Evanston, but in a state-of-the-art flour milling operation 3 miles up the road in Ashkum, population 700.

Ross designed the milling operation with equipment purchased from Denmark and Seattle and his own innovations. The company in Denmark has been in operation more than a century.

“I’m convinced, milling flour is a combination of art and science,” said Jill Brockman Cummings, manager of the milling operation and an organic farmer herself. Sound is one way she gauges the milling process as grain enters from the top, passes between grinding stones, through a series of sifters and falls into a hopper that she occasionally thumps with a rubber mallet to dislodge flour clinging to the sides. Then she adds “muscle” to the job description, something evident as she hoists and sews closed a 50-pound bag of freshly milled whole-grain Turkey Red Wheat flour. Some will be shipped to a lab at Kansas State University where it’s tested for protein and moisture. Flour from this harvest will end up at Hewn bakery in Evanston, Central Baking Supplies in Chicago and several other outlets. Expansion is planned over the next few months.

Cummings has spent the past two years tweaking operations at this facility, the only local organic flour mill of its size in Central Illinois.

Two mirror images of equipment feed into a central bagging operation. Both sides include 3-foot millstones encased so no flour dust fills the operating room. During the milling process, Cummings constantly checks the heat of the millstones. Too much heat, and the living enzymes in the grain are killed. 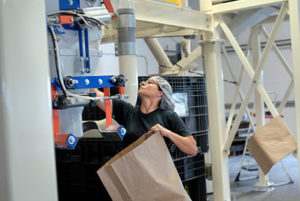 Jill Brockman Cummings thumps the side of a bin to dislodge trapped Turkey Red Wheat flour at a state-of-the-art milling operation in Ashkum, about 100 miles east of Peoria. The organic flour will begin appearing in retail stores this fall under the label “The Mill at Janie’s Farm.”
PHOTO BY CLARE HOWARD

“This is a whole different flour than you buy at the store,” Cummings said. “The flour sold at stores is bromated, bleached and enriched. Everything is taken out then nutrients are added back versus this flour that’s alive, full of living enzymes, bran and grain. It has the nutrients our bodies can digest and utilize.”

Ellen King, owner of Hewn bakery in Evanston, works closely with Cummings and the Wilkens. King is committed to seeking out and using as many local ingredients as she can in her 4-year-old bakery. She and her bakers have been testing flours from Wilken grains.

“The flavor is noticeably different. The crumb is so delicate. We all love to bake with it,” King said, noting that the Warthog is fantastic in scones, brioche and biscotte and the Glenn is “phenomenal” in bread.

Modern commodity flour never varies, she said. It’s a formula that creates consistent protein and moisture. With the Wilken organic grains, King and her bakers learn to respond to the living variations in the flour, a process that is as much art as science.

King is finishing the manuscript for a book on heritage baking using local, stone milled flours. The Wilken operation in Iroquois County will be included in the book. Publisher is Chronicle Books in San Francisco. The book is expected out in the fall of 2018.

Cummings said commercial, store-bought flour commonly comes from grains that are routinely sprayed with glyphosate, the main ingredient in Roundup, two weeks before harvest to insure a uniform dryness.

Wheat is amazingly sensitive to moisture, even from humid air. Organic farmers work with the wheat and the weather while industrial farmers use weed killer to dry it out.

Cummings and the Wilkens visited farms in Oregon and upstate New York learning about the “bread basket revolution.”

Now they plant winter wheat between Oct. 15 and Nov. 1. Spring wheat is planted in April. Warthog is considered an all-purpose winter wheat.

“My wife uses it for all her short breads,” Wilken said. “Flour used to be just an ingredient to bake with. It had no taste. Now she values flour.”

Besides being noted for its taste and beauty, Warthog Wheat grows about 4-feet tall so it shades out weeds. Red clover is planted into the wheat field as a cover crop in February. As the wheat is harvested in July, the clover remains and is later tilled in for added soil nutrient.

“When you farm organically, you don’t just think of the crops you’re raising. You think of the system and building nutrients in the soil. The soil is alive,” Wilken said. “The main nitrogen source for corn is from the clover. The clover minimizes erosion and builds the soil.

“We follow a systems approach. What we do effects the soil years into the future.”

Flour from the Wilken operation will be available this fall labeled “The Mill at Janie’s Farm.” Cummings recommends keeping it refrigerated for up to six months or in the freezer for up to a year.

Wilken agreed, adding, “Treat it like a vegetable. You wouldn’t put fresh green beans in the pantry. Don’t put this flour on a shelf in the pantry.”

The farm is named in remembrance of Harold and Sandy Wilken’s daughter Janie who died in a car accident in 2001 when she was 15. It was a slow recovery for the family. After Janie’s death, the operation took a sharp turn toward organic and was certified organic in 2005. Today, farmers who need help with the arduous process of weaning land from chemicals and transitioning to organic seek out Harold and Ross Wilken and Harold’s nephew Tim Vaske who farms with them on Janie’s Farm.

Visit the website, expected to go up in the next month: