END_OF_DOCUMENT_TOKEN_TO_BE_REPLACED

Editor’s Note: Peorian Mark Clark was 22 and a member of the Peoria NAACP and leader of the Peoria Chapter of the Illinois Black Panther Party. He was running a BPP free breakfast program for children in Peoria. In December 1969, he went to Chicago to meet and train with Fred Hampton, head of the Illinois Black Panther Party. Both men were shot and killed in a police raid on Hampton’s apartment.

“My brother (Mark Clark) said to me, the last words he spoke to me on Thanksgiving Day (1969), less than a week before his death, as he was leaving, going to Chicago. He said to me, ‘I’m doing this because of them.’ And he spoke of my nephew and my daughter (they were preschoolers), ‘I’m doing this for them,’” Elner Clark, 68, of Peoria said at her home on Nov. 17.

“He knew that, he had the political consciousness to know that we as a people, a black people, had been under repression too long. And there needed to be a change. And that is what he was about. Making a change for the next generation. And he did that with the (free children’s) breakfast program (at Ward Chapel AME Church). He wanted to make a contribution. That is what people need to know. He said he did it for the next generation.”

Dec. 4 marks the anniversary of the infamous predawn raid and police killings of Clark and Illinois Black Panther Party leader Fred Hampton in Chicago. Clark was the leader of the Peoria chapter of the BPP and had traveled to the Chicago headquarters for additional training, and more. 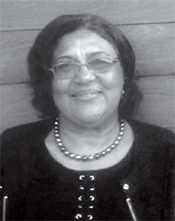 “Mark had spoken with my brother James the day before the killings. And in his communication with James he said that he knew that there was an assassination attempt on Fred Hampton, and he was not going to leave Fred,” Elner Clark said. “He took on the responsibility of being defense captain.”

Mark Clark was only 22 when he was shot down by Chicago police in a pre-dawn raid on a Panther apartment targeting Illinois BPP leader Fred Hampton, who was only 21. Hampton and his colleagues were betrayed by a fellow Panther who provided the police with a layout of the apartment, and who managed to drug Hampton that night. Hampton was shot point blank in the head as he lay on his mattress. Clark was killed in a chair holding a shotgun apparently on security detail and may have fired a shot. The flat was riddled by nearly a hundred police bullets and several other Panthers were shot and wounded.

The one-sided carnage was so obvious that an observer described the scene as “nothing but a Northern lynching.” Internationally renowned U.S. intellectual and scholar Noam Chomsky has reportedly called the killing “the gravest domestic crime of the Nixon administration.” No one was ever convicted in the case that became one of the longest and costliest civil lawsuits in federal court history. A $1.85 million settlement in the early 1980s was split between the raid survivors, families of Hampton and Clark and their lawyers.

The police, in conjunction with the Cook County State’s Attorney office, and federal authorities carrying out its then-secret COINTELPRO operations at the direction of the FBI’s J. Edgar Hoover, were also attempting to assassinate Bobby Rush, the Illinois BPP defense minister and Hampton’s second in command. Luckily he was elsewhere, and went on serve the people of Chicago and more. Rush is the current U.S. Congressman from Illinois’ 1st District, and the only person to ever defeat Barack Obama in a political campaign.

A federal grand jury determined that the police fired between 82 and 99 shots at the people in the flat. Only one shot was proven to have come from a Panther gun. Four other Panthers were wounded.

“It was very horrific that Mark could be killed like that,” Elner Clark recounted when she and her family heard the news of her brother’s death at the hands of police.

No authorities ever contacted the Clark family about the death.

“We waited and we waited and the announcement that came over the news media, on the television and the radio, was when they finally released the information that Mark was deceased. We were never contacted with this information. We heard it over the media. They said he was in Cook County morgue, unclaimed. They said his body had not been claimed. We were appalled. There was no
communication. They knew who he was. They knew who he was,” Elner Clark spoke in a voice of deeply heartfelt emotion 48 years afterwards about the systemic injustice that followed her brother even after death.

“There was no obituary, but the whole city came out, the black community, at Freedom Hall,” she said. “There were probably a thousand people, if not more. Huge. They filed in (to view Clark’s body lying in state wearing BPP jacket and beret) and came out. Rev. Blaine Ramsey (of Ward Chapel AME) gave the eulogy.” The inaccuracies and worse about Clark at the time of his death included prominent editorials by the Peoria Journal Star. “Hate coupled with intimidation and demagoguery made the Panthers into a sort of a black Ku Klux Klan,” wrote the Journal Star on Dec. 10, just days after Clark’s death. “The white sheet was replaced with the black beret and jacket.”

Apparently self defense and demagoguery somehow became the equals of murder, lynching, bombing and torture of innocent men, women and children of color. Who knew?

False comparisons aside, this same central Illinois daily also publicly declared: “And it was finally put together under the Panther label by a coterie of articulate ex-convicts and jobless civil rights activists who duped a few young men who were not overly bright to sell their newspapers and play the cannon-fodder roles of tough-guy revolutionaries.”

The Journal Star made it crystal clear to its overwhelmingly white readership that Mark Clark and his Black Panther Party African-American colleagues were nothing but their worst imaginings of the black males among them. The Dec. 10, 1969 editorial thankfully stopped short of using the n-word, but the labels of ignorant jobless ex-cons for a group of black men (nothing is mentioned about the BPP women) engaged in revolutionary political and civil tactics pretty much tells the reader then and now all they need to know about the racism and paternalistic attitude of Peoria’s paper of record. The editorial was shockingly titled “The Panthers Need Help.”

Requests for comment about the Journal Star’s past editorials were made to Managing Editor Sally McKee. No one from the paper responded by publication time.

Lawrence J. Maushard is an independent writer who has worked in Sandinista Nicaragua, East bloc Hungary, the Islamic Republic of Iran, Mubarek’s Egypt, Boston, Chicago, Portland, Central Illinois, and more. Author of “Made In Managua: a nonfiction account of one journalist’s trip through a telling place and time” (Quimby Archives, Boston 1990) described by the Harvard Crimson as “a superb fresh-out-of-college journalist’s depiction of his jaunt through (Central) America’s most bitter war zone.” More of his work: www.maushard.com & www.maushard.wordpress.com.