END_OF_DOCUMENT_TOKEN_TO_BE_REPLACED

• By the end of November, 4.7 million Americans had registered for disaster aid from the Federal Emergency Management Agency, according to the Washington Post. That’s 10 times more than all of 2016.

• Hurricane Harvey set a U.S. rain storm record. Hurricane Irma set a wind speed record. And while Hurricane Maria was pummeling Puerto Rico — much of which remains without power — Hurricane Ophelia literally blew off the map.

Starting farther east than any hurricane on record, it dropped out of sight at 60 degrees north latitude. The hurricane didn’t end. The National Oceanic and Atmospheric Agency warning chart did. NOAA never anticipated a tropical storm would go so far north.

• In mid-December, insurers were bracing for another possible record, a projected $130 billion in losses from natural disasters. According to the Dec. 13 Wall Street Journal, damages from the three U.S. hurricanes and two earthquakes in Mexico may range from $66 billion to $111 billion. October wildfires in California could add another $9.4 billion. Factor in December’s Thomas Fire in plush areas of that state and total disaster losses could top the record $126 billion paid out in 2011. And, with over 230,000 acres burned, the Thomas Fire was only 15 percent contained by mid-December.

“It’s just more intense, more widespread. We’re about ready to have firefighting at Christmas,” Brown said when surveying the damage last month. “This is very odd and unusual. But it is the way the world is with the kind of carbon pollution that we’re not only living with but that we’re generating still.”

In the first three months of 2017, even before the hurricanes and fires, insured damage from natural disasters in the U.S. was almost $7 billion. About $6 billion was from severe storms — four times the usual average of $1.5 billion — setting a first-quarter record for thunderstorm-related claims.

And that brings us home to Illinois.

“Flooding in urban areas has received increasing attention in the last decade, with at least $2.319 billion in documented damages between 2007 and 2014, of which $1,240 billion were private claims that typically represent basement flooding and sewer backup,” sums the 2015 Illinois Department of Natural Resources “Report for the Urban Flooding Awareness Act.” “Although the largest percentage of insurance claims is from northeastern Illinois, urban flood damages and problems occur statewide in urban areas.”

The Prairie State’s a variable state.

IDNR’s report, a collaboration with nine other governmental agencies, is a proactive response to climate change. Compared to western and southern states, or even some states to the north, the Land of Lincoln hasn’t seen much impact from global warming. Yet. 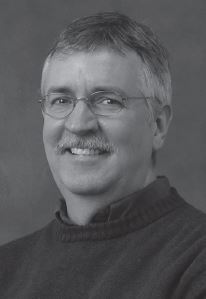 “I would say the effects in Illinois, so far, have not been on the temperature side but on the rainfall. Illinois has been getting 10 to 15 percent wetter over the last century,” Angel said.

But the key dots to connect here are not the averages. Angel says the variability can be harder to handle than the trend. A slightly-above average year can be the result of very unusual weather.

As he noted, temperatures could and often did shift 30 degrees or more in a single day during 2017. According to Midwest Climate Watch, by Dec. 5 more than 100 daily high temperature records for the month were tied or broken, mostly on one day.

“It’s extreme,” Angel said. “It’s not that every rain event is 10 to 15 percent more. We’re getting more of the heavy rain events.”

The impact of variability hits farmers who don’t know when to plant, gardeners battling infestations of Japanese beetles and ice fishers who can’t find a frozen lake. As the residents of tornado-plagued Tazewell County could tell you, lucking out a little bit with such weather depends upon where you’re standing, or where your house was standing.

“Above normal” is a pretty dry term for variable precipitation in a year like 2013. According to the website weather.gov, that year included: 17 inches of snow in Springfield on March 24. Five to 10 inches of rain from Chicago along the Illinois River valley on May 17-18. Twenty-five tornadoes in November, including the EF-4 tornado which leveled a good chunk of Washington. But while there was flooding in northern and Central Illinois, there was drought in Lincoln and Champaign. 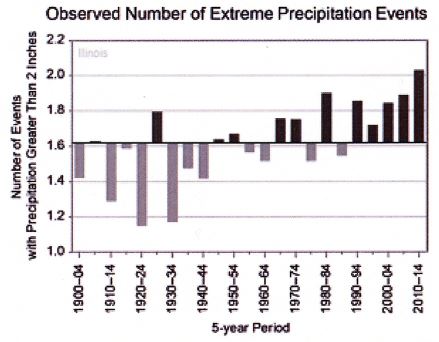 To illustrate the change, the State Climatologist Office for Illinois compiled information about the number of storms which dump two or more inches of precipitation. You can see from the accompanying chart that the numbers have increased sharply since the mid-1980s. The change is even more significant when you realize that “normal” weather is evolving — averages are calculated over the previous 30 years. Grampa had a point: kids these days probably wouldn’t know a real winter if they saw one.

“It’s kind of a moving target,” Angel said. “What would now be considered a cold winter would have been normal in the ‘70s. It’s considerably different.”

So the state is now preparing to chart “once-in-a-hundred year” storms, those with 7 to 8 inches of precipitation. Such storms are coming to Illinois a lot more than once a century. Still, we are indeed a little bit lucky.

In September, Angel blogged about what Hurricane Harvey would have done here. It would have drenched the whole northern portion of the state, including the 9.4 million residents of the Chicago area, with 51 inches of rain. (https://climateillinois.wordpress.com/2017/09/07/hurricane-harvey-over-chicago/)

“That’s (impact) well beyond northern Illinois. It would have wiped out everything downstream,” he said. “It would have made ’93 look like a spring shower.”

What if a monster storm hit during winter? Angel is more about preparing for bad weather than prognosticating it. But an inch of rain can be 10-12 inches of snow. Fifty feet of snow is not a pretty picture. The average temperature here may be warming, but there’s no guarantee for any given January.

Study says the most accurate models are the ones with the worst outcomes:
https://www.washingtonpost.com/news/energy-environment/wp/2017/12/06/the-most-accurate-climate-change-models-predict-the-most-alarming-consequences-study-claims/?utm_term=.757e18ba3b52