END_OF_DOCUMENT_TOKEN_TO_BE_REPLACED

I met Sarah Smelser nearly 20 years ago when she was hired to be the new head of West Virginia University’s print program. She arrived from Pasadena, California, with her husband Jonathan Higgins, and they settled in quickly and founded Manneken Press in the process. In 2002 she joined the print faculty at Illinois State and, as she did at WVU, breathed new life into the program. Sarah is a remarkably inventive and productive artist and the least distracted one I know. She constructs prints whose pigment and texture are exceptionally subtle and intelligent, slowly manipulating secondary and tertiary color to settle deliberately and comfortably in the eye. Geometric asymmetry hovers between pattern and text and at other times between abstraction and figuration — sometimes in the same image.

In a medium that wouldn’t exist without an almost obsessive devotion to craft and the hand, Sarah actually tones down technique. She selects the cleanest and most direct print you can make – the monotype. Her subject is a subtly cool and controlled landscape where particularized observation gradually produces a state of tranquility and formal equilibrium. She begins by allowing previous works or their memories to orient her vision. In that respect her work is an extended play on an ingrained, meditative theme, rather than on isolated observations.

In constant conversation with her image, she establishes a series of patterns on a glass matrix. Delicate Asian paper is laid on the prepared surface and manipulated with a stylus from the back, requiring her to essentially imagine what’s happening on the anterior. This partially veiled process allows for both a controlled as well as spontaneous discourse with materials. It also replicates our ordinary experiences — the kind we all spend summoning, interpreting and embellishing.

Smelser’s conceptual footing is the recalled landscape of Northern California and she enhances memories with abstracted maps of the present. She firmly believes that place and cognition is fundamental and interdependent. The Midwest has contributed to her work as its light and space co-mingles with that of her childhood. 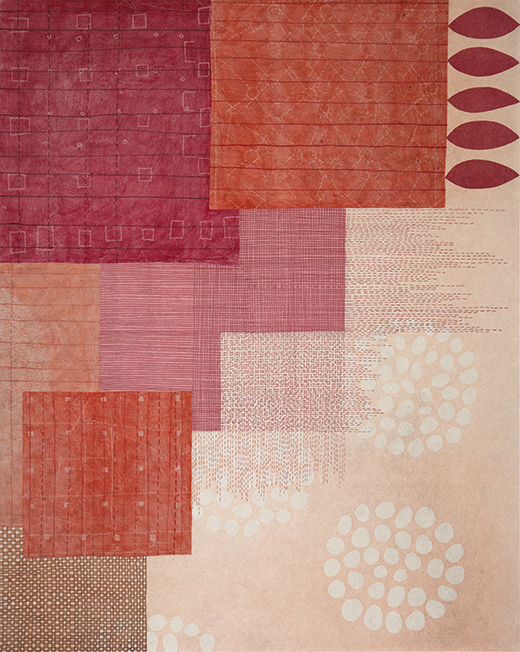 Her prints are an extended narrative about place and identification, and she has ultimately designed a language and architecture to preserve hers. The print,“To Lay Out (Kayla),” is a cantilevered trail of rectangles accompanied by soft representations of rock circles, leaves and sand. Red, orange and magenta squares filled with dotted filaments and faded afterimages confound our expectations of proper composition but are in synch with the naturalistic boundaries and empty spaces that frame them.

Her prints emphasize that all seeing is composing. We comprehend what we experience based on an accumulation of similar events. We can’t visualize without mediation in some fashion and Smelser’s work speaks to the fact that nature is a text, rather than autonomous matter.

Nonetheless she strips the text down to essentials where there’s more commonality with the viewer, few illusions and more distilled presence than seems possible in such gentle studies.

Smelser and her husband will open a show “I’ll Be Your Mirror” at Knox College Feb. 8, with an artist’s lecture at 4:15 p.m. in the Whitcomb Art Center. A reception follows at The Box Gallery, 308 E. Simmons St., Galesburg. The exhibit runs to March 9.

← Art. What Is It Good For? Cartoon Hunter
Op-Ed: The Peoria City Council should vote to conduct “due diligence” of the city’s water system →