END_OF_DOCUMENT_TOKEN_TO_BE_REPLACED

Susanne Nestory has been a resident of Peoria for a little more than a decade. She came from New Jersey as the interim director of Bradley University’s Gallery and Collections and is currently and has been an adjunct professor since 2007. Prior to moving to Peoria, Susanne worked as studio assistant for the extraordinary west coast printmaker, painter and sculptor John Paul Jones and continues to be the manager of his estate. In 1991, she served as a staff participant on Christo and Jeanne Claude’s remarkable Umbrella Project in California and spent four months in McMurdo Station in Antarctica, where she was hired by ITT as part of a service crew for the National Science Foundation.

Later Susanne earned her MFA from the University of Pennsylvania and then taught at Rowan University at Glasboro, N.J. She had several one-person shows in a co-op space in New York City. In short she is a multi-disciplined cultural worker, a gifted painter whose experiences are as rich as they are sometimes daunting.

Her mentor at the University of Pennsylvania was Robert Slutzky a distinguished abstractionist and an authority in architectural theory and pedagogy. Slutzky was a student of the modern master Joseph Albers who instilled a respect for the formal complexities of geometry and color as a critical subject in his students. Under his watch, Susanne gradually developed a distinctive capacity for shaping compositional structures by means of glassy planar spaces. This more autonomous work, allows the eye to skim the surface, suspended just enough to absorb the image as a studied response to existing art language.

Nestory’s love of surface and her slanted and re-apportioned formalism derives in part from an attraction to the pioneering painter Jack Tworkov. Tworkov is famous for his late work which unexpectedly abandoned his aggressive Abstract Expressionist grammar for a flatter, more contemplative lattice framework. Nestory became attached to his work’s deliberative geometry which he drew from classical roots. She came to appreciate the risk he took in reclaiming mathematical principals like the golden ratio, a compositional strategy evident since 1200 in Western architecture.

Nestory’s identity as an artist has always been influenced by location, and she finds the flatness and subtlety of Central Illinois a principle in the associative dimensions of picturing. Her new paintings exhibit a nature/culture frame, comparatively architectural but full of agri-texture floating in a flattened, almost Asian depiction of landscape.

Her canvases are carefully designed, but they’re also about touch– brush–marks, organic contours and daubs of ambient color that reflect her perception of space which she acknowledges as uniquely present in the Midwest.

In Illinois, horizons dominate. You don’t have to look up to see sky. And the culturally visible isn’t clouded by myth or fashion. Instead the visible confronts and circumscribes us. Directions are based on mathematical formula, not romance. Very little is obscured or unnecessarily decorated.

Nestory’s remarkable work pictures the axis, the interior and distance simultaneously and reveals a particular sensitivity to space. Her painting logic is akin to mapping. It supersedes roots or rootlessness. It’s reflective, flexible, and transferable – key traits not always in sync with a part of the country generally seen as a refuge. Instead Nestory features place and identity as epistemologically deferred in a state of re-birth and reclamation. 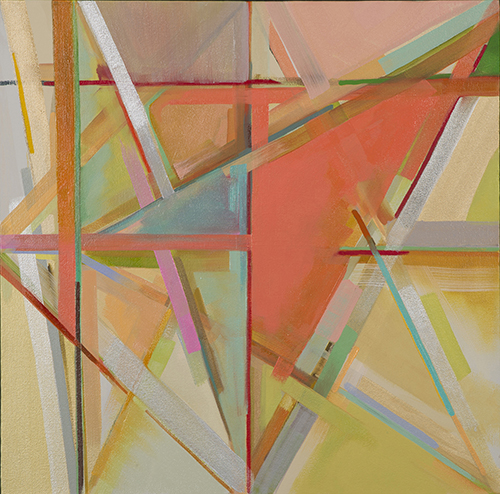