END_OF_DOCUMENT_TOKEN_TO_BE_REPLACED

As 2019 draws to a close, folks who are birdwatchers tend to avoid cabin fever by getting out and conducting the annual Christmas Bird Counts. This year marks the 120th year of National Audubon’s CBC. As I was preparing information for the Peoria Count, I was looking back at older data. National Audubon has a lot of records of past bird counts dating all the way back to the first count in 1900. In particular, I was curious about one of the most flamboyant and striking birds we can see –– the Pileated Woodpecker. This bird has a striking red crest and black and white body. They are our largest species of woodpecker and are about the size of a crow. Their raucous activity in the winter forest is a sight to behold, and luckily, their numbers have been growing locally for some time.

Even though Pileated Woodpeckers have become more common in our woods, actually seeing them can be a challenge. You would think that a large black and white bird with a red crest would be easy to spot, but they can be pretty secretive. You will often hear them before you see them. Their loud “cuck, cuck, cuck” call sounds similar to a Northern Flicker (another species of woodpecker), but it is slower and louder. During the spring when they excavate a tree-hole for a nest, the sound of their pounding can carry far into the forest. They often nest in creek-valleys and will build their nests in the dead branches of large cottonwood and sycamore trees. They only use the nest for one season and will raise only one brood of 3-5 young. Once they are done with a nest, it is often used by flying squirrels or screech owls the following year. 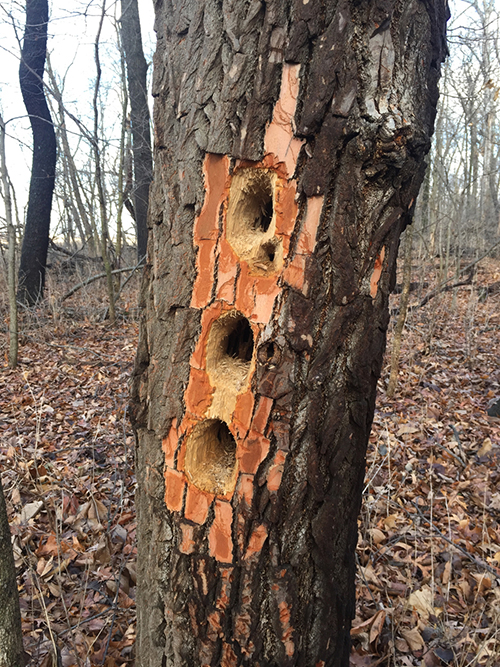 PHOTO BY MIKE MILLER
Evidence of a Pileated Woodpecker feeding at a sassafras tree in Singing Woods Nature Preserve.

When you walk through a woods that is home to a family of Pileateds, keep your eyes open for evidence that they have been feeding. They particularly enjoy tearing apart Sassafras trees in search of carpenter ants. In the process they will leave several rectangular shaped holes up and down the trunk. These holes will go deep to the center of the tree where the carpenter ants have built their galleries. Their ability to tear apart wood in amazing to watch. I had the opportunity to observe a Pileated feeding, and they can throw large chips effortlessly. It is like watching a skilled lumberjack using an axe on a tree.

As you wander the woods this winter keep your eyes and ears open for this remarkable bird. Native American legend often cites that the woodpecker is a harbinger of opportunity and change. The recent increase in Pileated numbers in our region certainly gives us hope that nature can bounce back and the future will be bright.

← Inland Art | Inside the Matrix: The Radical Designs of Ken Isaacs
OpEd | Earning a living should not be curtailed due to discrimination over sexual orientation →