END_OF_DOCUMENT_TOKEN_TO_BE_REPLACED

The first time I became acquainted with a Sandhill Crane was 40 years ago canoeing in northern Minnesota. They had a nest on the ground, at the edge of the marsh, built from cattail and other vegetation. Their rattling-bugle call was loud and echoed through the still, early morning air. Its call sounded ancient, like it had been singing it for thousands of years. It was a sound that was meshed with the landscape of glacial bogs and wetlands. It made this place “complete” somehow.

The next time I experienced Sandhills was along the Platt River in Nebraska on a cold March morning. Tens of thousands of Sandhills were flocked along the wide river valley, their morning calls came with the sun, and the river valley came alive with a sound as ancient as the one I heard in a lake some 700 miles away. That Minnesota crane could very well be amongst the thousands that were along the Platt River. This is an important stop on their spring migration from wintering grounds along the Gulf Coast, Southwest United States and Mexico. 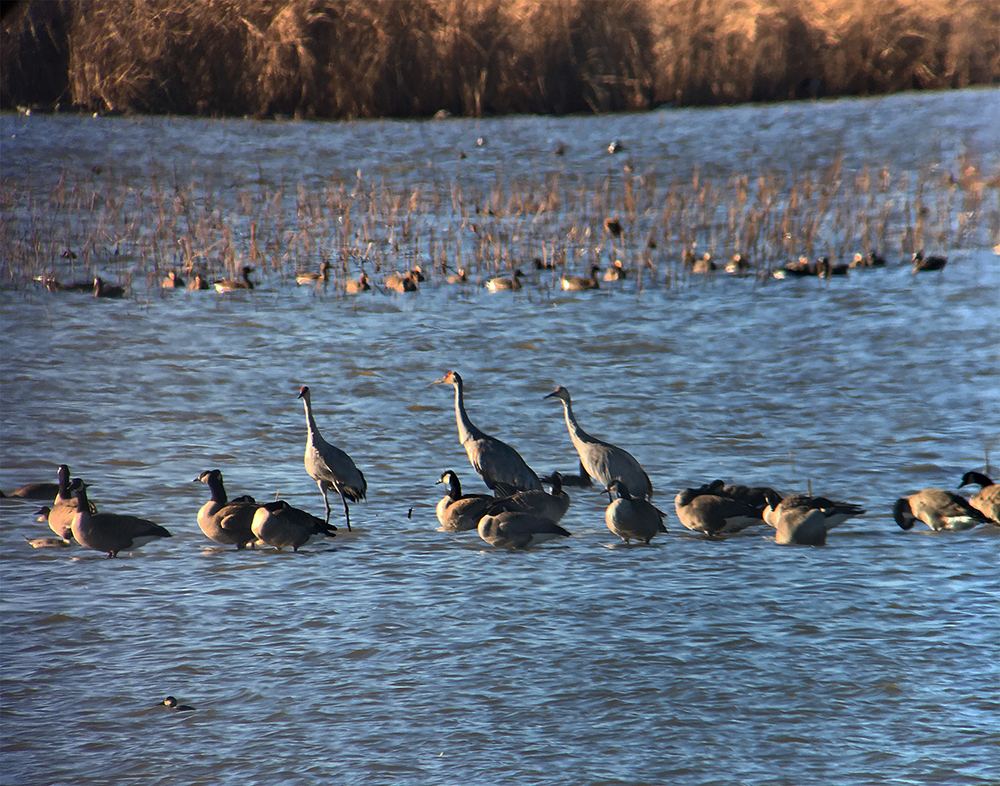 My most recent Sandhill sighting was this fall at the Sue and Wes Dixon Waterfowl Refuge near Hennepin, Ill. This property is a restored natural area owned and managed by The Wetlands Initiative (TWI), a private land trust and conservation organization. Sandhill Cranes took up residence there after TWI restored a 3,000-acre levee and drainage district into a mix of wetlands, prairies and marshlands. In addition to the resident birds that are nesting there, the site is also being used by migratory Sandhills in the spring and fall.

Sandhill Cranes have made a dramatic comeback in recent decades. In the 1930s they were pretty much extirpated east of the Mississippi River. Wetland restoration and dedication of organizations such as the International Crane Foundation have allowed this species to once again thrive in their former range. The Sandhill Cranes we see in Illinois tend to come from a population that nests in Wisconsin and Michigan and winters in Georgia and Florida. This eastern population is estimated to be just shy of 100,000 birds.

Growing populations of Sandhill Cranes and numerous wetland restoration projects in Illinois have restored hope that this species will become a more frequent nester in Central Illinois. Today, only a handful of nests are known in our area. The International Crane Foundation is partnering with local conservation organizations including Illinois Audubon, Peoria Audubon, The Wetlands Initiative, and The Nature Conservancy to establish a method of documenting nesting populations along the Illinois River valley. This spring, a Crane Count will be conducted in select locations to get baseline data to understand how Sandhill Cranes are using our local wetlands. As the years go on, this baseline will give us a good understanding of how successful these birds are in nesting in our wetlands.

It has been a long time since the rattling-bugle calls of Sandhill Cranes have been a part of our landscape. Once you hear this call, your heart will tell you that the soundscape of Illinois is incomplete without it. Aldo Leopold said it well; “When we hear his call we hear no mere bird. We hear the trumpet in the orchestra of evolution. He is the symbol of our untamable past, of that incredible sweep of millennia which underlies and conditions the daily affairs of birds and men.” Marshland Elegy, A Sand County Almanac.